The largest and oldest power cooperative in Texas is filing for bankruptcy protection, citing last month’s winter storm that left millions without power, and it is unlikely to be the last utility to seek shelter in the courts. 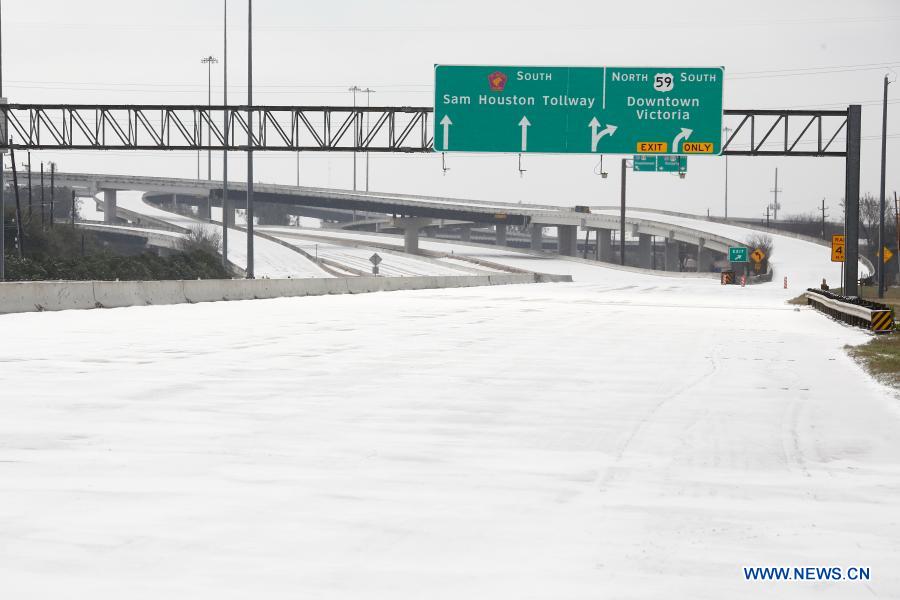 A highway is closed due to snow and ice in Houston, Texas, the United States, on Feb. 15, 2021. Up to 2.5 million customers were without power in the U.S. state of Texas Monday morning as the state's power generation capacity is impacted by an ongoing winter storm brought by Arctic blast. (Photo by Chengyue Lao/Xinhua)

Brazos Electric Power Cooperative serves distributors that supply electricity to more than 1.5 million Texans in 68 counties from the Panhandle to Houston. Brazos said Monday that it was a “financially robust, stable company” before the Arctic freeze that hit Texas between Feb. 13 and Feb. 19.

It said it received excessively high invoices from the Electric Reliability Council of Texas, or ERCOT, which operates the state power grid, for collateral and the cost of electric service. The invoices were required to be paid within days.

As a cooperative, Brazos’ costs are passed through to its members and retail consumers served by its members. Brazos decided that it won’t pass on the ERCOT costs to its members or the consumers, so it filed for Chapter 11 protection, which indicates that the company plans to reorganize its debts rather than liquidate.

“Let me emphasize that this action by Brazos Electric was necessary to protect its member cooperatives and their more than 1.5 million retail members from unaffordable electric bills as we continue to provide electric service throughout the court-supervised process,” Clifton Karnei, executive vice president and general manager of Brazos, said in a statement.

There could be more. Ed Hirs, who teaches energy economics at the University of Houston, is sure there will be more power company bankruptcies. He cited estimates by BloombergNEF that Texans will pay $50 billion for electricity the week of Feb. 14 compared with $4.2 billion the previous week.

Hirs said the difference will be paid in higher electric rates or borne by taxpayers. Already, Gov. Greg Abbott, a Republican, and both Republican and Democratic legislators have promised to help Texans facing huge bills.

“The consumer and the taxpayer are pretty much one and the same,” Hirs said. “Whether it comes out of your left pocket or out of your right pocket, it’s coming out of your pocket.”

Some consumers have already received February bills in the thousands of dollars. Most if not all of them had plans tied to the wholesale price of energy, which skyrocketed when the state’s main electric grid lost 48% of its power while demand soared to heat homes as temperatures plunged into the single digits.

The Brazos bankruptcy filing came the same day that Texas Attorney General Ken Paxton said that he is suing Griddy, a company that sold wholesale-rate plans, for passing along massive bills to its customers. The lawsuit accuses Griddy of violating a state law against deceptive trade practices, and it seeks refunds for customers.

ERCOT shifted about 10,000 Griddy customers to other utilities on Friday, which the company said effectively shut it down.

“We have always been transparent and customer-centric at every step,” Griddy said in a statement. “We wanted to continue the fight for our members to get relief and that hasn’t changed.”

When a polar vortex reached Texas last month, much of the state’s power grid collapsed, followed by its water systems. Millions huddled in frigid homes. Others fled for safety. The state, long suspicious of regulation and outsiders, was left to seek aid from the federal government and humanitarian groups to help its 29 million people.

Brazos was one of six electric cooperatives that were put on watch last Friday for possible credit-rating downgrades by Standard & Poor’s. Although S&P judged each company’s debt to be investment-grade, it warned of pressure to raise rates and the potential for more regulation.

The others on S&P’s radar: Brownsville, at the southern tip of Texas on the Mexican border; Garland Power & Light in the Dallas suburbs; Georgetown, an Austin suburb; Golden Spread Electric Cooperative in the Panhandle; and the Lower Colorado River Authority, which manages hydroelectric, natural gas and coal-fired power plants across more than 70 Texas counties.

S&P also slapped a credit watch on San Antonio’s public electric and gas systems, saying that the higher cost of providing electricity and natural gas during the freeze week will add to the utility’s debt, put pressure on its ability to set rates, and potentially weaken its financial performance.

Not all energy companies in Texas are suffering because of the freeze.

While many Texans were still without power on Feb. 17, Roland Burns, the president and chief financial officer of Comstock Resources Inc., was telling analysts that the natural gas company was profiting nicely from the spike in prices, which started even before the Arctic weather arrived.

“Obviously this week is like hitting the jackpot as some of these incredible prices, I mean frankly we were able to ... get super-premium prices,” Burns said.