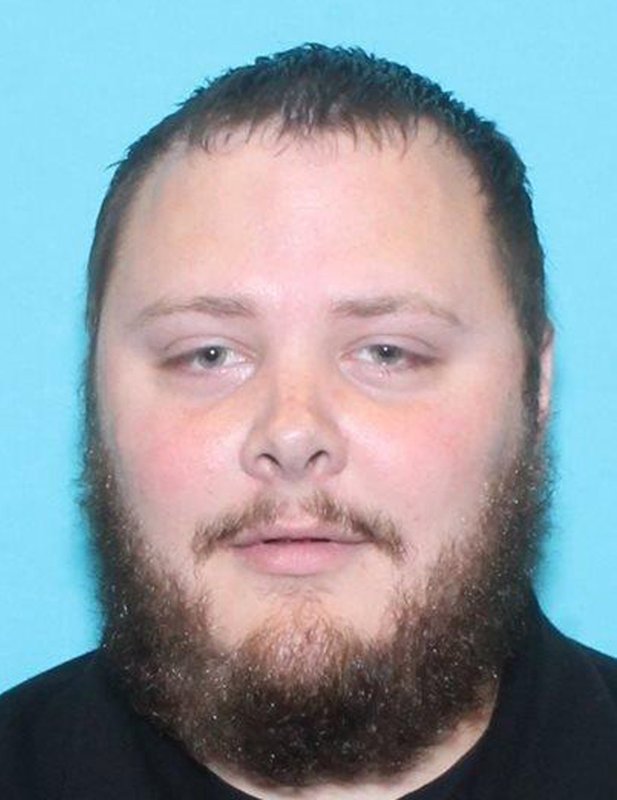 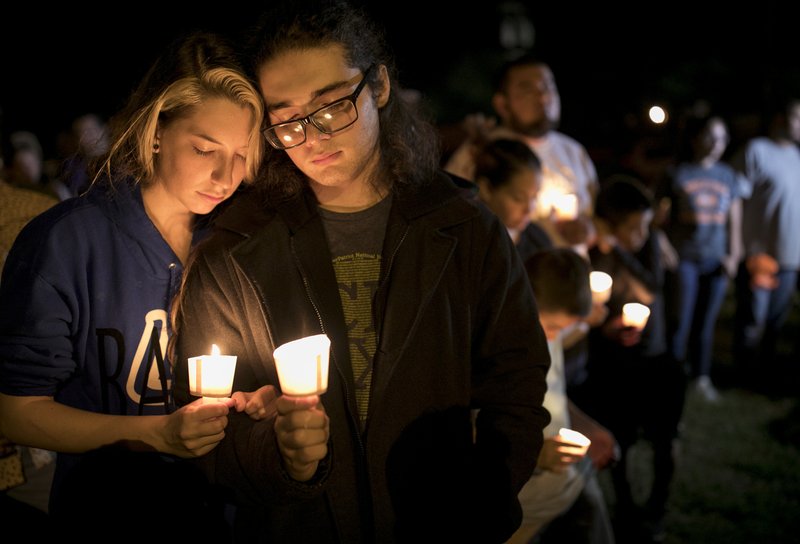 Bailedy LeJeaune,17, and David Betancourt, 18, hold candles during a vigil in Sutherland Springs for the victims of a deadly shooting at the First Baptist Church in Sutherland Springs, Texas, Sunday, Nov. 5, 2017. A man opened fire inside of the church in the small South Texas community on Sunday, killing more than 20 people. (Jay Janner/Austin American-Statesman via AP) 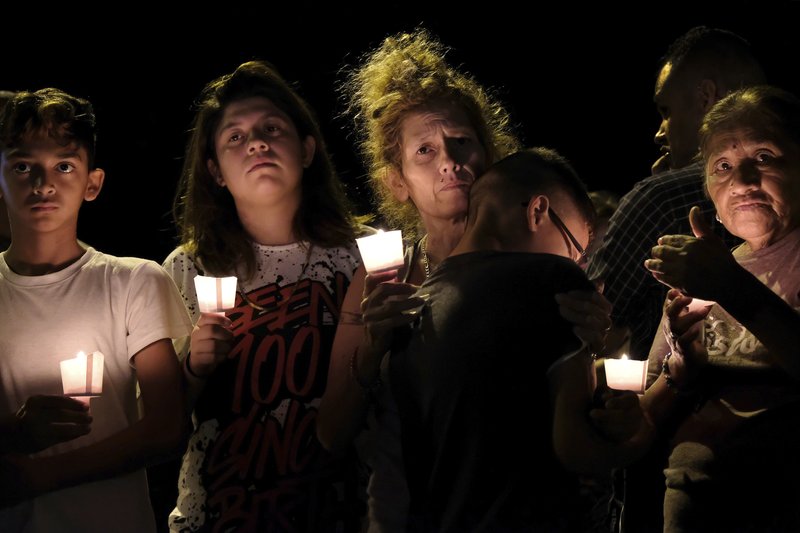 From left are Christopher Rodriguez, Esmeralda Rodriguez, Mona Rodriguez, Jayanthony Hernandez, 12, and Juanita Rodriguez participate in a candlelight vigil for the victims of a fatal shooting at the First Baptist Church in Sutherland Springs, Texas, Sunday, Nov. 5, 2017. (AP Photo/Laura Skelding)

The gunman who opened fire on a Texas church recently began working as a security guard at a vacation resort near his home outside of San Antonio, a manager at the resort said Monday.

Claudia Varjabedian told The Associated Press that Devin Kelley had been working at Summit Vacation Resort in New Braunfels for the past month and a half and “seemed like a nice guy.” She said he worked unarmed on his shift as the day security guard and didn’t give her any problems.

“I had no complaints. I was as shocked as anyone else,” said Varjabedian.

The riverside resort in the Texas Hill Country is near Kelley’s apparent home off a rural highway in New Braunfels, Texas, about 35 miles (56 kilometers) from Sutherland Springs.

Kelley had a history of trouble long before he opened fire Sunday at the First Baptist Church of Sutherland Springs, Texas, killing 26 people and wounding about 20 others.

He had been discharged from the Air Force for assaulting his wife and child, according to an Air Force spokeswoman.

He served 12 months’ confinement after a 2012 court-martial. He ultimately received a bad conduct discharge and reduction in rank, the spokeswoman, Ann Stefanek, said Sunday.

She said Kelley served in Logistics Readiness at Holloman Air Force Base in New Mexico from 2010 until his discharge in 2014. His job was responsible for moving passengers, cargo and personal property in military transportation.

Court records in El Paso County indicate Kelley was cited on Aug. 1, 2014, when he lived in a mobile home park near Colorado Springs. He was given a deferred probationary sentence and was ordered to pay $368 in restitution. The charge was dismissed in March 2016 after Kelley completed his sentence.

The Denver Post reports court records indicate someone was granted a protection order against Kelley on Jan. 15, 2015, also in El Paso County.

A U.S. official told the AP that Kelley doesn’t appear to be linked to organized terrorist groups. The official said investigators are looking at social media posts Kelley may have made in the days before Sunday’s attack, including one that appeared to show an AR-15 style semi-automatic weapon. The official requested anonymity because the person did not have authorization to speak publicly.

Local records of an August traffic ticket issued in New Braunfels, Texas, for an expired registration and not having auto insurance give a birthdate that would make him 26 years old.

At the address listed for Kelley in New Braunfels, sheriff’s deputies were still blocking the gate to his property Monday morning. Several messages left for his relatives went unreturned.

Neighbors said that they heard intense gunfire coming from the direction of the address listed for Kelley in recent days.

“It’s really loud. At first I thought someone was blasting,” said Ryan Albers, 16, who lives across the road. “It had to be coming from somewhere pretty close. It was definitely not just a shotgun or someone hunting. It was someone using automatic weapon fire.”

A person matching Kelley’s name and date of birth also registered in 2014 to vote in Colorado, with an address listed in Colorado Springs, home of the U.S. Air Force Academy. The Colorado Secretary of State’s office lists his registration now as inactive.

According to Texas Department of Public Safety regional director Freeman Martin, the gunman arrived at a Valero gas station near the First Baptist Church of Sutherland Springs at around 11:20 a.m. Sunday. He was dressed in black, wearing tactical gear and a ballistic vest.

He crossed the street to the church, left his vehicle and started firing a Ruger AR assault-type rifle at the church. Then he entered the church and fired.

As he left the church, the shooter met an unidentified area resident with his own rifle who pursued him. The suspect was found dead in his vehicle near the border between Wilson and Guadalupe counties. Wilson County Sheriff Joe Tackitt said investigators believe he died of a self-inflicted gunshot wound.