WORLD Texas wants to build its own wall on border

Texas wants to build its own wall on border 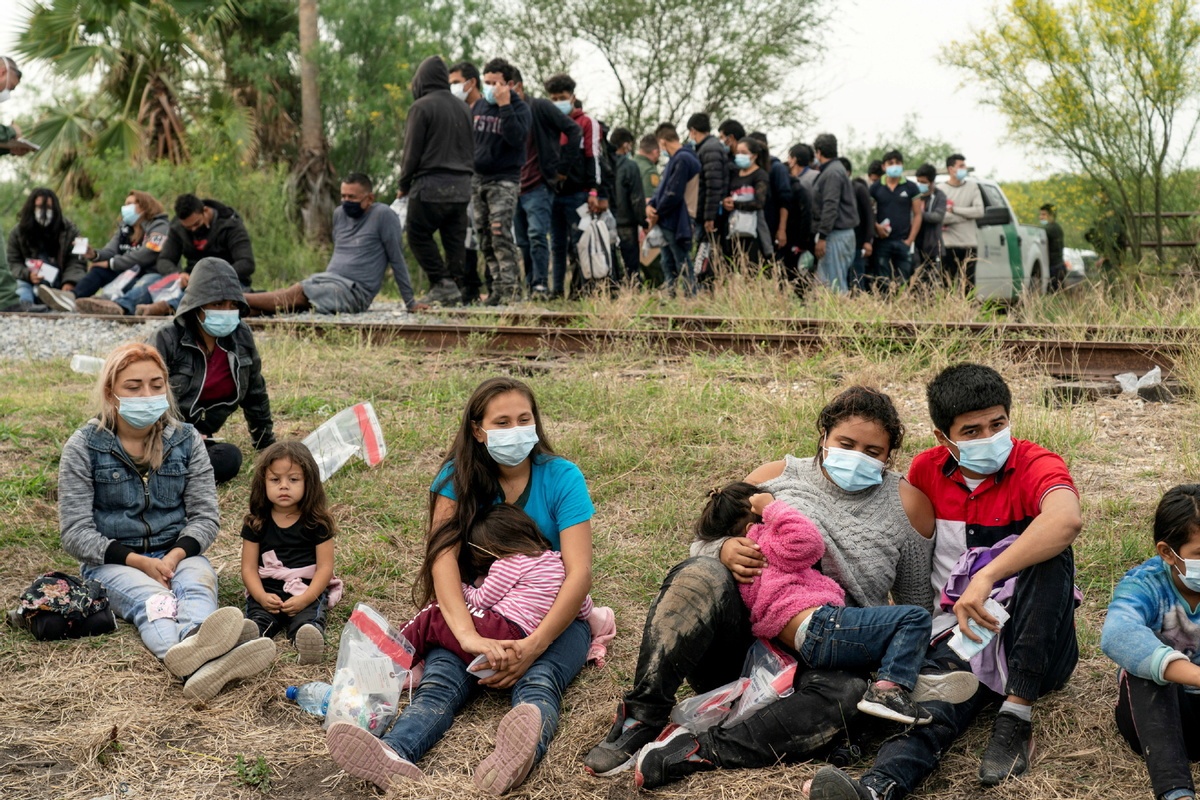 Asylum-seeking migrant families wait to be transported by the US Border Patrol after crossing the Rio Grande river into the United States from Mexico in La Joya, Texas, US, April 27, 2021. [Photo/Agencies]

With illegal border crossings into the United States at a 20-year high, the governor of Texas wants to build a wall between his state and Mexico.

"President Biden's open-border policies have led to a humanitarian crisis at our southern border as record levels of illegal immigrants, drugs and contraband pour into Texas," Governor Greg Abbott, a Republican, said Thursday in his border "summit" in the Texas city of Del Rio. "While securing the border is the federal government's responsibility, Texas will not sit idly by as this crisis grows."

Abbott, who said he would sign state budget bills that allocate more than $1 billion for border security, said he would provide specifics on the wall plan this week

US authorities intercepted more than 180,000 migrants in May, a two-decade high according to Customs and Border Protection (CBP) data released last week.

Abbott announced that Texas and Arizona will invoke the Emergency Management Assistance Compact, in which Abbott and Arizona Governor Doug Ducey, also a Republican, are asking other states to send law enforcement officials to assist in arresting and jailing migrants. The two governors also are seeking resources such as drones and helicopters to help landowners dealing with damage to their property.

"States don't have authority over immigration and our borders; that's a federal authority," Domingo Garcia, national president of the League of United Latin American Citizens, told The Texas Tribune. "It's not constitutional, and we're planning to challenge it in court once we see the final order."

Natalie Nanasi, a professor of immigration law at Southern Methodist University, told CBS Dallas/Fort Worth, "I'm guessing that the federal government absolutely will step in and try to prevent this.

"The federal government has international obligations to protect vulnerable populations to ensure that asylum seekers with credible claims are not returned to their home countries," she said.

The latest CBP data also show an increase in the number of migrants from outside of Mexico and Central America. CBP detained 40,067 from other countries last month, compared with 9,671 in January. Some of those migrants came from Brazil, Cuba, Ecuador, Haiti and from African nations, The Washington Post reported.

The number of unaccompanied teenagers and children arriving at the southwest border, however, dropped last month to 14,158 from 17,148 in April.

The Biden administration is using a pandemic emergency rule called Title 42, which allows border agents to quickly turn away most single adults and many families and turn them over to Mexican authorities. The administration, however, has exempted unaccompanied minors from the policy.

"The large number of expulsions during the pandemic has contributed to a larger-than-usual number of noncitizens making multiple border crossing attempts, and means total encounters somewhat overstate the number of unique individuals arriving at the border," the CBP said in its monthly operational release Wednesday.

Thirty-eight percent of encounters in May were "individuals who had at least one prior encounter in the previous 12 months", compared with an average one-year re-encounter rate of 15 percent for fiscal years 2014-2019, according to CBP data.

Also, the Biden administration on Friday announced plans to return to the Pentagon roughly $2 billion in unspent military construction funds diverted by the Trump administration for a border wall, which was former president Donald Trump's signature issue.

On the day of his inauguration, President Joe Biden issued an executive order halting construction of the border wall.

"Under the agency plans for border wall funds, no more money will be diverted for the purposes of building a border wall, and DOD (Department of Defense) has started cancelling all border barrier projects using the diverted funds," the White House Office of Management and Budget (OMB) said in a release.

"DOD is also announcing today that it is returning the more than $2 billion remaining in unobligated military construction funds to 66 previously deferred projects in 11 states, 3 territories, and 16 countries. This action will restore funds for on-base schools, hangars, housing, and essential operational and training facilities."

The OMB also criticized the cost of Trump's border wall effort, saying, "In total, the previous Administration built 52 miles of wall where no barrier previously existed, with some wall segments costing American taxpayers up to $46 million per mile.

"Building a massive wall that spans the entire southern border and costs American taxpayers billions of dollars is not a serious policy solution or responsible use of Federal funds," the OMB said.

Vice-President Kamala Harris traveled to Guatemala and Mexico last week where she met with the leaders of both nations to discuss ways to stem the flow of migration.

"Do not come. Do not come," she repeated in Guatemala, which some Democrats said was too blunt, while some Republicans have criticized her for not yet visiting the US border with Mexico.