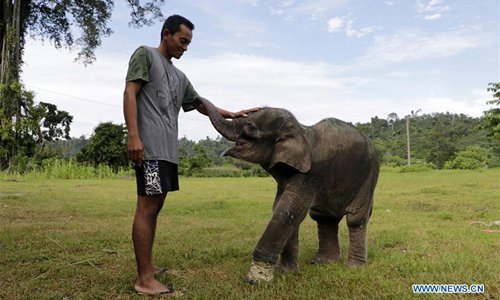 Thailand's Mana Srivate has performed dozens of resuscitation attempts in his 26 years as a rescue worker, but never before on an elephant.

Mana was called into action while off duty on a road trip late on Sunday, successfully reviving a baby elephant struck by a motorcycle while crossing a road with a group of wild pachyderms in Chanthaburi Province.

In a video that went viral on social media in Thailand on Monday, Mana is seen giving two-handed compressions to a small elephant lying on its side as colleagues a few meters away treat a dazed and injured motorcycle rider on the floor.

Both the rider and elephant were recovering and neither had serious injuries.

"I assumed where an elephant heart would be located based on human theory and a video clip I saw online," Mana told Reuters by phone.