WORLD Thai economic sentiment in 2nd half of 2019 to improve from 1st half: KResearch

Thai economic sentiment in 2nd half of 2019 to improve from 1st half: KResearch

Bangkok (People's Daily) - Kasikorn Research Center (KResearch) has revised its forecast for Thai GDP growth downward to 3.1 percent from the initial projection of 3.7 percent, due to the lackluster performance of the export sector, which has been impacted by slowing global trade in the wake of a simmering trade war between the US and China. 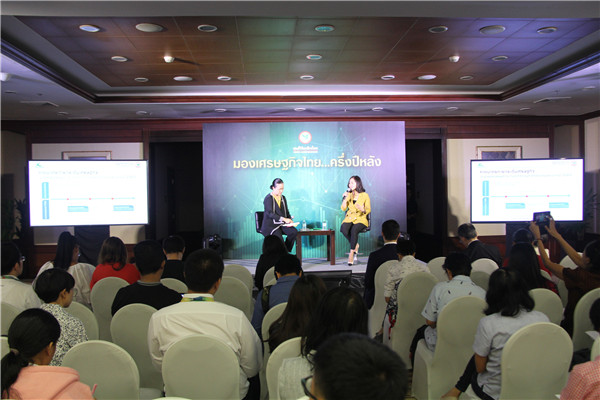 During a seminar titled “Thailand’s Economic Outlook in 2H19”, Nattaporn Triratanasirikul, KResearch assistant managing director, said that global trade for the remainder of 2019 will continue to face challenges from the possibility of the Trump administration imposing tariffs on an additional $325 billion worth of Chinese goods.

Hence, KResearch has revised its export growth forecast sharply downward, to zero percent, from the original projection of 3.2 percent. Close attention should be paid to the outcome of the G20 summit and any possible resolution to the political skirmish between the US and China, as well as the strong Thai baht. If the trade talks show positive signs, the growth of Thai outbound shipments may move back into positive territory and drive Thai GDP to the upper end of the KResearch revised projection of GDP growth, between 2.9 and 3.3 percent.

Even though GDP for full-year 2019 may exhibit slower growth, KResearch forecasts that the Thai economy in the second half of 2019 is likely to be brighter than in the first half due to the lower base of last year and the stimulus measures likely to be implemented by the new government in line with what was announced during the campaign for the March election, including the so-called “Pracharat” policy, price guarantees for agricultural products, and other pressing policies to cushion the impacts of the looming global economic slowdown. These initiatives are forecast to offset the expected delay in the financial year of 2020 budget disbursement.

Regarding interest rate trends, the Bank of Thailand’s Monetary Policy Committee is seen as keeping the policy rate intact at 1.75 percent for the rest of this year, prioritizing stability while also closely monitoring several risks to the Thai economy.

For loans of domestically-registered commercial banks, Nattaporn views that loan growth for 2019 may stand at 4.5 percent, down from the previous projection of 5 percent due to reduced business loans in line with slower economic growth and housing loans during the rest of this year, given the surge of demand before implementation of the LTV measure.