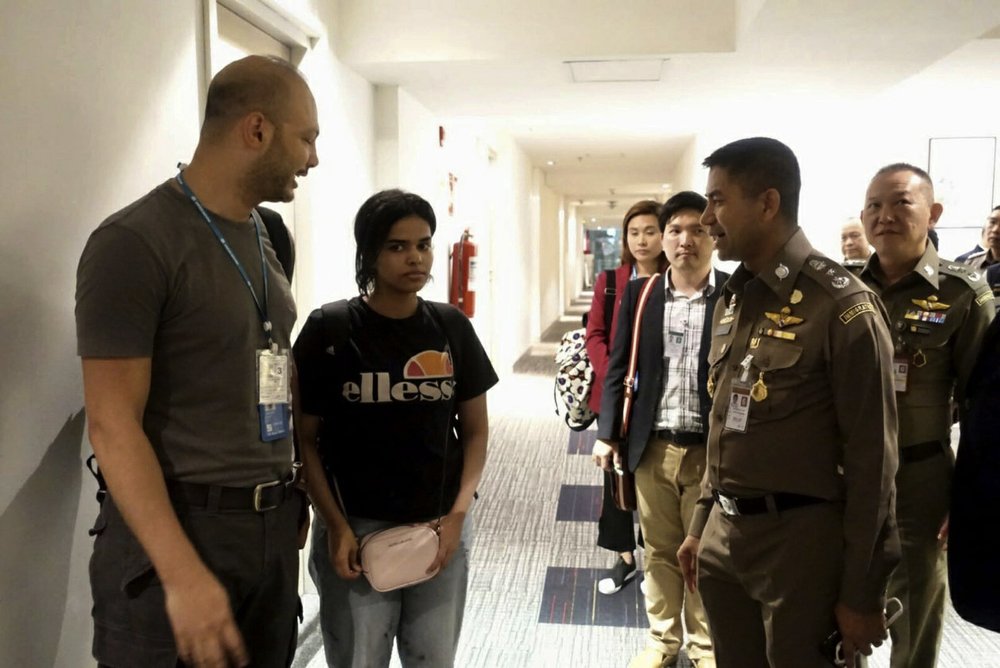 Thailand’s immigration police chief met Tuesday with officials from the Saudi Embassy in Bangkok, as Saudi Arabia tried to distance itself from accusations that it attempted to block a young woman’s effort to flee from her family and seek asylum abroad.

Rahaf Mohammed Alqunun arrived in Bangkok from Kuwait late Saturday after slipping away from her family, whom she accused of abusing her. The 18-year-old was stopped by officials in Thailand who confiscated her passport.

Her urgent pleas for help over Twitter from an airport hotel room garnered tens of thousands of followers and the attention of the UN’s refugee agency, the UN High Commissioner for Refugees. Public pressure prompted Thai officials to return her passport and let her temporarily stay in Thailand.

Alqunun alleged several times that Saudi officials were involved in seizing her passport. However, in repeated statements, including one issued Tuesday, the Saudi Embassy in Thailand said it is only monitoring her situation.

Its latest statement, which described Alqunun’s case as a “family affair,” said Saudi Arabia did not demand her deportation back home. The embassy — and Thai officials — earlier also said that Alqunun was stopped by Thai authorities in Bangkok because she did not have a return ticket, a hotel reservation or itinerary to show she was a tourist, which appeared to have raised a red flag about the reasons for her trip.Thailand’s immigration police chief, Maj. Gen. Surachate Hakparn, told reporters Tuesday that Saudi diplomats told him they are satisfied with how her case had been handled.

“The position of two countries on this matter is the same — that the priority is to provide her safety. We are both concerned for Miss Rahaf’s safety and well-being,” Surachate said.

He said Alqunun’s father and brother were due to arrive soon in Bangkok, but that it was her decision whether to meet with them. On Twitter, she has expressed fear of such a meeting. The father had previously been expected Monday night.

A spokesman for the UN High Commissioner for Refugees at its Geneva headquarters, Babar Baloch, said it could take several days for the agency to look into Alqunun’s claims. He said it was “too early to tell” if she will be granted asylum or refugee status.

Baloch noted the power of social media in making her plight a matter that officials could not ignore.

“For us, all individual cases are alike. It’s different the way we get access to those individuals ... (what’s) different in this case is the wave of all of the voices of solidarity and support came together, joined up in terms of caring for this individual,” he said. “This should be the standard for any individual who claims that his or her life is in danger.”

Saudi Arabia’s human rights record has come under intense scrutiny since the killing of Saudi writer Jamal Khashoggi in October. Khashoggi, who wrote critically of Crown Prince Mohammed bin Salman in columns for The Washington Post, had been living in self-imposed exile before he was killed and dismembered inside the Saudi Consulate in Istanbul by Saudi agents.

The kingdom offered various shifting accounts of the circumstances of his death before eventually settling on the explanation that he died in a botched operation to forcibly bring him back to Saudi Arabia.

Some female Saudi runaways fleeing abuse by their families have been caught trying to seek asylum abroad in recent years. Saudi activists say the kingdom, through its embassies abroad, has at times put pressure on border patrol agents in foreign countries to deport the women back to Saudi Arabia.

In 2017, Dina Ali Lasloom triggered a firestorm online when she was stopped en route to Australia, where she planned to seek asylum. She was forced to return to Saudi Arabia and was not publicly heard from again, according to activists tracking her whereabouts.

Australian national broadcaster ABC reported that the country’s Home Affairs Department announced late Tuesday that it would consider Alqunun’s application for asylum if she was found to be a genuine refugee, and called on Thai authorities and UNHCR to assess her claim as quickly as possible.

Human Rights Watch earlier called on the Australian government to allow Alqunun’s entry into that country, amid worries about her visa status.

The organization’s Australian director, Elaine Pearson, said she had seen electronic confirmation of her tourist visa, but that Alqunun could no longer access her visa page on Australia’s immigration website on Tuesday, sparking concern that the document had been canceled. An Australian visa is usually processed electronically and not stamped in one’s passport, but confirmed by a document that the visitor can print out.

Since Australia has expressed concern in the past about women’s rights in Saudi Arabia, it should “come forward and offer protection for this young woman,” Pearson said.