Thailand carries out first execution since 2009 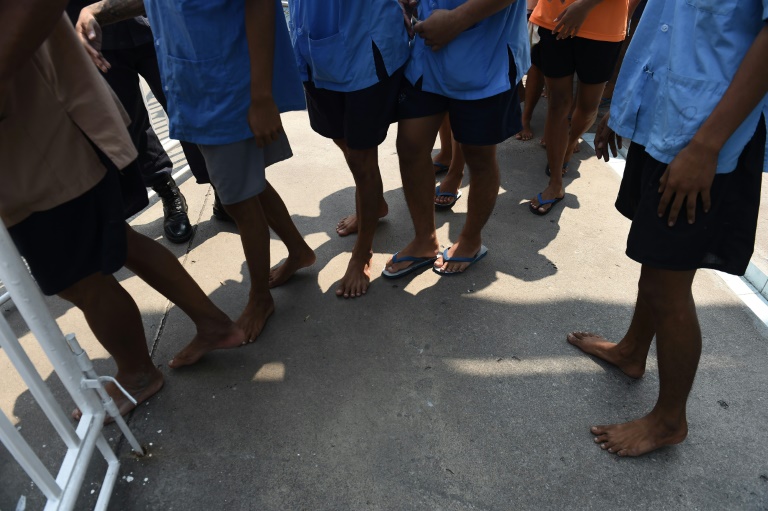 Thailand's Department of Corrections, which oversees one of the world's largest prison populations, said 325 convicts have been executed since 1935 (photo: AFP)

Thailand has carried out its first execution since 2009, putting a 26-year-old convicted murderer to death by lethal injection in a move condemned by Amnesty International as "deplorable".

Theerasak Longji was executed on Monday, six years after his conviction for stabbing a 17-year-old student 24 times to steal his mobile phone and wallet.

The execution came as Thailand's coup leader-turned-premier Prayut Chan-O-Cha prepares to travel to Britain and France on a highly-publicised official visit.

The trip may now see the former army chief face awkward questions over the use of the death penalty as well as Thailand's wider human rights record since he seized power in a 2014 coup.

Prayut, however, defended capital punishment on Tuesday, telling reporters that in order to maintain peace and order in society, executions are "still a necessity and what people want".

"There are many serious cases happening today," he said.

The Department of Corrections, which oversees one of the world's highest incarceration rates, said 325 convicts have been executed since 1935, the majority by shooting.

That practice ended on December 11, 2003. Between then and 2009 a further six were executed by lethal injection.

Monday's execution serves as a "lesson to deter those who wanted to commit serious crime", the department added in a statement.

But rights groups and the United Nations hit out at the sudden resumption of the death penalty, which remains mandatory for a number of offences including aggravated murder.

"This is a deplorable violation of the right to life," Amnesty International said, accusing the kingdom of reneging on commitments to move towards abolition of the death penalty.

Thailand was "also putting itself out of step with the current global shift away from capital punishment".

Figures provided to Amnesty by the Ministry of Justice show 510 people including 94 women were on death row at the end of last year.

Nearly 200 had exhausted all final appeals -- like Theerasak. As a last resort they can seek a pardon from Thailand's king.

The death penalty is still in force in numerous countries in Asia and China remains the world's top executioner.

The International Federation of Human Rights said Thailand would have become a "de facto abolitionist" had it not carried out any executions before August 24, 2019, 10 years after the last death sentences were carried out.

About 10 protesters rallied on Tuesday afternoon outside the high-security prison in Bangkok where Theerasak was executed, holding placards that read "Execute Justice, Not People" and "Choose Humanity, Not Barbarity".

The UN Human Rights Office for Southeast Asia said it "deeply regrets" the resumption of executions.

Thailand's justice system has been criticised for favouring the wealthy and connected and is notoriously slow and harsh for poor suspects.

In 2015 two Myanmar migrant workers were sentenced to death for the 2014 murder of two British backpackers, one of whom was raped, on the dive resort island of Koh Tao after a flawed police investigation.

Their lawyer told AFP on Tuesday they were awaiting a ruling on their final appeal.