The Ministry of Public Health of Thailand, the Planned Parenthood Association of Thailand (PPAT) and Bayer Thai have joined forces to commemorate World Contraception Day 2022 at Siam Square and launch the "Breaking Myths"campaign. The campaign aims to raise awareness among teenagers of contraception.

Suwannachai Wattanayingcharoenchai, director–general of the Department of Health, Ministry of Public Health, said that unplanned pregnancies among teenagers in Thailand have been a tenacious problem. The Department of Health's latest statistics show that 57,857 teens aged 10-19 years old gave birth in 2020, an average of 159 cases per day. Among them, 4,517 girls or 7.8 percent gave birth to their second child. The Department of Health has worked with PPAT, the Royal Thai College of Obstetricians and Gynecologists and private-sector organizations in launching activities that promote knowledge on correct birth control and access to long-acting reversible contraception services The shared goal is to reduce the number of live births to mothers aged 15-19 to no more than 25 per 1,000 population in 2026. 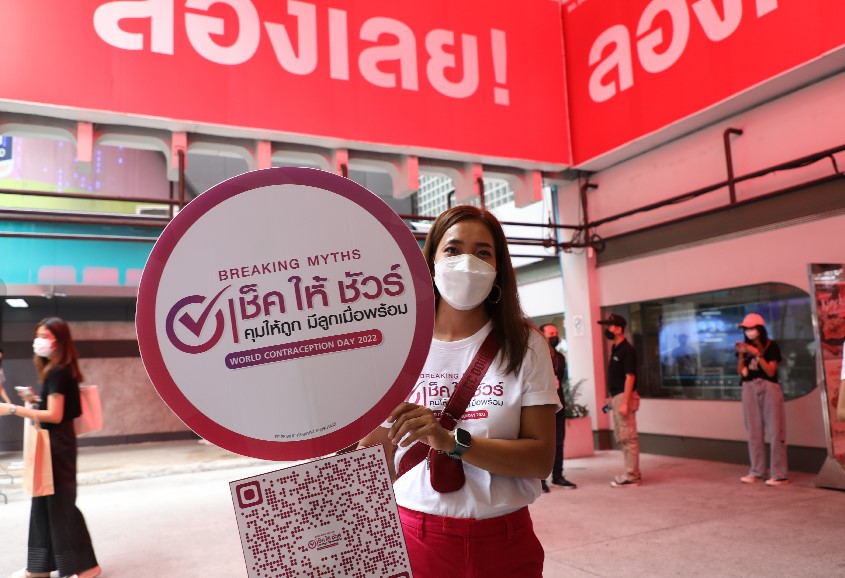 Atthaphon Kaewsamrit, deputy director–general of the Department of Health, said that tackling unintended teen pregnancies demands continual collaboration. The Department of Health and Bayer Thai have promoted health literacy and raised awareness among the general public, chiefly teenagers, on family planning. Driving this collaboration are the social consequences of unplanned teen pregnancies, involving the future of pregnant teens, family problems and the health condition of young mothers and their babies. These problems stem chiefly from ineffective birth control, caused by lack of knowledge or incorrect contraceptive application.

Luedech Girdwichai, president of PPAT, added that reproductive health issues remain in Thailand because of misperceptions on birth control among a large number of teens and people of reproductive age, circulated mainly on the Internet and social media. This leads them to unplanned pregnancies and eventually unsafe termination. For preventive purposes, PPAT has come up with a handbook of 8 birth control myths prepared by 3 obstetricians.

Paneeya Sutabutra of Bayer Thai added that unintended pregnancies have been on the rise globally due to lack of awareness on birth control, inappropriate contraceptive methods, and contraception myths like its effects on health and future pregnancy.

"The COVID-19 outbreak in the past 2 years makes it difficult for girls, particularly those from lower middle-income families, to access good healthcare or consultation on birth control, family planning or safe pregnancy. The number of unintended pregnancy cases thus remain high."

Under the "Breaking Myths"Campaign to mark World Contraception Day 2022, the Department of Health, PPAT and Bayer Thai will hold many activities to reach target groups.

They will also proceed with "Young Love,"a knowledge-sharing and consultation project on safe love for university student that was launched in 2014. This year, five Young Love roadshows at university activities are scheduled, targeted to attract 10,000 participants. The project aims to spread the right knowledge on proper birth control, in order to reduce undesirable pregnancy.

The activities to mark World Contraception Day 2022 on September 26, to be celebrated in 70 countries, are a testament to tackling unintended or undesirable teen pregnancy.