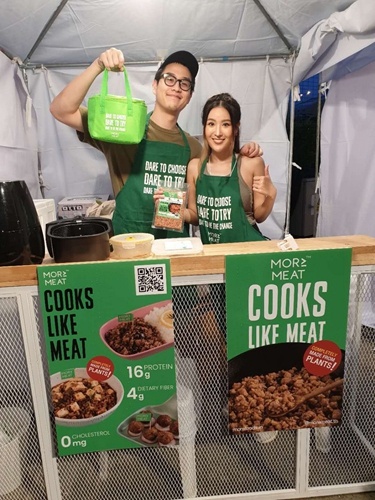 At a corner of Thailand's recent largest vegetarian festival "Root the Future," one can hear the sizzling and the crackling of burger "patties," the smoke and aroma of grilled "meat" over leaping fire, which draws one's nose to the grill.

At the other corner of the vegetarian food festival, sits another dim sum and dumpling booth, with Chinese chef dishing out steamed dumplings in front of awaiting mouth-watering customers.

"No, there is not a single product that is derived from meat," said Sasipan, a chef from "Phuture Meat," an alternative protein food company with its innovative food lab based in Malaysia.

"You see patties on the grill sizzling with reddish and pinkish liquid and you might think it is blood from meat," explained Sasipan, "actually the reddish liquid sizzling out of the patties are made from beetroot and lycopene."

As Sasipan turned over the burger "patties" one by one over the grill in high temperature, one can hear the crackling of minced fat from the "patties."

"The cracklings are not animal fat," said Sasipan, "in fact the white spots in the minced 'meat' are actually rice protein, hence the crackling noise under intense heat."

"Phuture Meat" was established in 2018 with food scientists from China, Singapore and Malaysia, finding ways to please health-conscious food consumers by getting rid of all animal products and instead gathering only nutritious products such as rice, chick pea and non-GMO soy protein, shiitake mushrooms and mung beans.

"Our main focus is purely for health and for environmental sustainability," said Ye Kai Jie, founder of "Phuture Meat," adding "our research in the food lab is to create plant-based minced 'meat' that renders no cholesterol and saturated fat."

Several food scientists, including Vorakan Tanachotevorapong from another plant-based food company "More Meat," agree that alternative protein food products are still most reliable source of food during a pandemic or in circumstances such as swine flu.

"The costs of meat fluctuate depending on the market or in a crisis such as a pandemic," said Vorakan, adding that he saw a rise in demand in "More Meat" plant-based food since April when the pandemic reached its peak in Thailand.

Vorakan said what makes an aromatic authentic Chinese plant-based dim sum or dumpling dish is its fillings, with ingredients such as split gill mushroom, carrageenan, wheat and yeast extract.

Thailand's National Food Institute under the Ministry of Industry earlier released a report indicating that more than 500 vegan items in Thailand were distributed in the past four years with a 14.5 percent increase in the number of new products each year.

The "Root the Future" vegetarian festival was launched as Thailand is celebrating the annual vegetarian season which ended on Sunday.