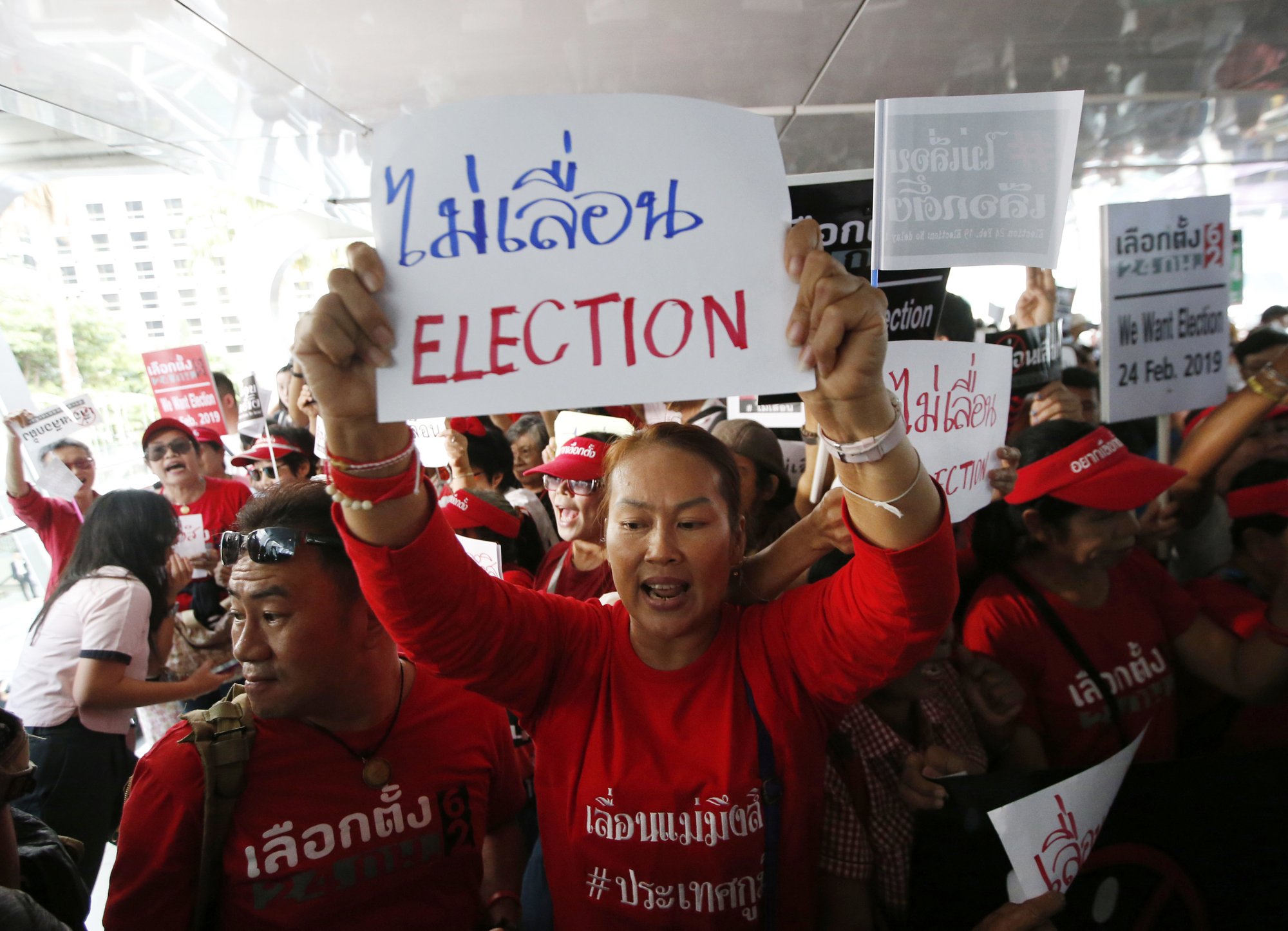 In this Tuesday, Jan. 8, 2019, file photo, demonstrators hold a rally demanding the general election not be postponed in Bangkok, Thailand. (Photo: AP)

BANGKOK, March 27 (Xinhua) -- Leaders of six out of seven parties in Thailand convened at a Bangkok hotel Wednesday to sign a joint declaration on the common resolution to set up a coalition government following Sunday's election.

Those parties claimed to have no less than 255 MP seats in their hands and to have planned to set up a coalition government of their own, though a few others might join in at a later date.

Pheu Thai (for Thais) Party, which has reportedly won 137 MP seats, is practically justified to become core of the planned coalition government endorsed by 255 MPs who will obviously make a majority in the House of Representatives which will have a total of 500 MPs, said Sudarat Keyuraphan, head of the party's strategic campaign team at a press conference.

New Economy leader Mingkhwan Saengsuwan did not show up for the joint declaration, but Phumtham maintained that the party has decided to join the Pheu Thai-led coalition.

Future Forward Party leader Thanathorn Juangroongruangkit called on the leaders of other parties who had not decided if they would join the planned coalition led by Pheu Thai Party to vote for another candidate for prime minister.

The leaders of the parties also called on Prime Minister Prayut Chan-o-cha to give up on his alleged design to head a minority coalition government with Palang Pracharath (power of people's state) Party, which has reportedly won 116 MP seats, as its core.

The Palang Pracharath Party, jointly formed by four former ministers from Prayut's cabinet, nominated Prayut as its candidate for prime minister in the general election.

The voting for the post-election prime minister in parliament needs a simple majority of a total 750 lawmakers, consisting of 500 MPs and 250 senators, in accordance with the 2017 constitution.

Meanwhile, the leaders of the six parties and other executive party members visited the Election Commission's headquarters on Wednesday and pressed for the polling agency to promptly announce unofficial results of Sunday's election in all constituencies to make it clear for all parties to see exactly how many MP seats they have made.

So far, the EC has only announced unofficial results of 95 percent of the votes from constituencies nationwide, prompting those parties to call for the polling agency to perform in an accurate, transparent and just fashion.