BANGKOK, June 18 (Xinhua) -- Thailand announced on Friday to further ease restrictions on restaurant dine-in services in the capital Bangkok and three other provinces as the government struggled to strike a balance between pandemic containment and easing economic pains from the third wave of outbreak. 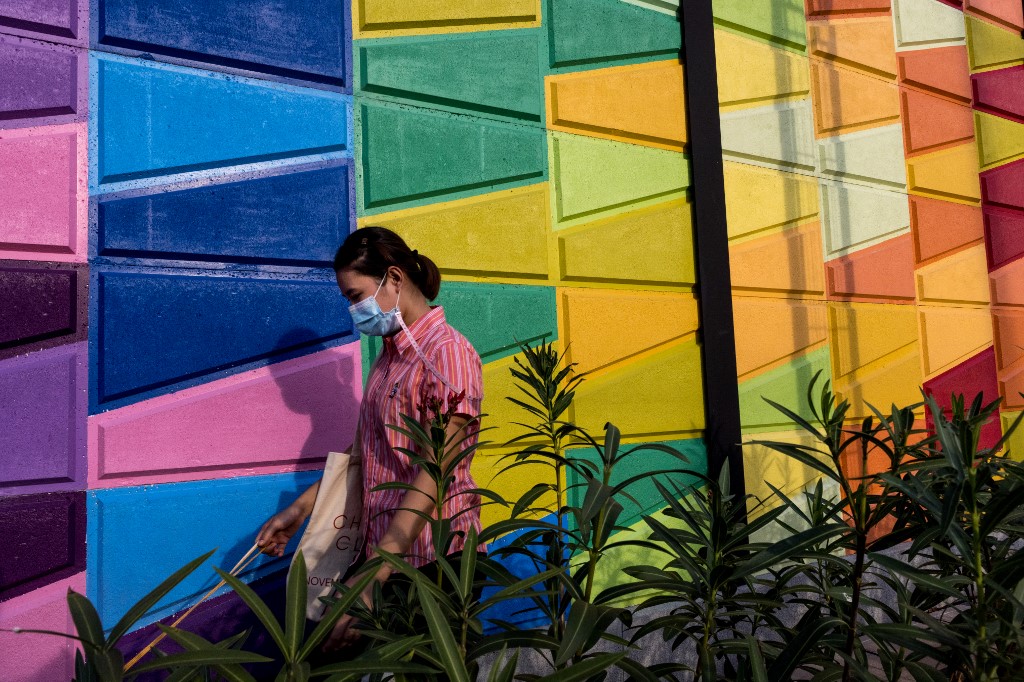 A woman wearing a face mask walks her dog past a colourful concrete wall in Bangkok on May 17, 2021. (Photo: AFP)

From Monday, restaurants in Bangkok and its neighboring Nonthaburi, Pathum Thani and Samut Prakan provinces will be given two more hours for dine-in services and can receive customers up to half of their capacity, expanding from previous 25 percent, said Taweesin Visanuyothin, spokesperson of the Center for the COVID-19 Situation Administration (CCSA).

This was in response to a letter of petition from the Thai Restaurant Association, calling for an extension to the dine-in hours for customers at restaurants in the four regions.

Bangkok and the three provinces are the epicenter of the third wave of outbreak, which has seen a sharp surge in infections since early April. The four regions remain under maximum control and restrictions, the highest among the country's four-tier category.

Restaurants in the four regions will be allowed to offer dine-in services until 11 p.m., compared with previous requirement of 9 p.m., according to Taweesin.

However, these restaurants cannot serve alcoholic beverages while bars and karaoke lounges will remain temporarily closed, he said.

The COVID-19 outbreak has cut off travel to the tourism-reliant country and shuttered commerce. To revive the economy, Thailand aimed to fully reopen to foreign visitors in 120 days and give at least one shot of vaccine to about 50 million people by October, Prime Minister Prayut Chan-o-cha said Wednesday.

On Friday, Bangkok reported 867 new cases, still topping the list of regions, according to the CCSA. The country reported 3,058 new cases during the last 24 hours, raising the total case tally to 210,782. The death toll increased by 22 to 1,577.