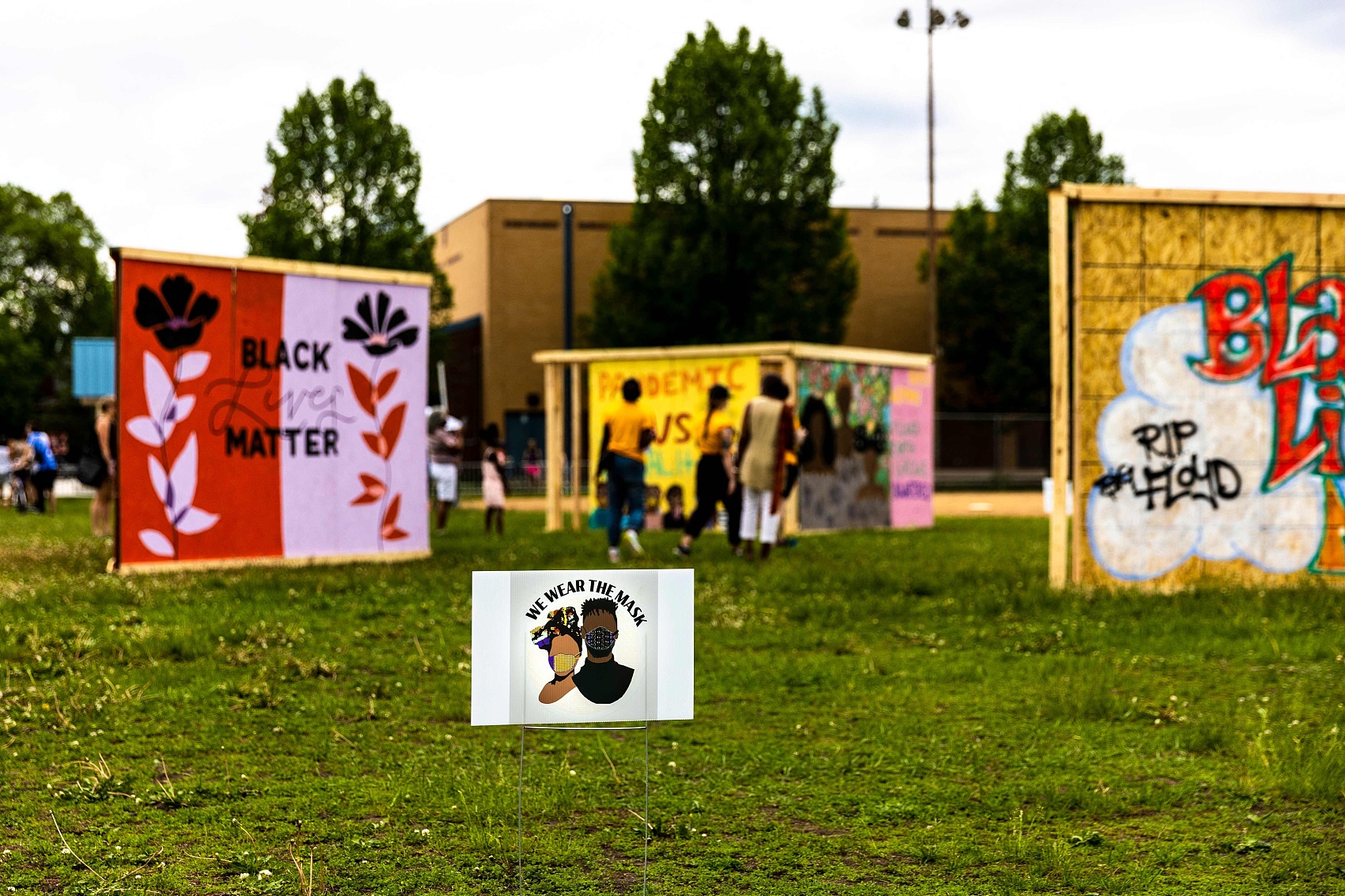 A sign regarding face masks is seen at the free public art exhibit "Justice for George: Messages from the People" at Phelps Field Park near George Floyd Memorial Square in Minneapolis, Minnesota, on May 22, 2021. (Photo: VCG)

"Day of Enlightenment." That's how the George Floyd Memorial Center wants to commemorate May 25, the anniversary of the 46-year-old Black man's death under the knee of a white police officer in Minneapolis.

"This day of brutality opened the world's eyes to the plight of Black Americans," the website of the Memorial Center says.

The aftershocks of Floyd's death are still being felt a year after his death.

On Memorial Day weekend, the police were called after Floyd bought a pack of cigarettes at Cup Foods, where Floyd was suspected of using a counterfeit $20 bill.

A struggle ensued when police tried to place him into a squad car and he ended up face down on the street with his hands cuffed behind his back.

Derek Chauvin, a 17-year veteran of the Minneapolis police department, held his knee on Floyd's neck for more than nine minutes until he passed out and died.

As Floyd complained repeatedly that he could not breathe, bystanders urged Chauvin to get off his neck.

A 17-year-old girl took a video of the arrest with her smartphone and the footage went viral. 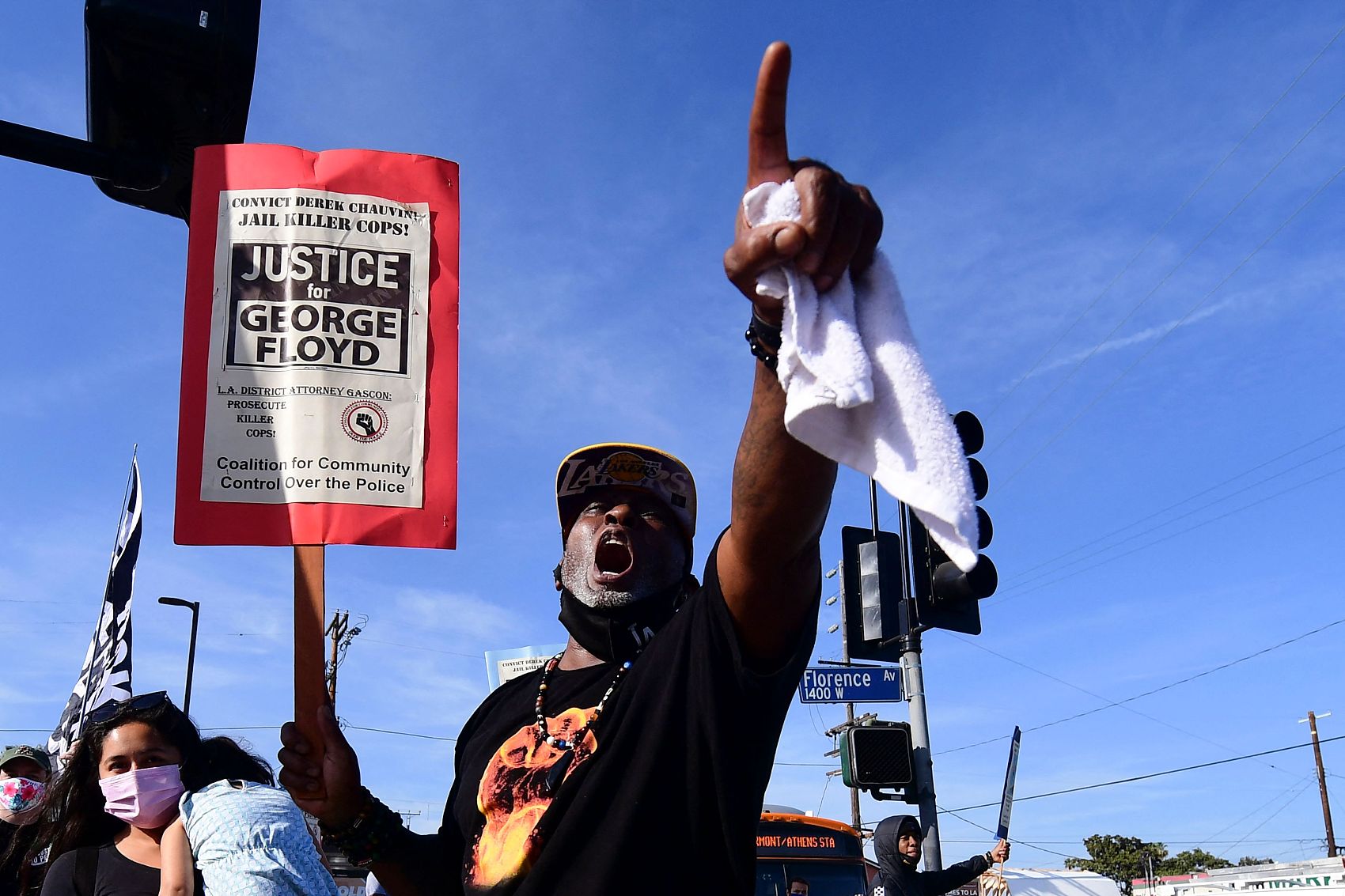 The video of Floyd's death sparked protests against racial injustice and police brutality across the United States and around the world.

Protestors -- Black and white -- took to the streets in the largest protests in the United States since the civil rights movement of the 1960s.

Most demonstrations were peaceful but some were marred by arson and looting and unrest continued in the Oregon city of Portland throughout the summer.

A police station was set on fire in Minneapolis, where National Guard troops helped restore order.

From London to Lisbon, demonstrators rallied to express solidarity with Black Americans or to denounce excesses by their own police forces.

As the Democratic presidential candidate, Joe Biden, who is the former vice president to America's first Black president, Barack Obama, and a popular figure among African Americans, reached out to Floyd's family.

Biden attended Floyd's funeral via video and pledged to dismantle "systemic racism" if elected to the White House.

His presidential rival, Donald Trump, threw his support behind the police, declaring himself the "law and order" candidate and blaming "antifa" and leftist "mobs" for the violence.

Biden won the November 4 election, receiving overwhelming support from Black voters, who he singled out for thanks in his victory speech.

"You've always had my back, and I'll have yours," Biden said.

Biden, after naming Kamala Harris, a Black woman, as his White House running mate, chose an African American to head the Pentagon in another historic first.

But Democratic attempts to pass the George Floyd Justice in Policing Act have come up short so far, blocked by Republican opposition in the Senate.

While local and state police forces in the United States have enacted some reforms of their own, the number of people who die in encounters with police remains high -- some 1,000 every 12 months.

And more than 25 percent are African Americans although they make up just 13 percent of the population.

Fewer deaths are going unnoticed, however, thanks to media interest and video, while the names of many of the victims have become well-known such as Breonna Taylor, Rayshard Brooks and Daunte Wright, to name a few.

Chauvin was fired by the Minneapolis police force and went on trial in March charged with murder and manslaughter for Floyd's death.

The livestreamed trial gripped the country and featured endless replays of the video of Floyd's fatal arrest and emotional testimony from witnesses who recounted their failed efforts to save his life.

On April 20, a jury found Chauvin guilty of all three charges and the United States breathed a collective sigh of relief.

Since then, two other police officers have been charged with murder and a third, in Alabama, convicted in the fatal shooting of a man who called police to report that he was suicidal. But prosecutions of officers remain rare.

Chauvin is to be sentenced on June 25 and three other officers charged in connection with Floyd's death are awaiting trial.