WORLD The forgotten genocide: A timeline of what Germany did in Namibia

The forgotten genocide: A timeline of what Germany did in Namibia 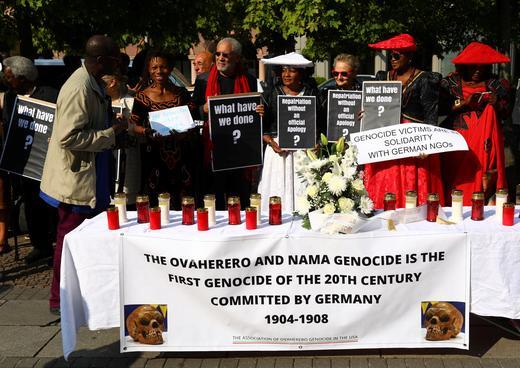 People protest outside a ceremony to hand back human remains from Germany to Namibia following the 1904-08 genocide against the Herero and Nama tribes in Namibia, in Berlin, Germany, August 29, 2018. (Photo: Agencies)

On May 28, the German government officially apologized for its role in the killing of tens of thousands of Herero and Nama tribespeople in present-day Namibia more than a century ago.

"In light of the historical and moral responsibility of Germany, we will ask Namibia and the descendants of the victims for forgiveness," German Foreign Minister Heiko Maas said in a statement that recognized the killing as genocide and offered Namibia $1.3 billion to fund development projects.

The recognition came after years of negotiations between the German and Namibian governments. According to historians, thousands of Herero and Nama people were killed between 1904 and 1908 after the tribes rebelled against German rule.

The agreement between the two governments, which came one century after the genocide took place, was rejected by descendants of the victims' community as short of "reparation." They said that their absence in the negotiations made it impossible to achieve true reconciliation.

What did Germany do in Namibia?

From 1884 to 1890, Germany ruled what was then named German South West Africa, now Namibia. The Germans instituted land grabs from the local population and deprived the location population of their livestock.

In January 1904, the Herero people rebelled against the repressive colonial German rule, and the rebellion continued until March 1907. But the resistance stood little chance against the German military and was crushed.

In an infamous decree, military commander Lieutenant-General Lothar Von Trotha, said, "Within the German borders, every Herero, with or without a gun, with or without cattle, will be shot."

Some Herero were killed with machine guns, with their wells poisoned and many Herero people fled through the Omaheke desert, a wasteland at the time. Many died of starvation and thirst.

In 1905, another uprising led by the Nama people in the south was launched against Germany. Nama people, including unarmed women and children, were sent to concentration camps, and served as slave labor. The rebellion was turned into a two-year war, and in 1907, the governor of South West Africa declared the war over, under pressure from the German population.

It was estimated that 65,000 of the 80,000 Herero, around 80 percent of the Herero population, died during the revolt. Some 10,000 of an estimated 20,000 Nama were killed in the war. The decimation of the Herero and Nama population was considered as a prelude to the Holocaust, since it bore witness to the creation of the racialist thinking that justified the genocide. 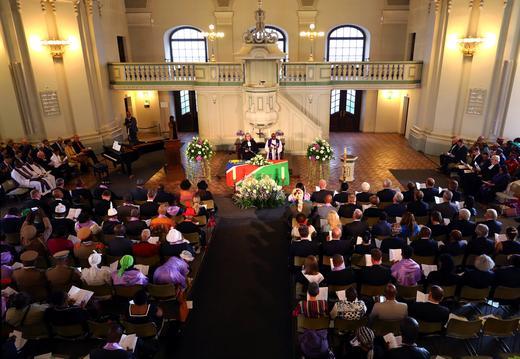 People attend a ceremony in Berlin to hand back human remains from Germany to Namibia following the 1904-1908 genocide against the Herero and Nama, August 29, 2018.

How the negotiations took place

In 1920, the German South West Africa territory was placed under South African administration and gained independence in 1990.

Since the early 2000s, a series of lawsuits were filed against the German government by representatives of the Herero and Nama people. However, domestically in Germany, there has been little remembrance of the atrocities perpetrated by the colonial power in Africa.

In 2004, Germany offered its first formal apology for the atrocities, but ruled out offering financial compensation for the victims. In 2015, Germany began formal negotiations with Namibia over the issue. As a gesture of goodwill, Germany returned the human remains of some Herero and Nama tribe members in 2018.

After five years of negotiations, German foreign minister Heiko Maas announced that the country would offer a fund of $1.3 billion to help aid community projects in Namibia. But the term "reparation" was still notably absent from the statement from Germany's foreign ministry, and has become a point of contention between the two governments.

The funds would go towards professional training and infrastructure development in Namibia.

But some Namibians criticized the plan of offering something short of reparations. The compensation failed to offer direct reparations to the survivor communities and the absence of the word "reparation" is aimed to avoid opening a legal avenue for other countries to seek reparations for atrocities Germany has committed in the past, said historians.