WORLD The Greenland story is the Trump presidency in a microcosm

The Greenland story is the Trump presidency in a microcosm

Washington (People’s Daily) - The White House on Tuesday canceled President Trump ’s planned visit to Denmark after the prime minister said she wouldn’t entertain his proposal to purchase Greenland from the Scandinavian nation.

“Denmark is a very special country with incredible people, but based on Prime Minister Mette Frederiksen ’s comments, that she would have no interest in discussing the purchase of Greenland, I will be postponing our meeting scheduled in two weeks for another time,” Trump wrote on Twitter.

Trump on Wednesday continued to criticize Denmark’s prime minister and accused her of “blowing off the US”. Speaking to reporters on the South Lawn of the White House, Mr. Trump said the remarks were inappropriate.“I thought the prime minister’s statement that it was an absurd idea was nasty,” he said, “She’s not talking to me. She’s talking to the United States of America. You don’t talk to the United States that way, at least under me.”

In tweets after leaving Washington for Kentucky on Wednesday, Mr. Trump continued to heap criticism on Denmark, saying the country didn’t spend enough on defense as part of the North Atlantic Treaty Organization. “For the record, Denmark is only at 1.35% of GDP for NATO spending. They are a wealthy country and should be at 2%,” he tweeted. A person close to the White House said the president felt Denmark was trying to embarrass him in its response to his desire to buy Greenland, and that led to his cancellation of the trip.

The episode stunned the whole world. The Denmark Prime Minister Mette Frederiksen had said a potential sale of Greenland was “an absurd discussion,” though she said a closer relationship with the US was welcome. “It is with regret and surprise that I received the news that President Trump has canceled his state visit to Denmark,” Frederiksen told reporters Wednesday. “I had been looking forward to the visit. Our preparations were well under way.”

Hours before the president said he was canceling the trip, Carla Sands, the US ambassador to Denmark, tweeted a photo of a Trump banner and wrote: “Denmark is ready for the POTUS @realDonaldTrump visit! Partner, ally, friend.”

Greenland is an autonomous Danish territory. While Greenland’s government controls most domestic matters, foreign and security policy is handled by Copenhagen. “Strategically, for the United States, it would be nice,” Mr. Trump told reporters on Sunday. “Essentially, it’s a large real-estate deal.” 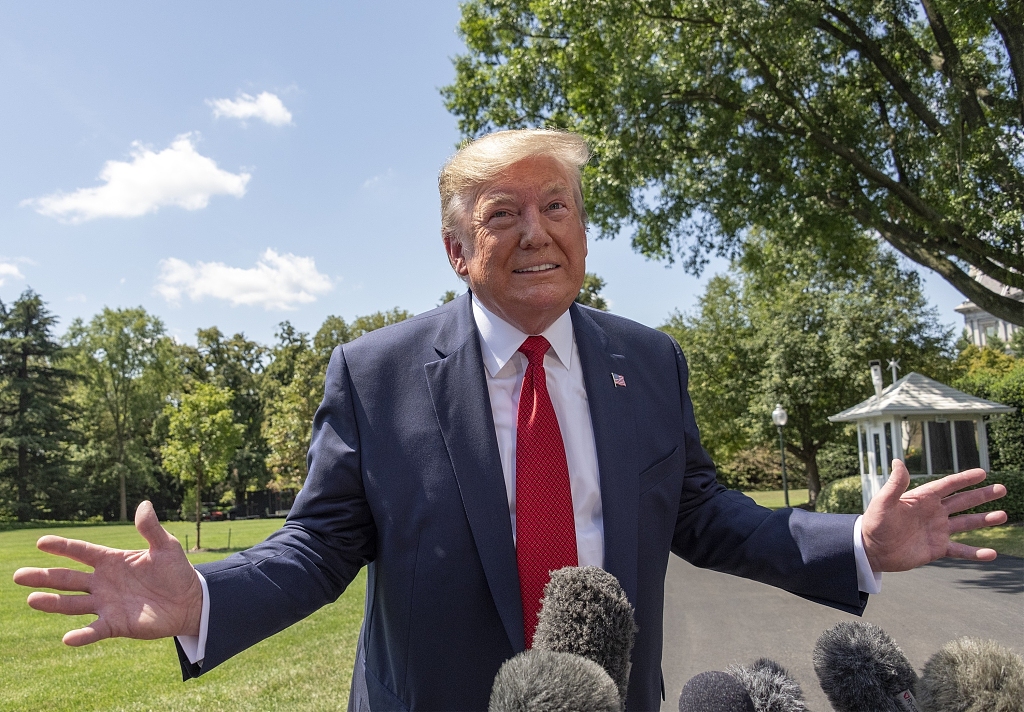 President Donald Trump calls on a reporter as he takes questions as he prepares to depart the South Lawn of the White House in Washington, DC to participate in events in Louisville, Kentucky on Wednesday, August 21, 2019. (Photo: VCG)

The New-York Times reports that some former Trump administration officials in recent days said they were increasingly worried about the president’s behavior, suggesting it stems from rising pressure on Trump as the economy seems more worrisome and next year’s election approaches. After casting off advisers who displeased him at a record rate in his first two and a half years in office, Mr. Trump now has fewer aides around him willing or able to challenge him, much less restrain his more impulsive instincts. With a growing schedule of campaign rallies, he will be talking in public even more in the coming months, each time a chance to say something provocative that may distract from the messages his staff would prefer to emphasize.

As CNN commented, the Greenland story really does have it all. It is the Trump presidency in microcosm. He says and does absolutely wild things. Even his top staffers aren't sure how serious he is, and therefore don't know whether to actually pursue it. “Greenland was never for sale. Mexico was never going to pay for the wall. His inauguration crowd was never the largest in history. There was not blame on both sides in the white supremacist riots in Charlottesville. Immigrants were never invading our country in hordes. Background checks were never going to happen. You get the idea. It's the Trump presidency.”