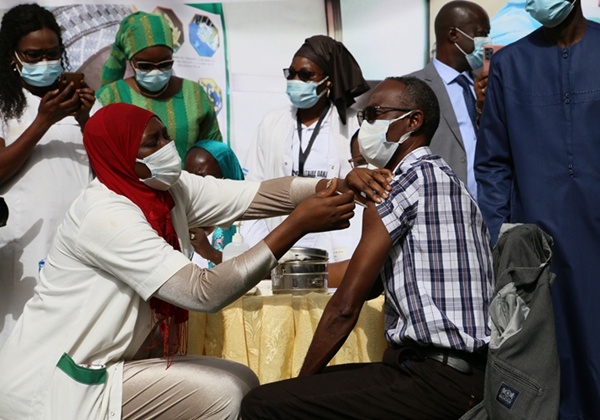 On February 17, Senegal received 200,000 vaccines from the Chinese company Sinopharm. The vaccine offered a breath of relief to a country severely hit by the COVID-19 pandemic. Senegalese President Macky Sall personally traveled to the Blaise Diagne International Airport in Diass to receive the doses. He was accompanied by Minister of Health and Social Action Abdoulaye Diouf Sarr and other Senegalese health ministry officials. Chinese Ambassador to Senegal Xiao Han and World Health Organization representatives were also present.

Sall expressed his gratitude to the Chinese government for having facilitated the acquisition of the doses. Among other things, he thanked the Chinese Embassy in Senegal for its "follow-up on this complex operation." He also said that the vaccines had been acquired from the state's budget.

In an op-ed published in the national daily Le Soleil 48 hours after the delivery of the Chinese vaccines, Xiao affirmed that China would continue to help Dakar in its efforts to stabilize the economy, promote employment and safeguard the welfare of the people. The diplomat added that China would continue to accompany Senegal in its accelerated march toward emerging country status. He added that although this batch of vaccines did not suffice to meet Senegalese needs, it would still have a significant impact and provide timely protection to health workers and populations affected by the health crisis. He also stressed that Senegal and China would strengthen their vaccine cooperation, adding that his country would mobilize more international resources for Senegal and Africa to save precious lives.

The Sinopharm vaccine has already been used in several African countries, including Seychelles, Zimbabwe and Egypt. Sall promised a quick start to immunization with his appeal to all people to fully embrace the government's strategy. In justifying the choice of the Chinese vaccine, El Hadji Mamadou Ndiaye, Director of Prevention at the Ministry of Health and Social Action, cited its greater convenience. Initially, the vaccination campaign targeted some 20,000 health personnel, as well as people over 60 with comorbid conditions, or about 3 percent of Senegal's more than 16 million people. They were followed by people with chronic diseases (3 percent of the population) and people over 60 years old without comorbidity (17 percent). The campaign started on February 23 and Sarr was the first Senegalese to be vaccinated.

Senegal is the seventh African country to launch mass vaccination. The minister said, "This February 23 is a historic day," adding, "It is appropriate to thank H.E. President Macky Sall, whose ambition for our country allowed us to acquire 200,000 doses of Sinopharm vaccines." According to the criteria mentioned above, all 14 administrative regions of Senegal have received doses and have started the vaccination campaign. For the first phase, the Senegalese authorities intend to vaccinate 20 percent of the population or 3.5 million Senegalese. It should be noted that Senegal has offered the sister republics of Gambia and Guinea Bissau 10 percent of the 200,000 doses received from China, i.e., 10,000 doses, to each of these two countries.

Senegal is expected to eventually acquire 6.8 million doses. In addition to these 200,000 doses of the Chinese vaccine, other vaccines will be added. According to Annette Seck Ndiaye, Director General of the National Procurement Agency, discussions are underway to acquire the Sputnik V vaccine as well. "As in many countries, we will use several vaccines," said Ndiaye.

On March 3, Senegal also received the first batch of 324,000 COVAX vaccine doses from Oxford/AstraZeneca. According to the health authorities, nearly 1 million additional doses are already planned for the second quarter of 2021, and more will follow throughout the year. In the same vein, Irene Mingasson, European Union Ambassador to Senegal, recently stated that 8 million doses were destined for Senegal under the COVAX initiative.

According to Professor Moussa Seydi, Head of Infectious Diseases at the Fann University Hospital Center in Dakar, the Sinopharm vaccine is 79 percent effective on symptomatic cases. Data published in a major scientific journal show that 28 days after the second vaccine dose, 100 percent of the people who participated in the study had a protective neutralizing antibody level. He added that the vaccine was 100 percent effective against the severe forms of the disease that have caused so many deaths and that it was urgent to stop the fatalities.

At the beginning of March, Senegal made its annual assessment of the fight against COVID-19. As of March 1, one year after the first case appeared, the country had recorded 34,732 patients, of which 29,161 had been cured, 880 had died, and 4,691 were still being monitored in health facilities and at home.

For Seydi, vaccines will undoubtedly reduce the rate of contamination and ultimately contain the pandemic. In presenting the epidemiological bulletin of March 1, Ndiaye revealed that 27,018 people had been vaccinated in Senegal one week after the launch of the vaccination campaign for the priority groups.

To reach as many people as possible, the Ministry of Health and Social Action has launched an electronic platform to carry out a census of all people who wish to be vaccinated. The objective is to be able to define the number of vaccines needed on the territory, to classify people wanting to be vaccinated by priority groups as stated by the government, to inform citizens about the vaccination campaign and to allow those who do not have access to vaccination for logistical or other reasons to rely on health services to facilitate this vaccination.