WORLD The last dance: Europe tells May to 'get down to business'

The last dance: Europe tells May to 'get down to business' 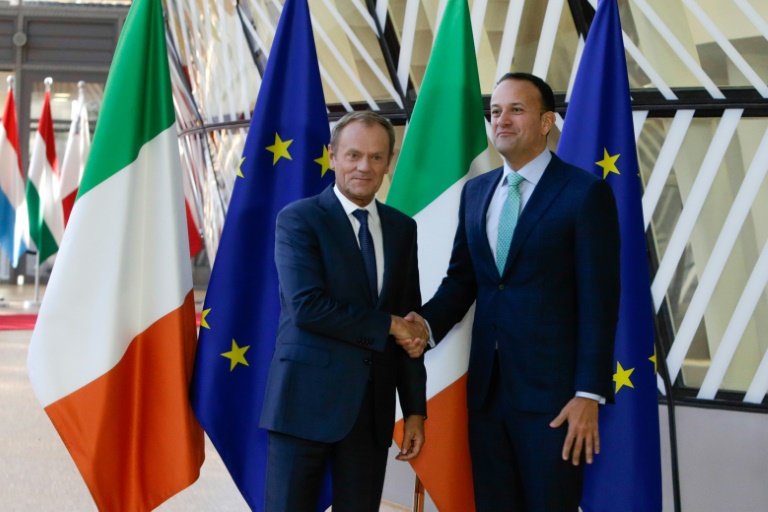 The jig's up. It's time for Theresa May to stop dancing around and get down to the business of negotiating Brexit, Europe warned on Thursday.

Impatient EU leaders had grudgingly allowed time for the British prime minister to win over her own Conservative Party conference this week.

But, with just two weeks to go until a crunch October 17 meeting on Britain's Brexit divorce deal, patience is running out.

In Britain, May's Tory conference may be best remembered for her dance moves at the podium, but Brussels is still outraged that her foreign minister compared the EU club to the Soviet gulag.

And EU President Donald Tusk, who met Ireland's Prime Minister Leo Varadkar in Brussels on Thursday, was in a stern mood as he reminded May that the clock is ticking.

"I was a party leader myself for 15 years and I know what the rules of party politics are, but now that the Tory party conference is over we should get down to business," Tusk declared.

Speaking alongside Varadkar, who echoed the need for more intense negotiations in the run up to an October 18 European summit, Tusk criticised the British Tories' conference rhetoric.

"Unacceptable remarks that raise the temperature will achieve nothing except wasting more time. What needs to be done is maximum progress by the October European Council," he declared.

Tusk's office has invited May to address the other 27 EU leaders on October 17, the eve of the summit that he has previously described as the "moment of truth" for Brexit negotiations.

If May accepts the invitation, she will have a chance to convince her peers that a breakthrough is possible and a Brexit deal can be finalised before Britain leaves the bloc at the end of March.

Some diplomats in Brussels have suggested the leaders could then talk through the night and approve the outlines of an agreement while they are still in Brussels for the broader October 18 talks.

"May is as stubborn as a mule," a French diplomatic source said, casting doubt on whether the British premier could even muster a parliamentary majority to approve any eventual deal.

European officials had been hoping the Tory conference would give May enough of a political bounce to give her room to make the concessions they see as necessary for a deal.

At the conference, May called Brexit a "moment of opportunity" but was forced to urge supporters to get behind her as she heads into what would be the "toughest phase" of negotiations.

She may have survived, but in the eyes of many in European capitals May only managed to do so because her party rivals like former foreign secretary Boris Johnson held back.

"She won't fall because no-one wants her job," the French official said. "Johnson wants to take over afterwards when there's nothing left to do. He's never liked to work."

Other European officials now expect any deal will have to wait for an extraordinary summit in November. Either way, the two sides will have to resolve the issue of the post-Brexit Irish border.

"I'm very keen to see an agreement concluded by November if at all possible," Varadkar said. "I think that's in the interests of Ireland, the EU and the UK. So let's get down to business."

Brussels insists the Brexit divorce must include a legally-binding "backstop" to prohibit a restored "hard border" between the British province of Northern Ireland and the Irish Republic, an EU member.

May warns she will never accept a deal which infringes on British sovereignty and is calling for a transitional form of common market for goods between the EU and all of the United Kingdom.

European leaders in turn warn this would undermine the integrity of their own single market, leaving the talks at a dangerous impasse.

If, by March, there is no divorce deal and no agreed plan for negotiating a new post-Brexit relationship the disruption to the European and British economy could be devastating.

"Today, after my long discussion with my guest, the (Irish) Taoiseach, I want to say that the EU is united behind Ireland and the need to preserve the Northern Ireland peace process," Tusk said.