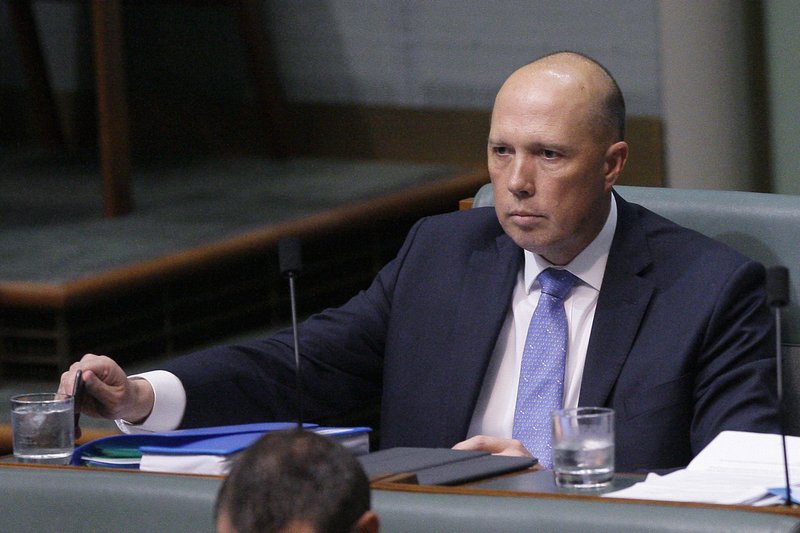 Australian former Home Affairs Minister Peter Dutton sits in the back left seat in Parliament in Canberra, Australia, Wednesday, Aug. 22, 2018. Dutton moved from the front row where Cabinet ministers sit to the back row after his bid to become prime minister failed on Tuesday. (Photos: AP)

Prime Minister Malcolm Turnbull says he plans to hold a party meeting on Friday if a majority of his ruling conservative Liberal Party lawmakers want it.

If that meeting calls for a leadership ballot, he will quit Parliament.

That would create a by-election that could cost the government its single-seat majority or spur his replacement to immediately call a general election.

The Australian government has shut down Parliament early while lawmakers in the ruling conservative Liberal Party grapple with their leadership crisis.

Furious opposition lawmakers argued against the motion to adjourn the House of Representatives until Sept. 10.

Opposition lawmaker Tony Burke argued that the government wanted to avoid question time, a daily period when the prime minister and ministers answer opposition questions for more than an hour.

The government does not have a majority in the Senate, which has not been shut down. 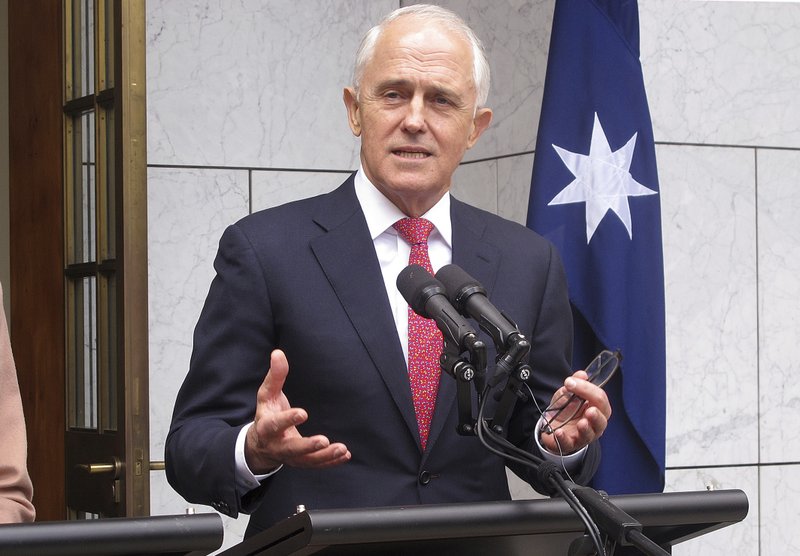 Australian Prime Minister Malcolm Turnbull address reporters at Parliament House in Canberra, Australia, Tuesday, Aug. 21, 2018. Turnbull called on his government to unite behind him after he survived a leadership challenge, defeating a senior minister in an internal ballot that is unlikely to settle questions of his support.

Australia’s opposition has narrowly lost a vote in Parliament that would have sent the potential next prime minister to court to determine whether he is eligible to be a lawmaker.

The vote to refer Peter Dutton to the High Court was defeated 69 votes to 68 in the House of Representative hours before he wants to challenge Prime Minister Malcolm Turnbull for his job in a ballot of party colleagues.

Dutton has released legal advice that his family’s ownership of two child-care centers that received federal funding does not breach a constitutional ban on lawmakers having a pecuniary interest in an agreement with the public service. Some constitutional lawyers say there are areas of doubt.

Such a pending court case could scare lawmakers away from supporting Dutton in a leadership ballot. Government lawyers are investigating the case.

Three senior Cabinet ministers have told Australia’s prime minister that he has lost his government’s support and must quickly hold an internal ballot to elect a new leader.

Mathias Cormann, Michaelia Cash and Mitch Fifield made their positions public on Thursday in a major blow to Prime Minister Malcolm Turnbull’s chances of surviving his current political crisis.

Former minister Peter Dutton has told Turnbull that he wants lawmakers in the ruling conservative Liberal Party to elect a new prime minister on Thursday.

In a surprise vote of ruling lawmakers Tuesday, Turnbull defeated Dutton in such a ballot by 48 votes to 35.

Australia has had years of political instability since Prime Minister John Howard lost power in 2007 after more than 11 years in office. No prime minister has lasted a full three-year term since.

A government lawmaker has called on Australia’s prime minister to give him a second chance to replace the premier in a leadership vote.

Peter Dutton said he told Prime Minister Malcolm Turnbull on Thursday that he no longer had the support of a majority of lawmakers in the ruling conservative Liberal Party.

In a surprise vote of ruling lawmakers Tuesday, Turnbull defeated Dutton by 48 votes to 35.

Dutton wants the new vote on Thursday before Parliament takes a two-week break. The next scheduled party meeting is Sept. 11.

Turnbull did not immediately make a public response.

Australia has had years of political instability since Prime Minister John Howard lost power in 2007 after more than 11 years in office. No prime minister has lasted a full three-year term since.