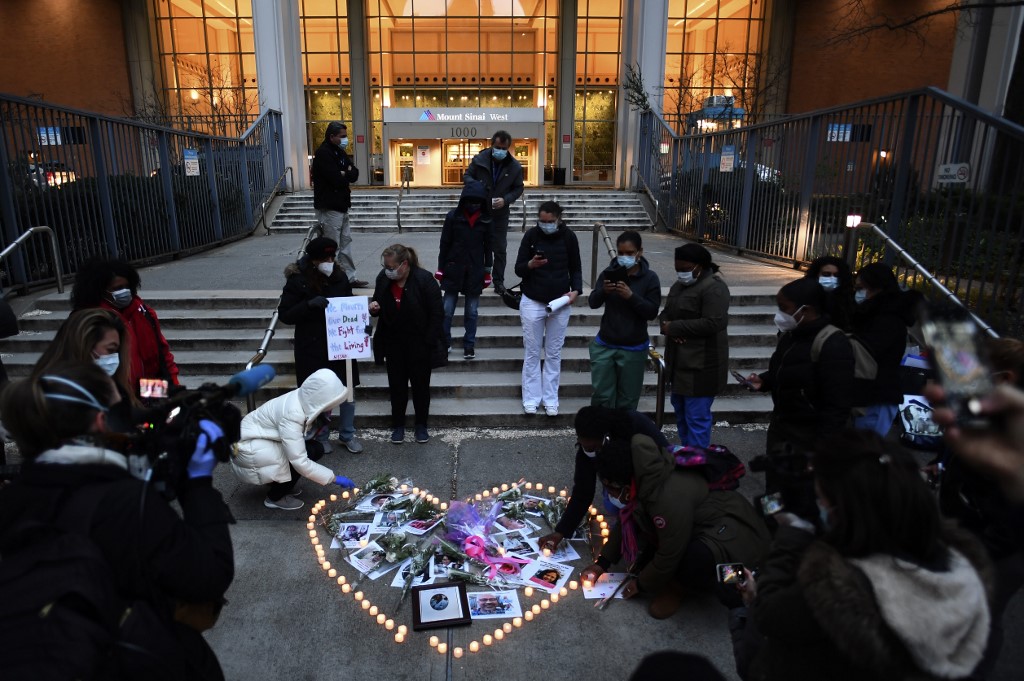 Nurses and healthcare workers light candles as they mourn and remember their colleagues who died during the outbreak of the novel coronavirus (which causes COVID-19) during a demonstration outside Mount Sinai Hospital in Manhattan on April 10, 2020 in New York City. (Photo: AFP)

A total of 2,000,984 confirmed cases of COVID-19 were reported as of Tuesday, according to the World Health Organization (WHO).

“The overall world outbreak, 90 percent of cases are coming from Europe and the United States of America. So we are certainly not seeing the peak yet,”  said Dr. Margaret Harries, a spokeswoman of the WHO, at a briefing on Tuesday. The United States reported 609,516 confirmed cases of COVID-19 as of 18 pm BJT on Wednesday, becoming the hardest-hit country by the virus, according to the data compiled by Johns Hopkins University. The outbreak has claimed the lives of at least 26,056 people in the US, the most of any country.

Italy, which recorded its first coronavirus death at the end of February, reported 162,488 infections and 21,067 fatalities.

Germany has confirmed a total of 132,210 coronavirus cases.

The total death toll from the COVID-19 in France has reached 15,729, with 131,362 confirmed cases, according to the Johns Hopkins University tally.

Turkey's total confirmed cases climbed to 65,111, with the death toll from the virus reaching 1,403.

Belgium has recorded a total of 31,119 confirmed cases of coronavirus, according to the Johns Hopkins University.

The number of infections in the Netherlands has increased to 27,580, with 2,955 deaths, Johns Hopkins reported.