A total of 2,069,819 confirmed cases of COVID-19 were reported as of Thursday, according to the World Health Organization (WHO).

US President Donald Trump's move to halt funding to the WHO over its handling of the pandemic prompted condemnation on Wednesday from world leaders, as recorded global infections passed the 2 million mark. 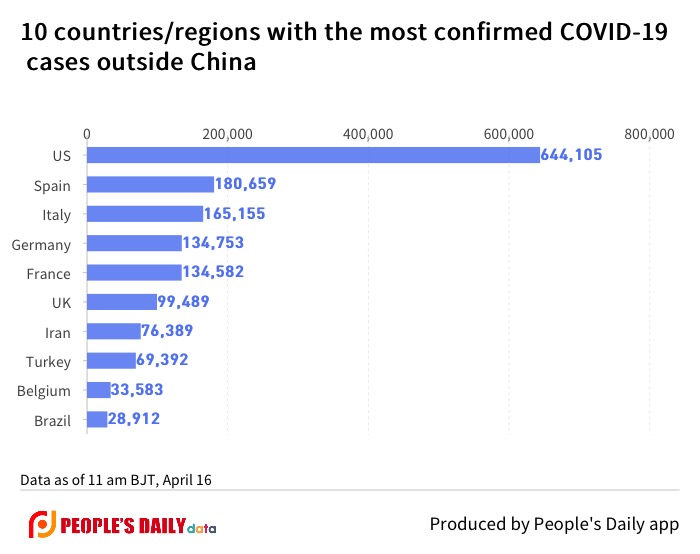 The United States reported 645,361 confirmed cases and 28,638 deaths from COVID-19 as of 5pm BJT on Thursday, according to the 1Point3Acres coronavirus tracker.

The country on Wednesday posted nearly 2,600 new deaths from COVID-19, the heaviest daily toll of any country, Johns Hopkins University said. The figures came after President Donald Trump earlier in the evening said, "The data suggests that nationwide we have passed the peak on new cases." He will announce on Thursday the first plans for lifting coronavirus lockdowns.

Italy, which recorded its first coronavirus death at the end of February, reported 165,155 infections and 21,645 fatalities.

Germany has confirmed a total of 134,753 coronavirus cases.

France has a total of 134,582 that contracted the COVID-19, with the number of deaths at 17,167, according to the Johns Hopkins University tally.

Turkey's total confirmed cases climbed to 69,392, with the death toll from the virus reaching 1,518.

Belgium has recorded a total of 33,573 confirmed cases of coronavirus, according to the Johns Hopkins University.

The number of infections in Brazil has increased to 28,912, with 1,760 deaths, Johns Hopkins reported.