One of the nearly 1,800 digital billboards and screens across all five boroughs are displaying messages of public safety, gratitude, pride, and solidarity with essential workers as seen in Times Square April 19, 2020 in New York. (Photo: AFP) 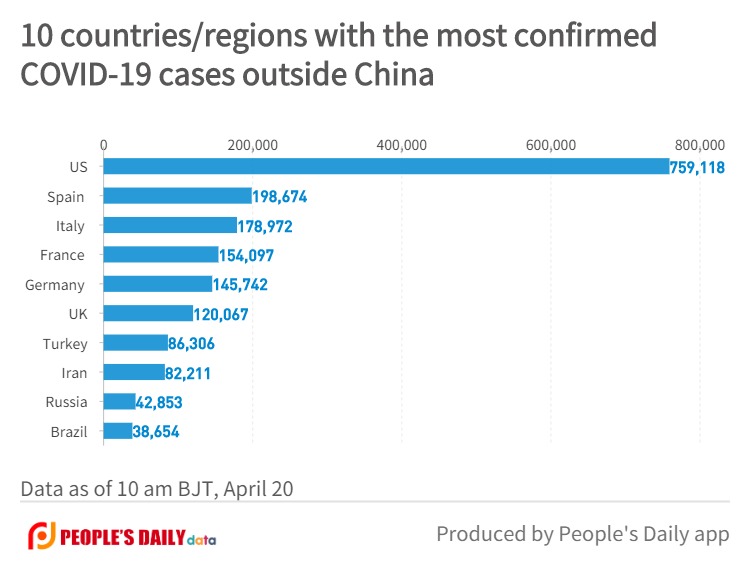 The outbreak has now claimed the lives of at least 40,665 people in the US, the most of any country. The US also leads the world in the number of confirmed infections with 759,118, according to a tally by Johns Hopkins University as of 8:38 am BJT on Monday.

Spain is the next most-affected country with 198,674 confirmed infections and 20,453 fatalities, according to Johns Hopkins.

Turkey on Sunday announced 127 new deaths from the novel coronavirus, raising the official death toll to 2,017. Health Minister Fahrettin Koca tweeted an image showing there were 3,977 new cases of COVID-19 infection in the past 24 hours, bringing total reported infections to 86,306.

Iran on Sunday announced 87 new deaths from the novel coronavirus in the past 24 hours, raising the official toll to 5,118, as it takes steps to reopen the economy. Health ministry spokesman Kianoush Jahanpour said 1,343 new infections had been confirmed, taking the total to 82,211.

Russia has registered a new daily record of 6,060 COVID-19 cases over the last 24 hours, raising the total number to 42,853 as of Sunday, official data showed. The death toll climbed to 361 from 313 the previous day, while 3,291 people have recovered, including 234 in the past 24 hours, Russia's coronavirus response center said in a statement.