Cuban Alejandro Lopez trains martial arts on the roof of his home in Havana on April 7, 2020. (Photo; AFP) 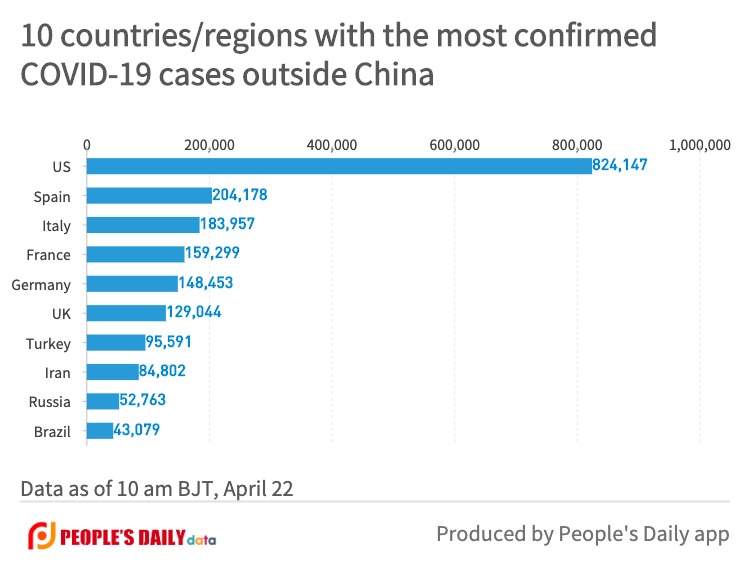 The outbreak has now claimed the lives of at least 44,999 people in the US, the most of any country. The US also leads the world in the number of confirmed infections with 824,147, according to a tally by Johns Hopkins University as of 8:38 am BJT on Wednesday.

The Spanish Ministry of Health, Consumer Affairs and Social Services on Tuesday confirmed that 21,282 people have died in Spain because of COVID-19. A total of 3,968 new cases were also confirmed on Tuesday, bringing the tally of infections to 204,178.

The coronavirus pandemic has claimed 24,648 lives in locked-down Italy, bringing the total number of infections, fatalities and recoveries so far to 183,957, according to the latest data released by the country's Civil Protection Department on Tuesday.

Hospitals and nursing homes numbers showed that combined deaths caused by the COVID-19 in France rose to 20,796, up from Monday's 20,265, Director-General of Health Jerome Salomon told a daily briefing on the epidemic. Confirmed cases in France increased to 159,299, Johns Hopkins reported.

The total number of COVID-19 cases in Turkey increased to 95,591 while the death toll surged to 2,259, Turkish Health Minister Fahrettin Koca tweeted.

Iranian health ministry on Tuesday reported 88 new COVID-19 death cases in the past 24 hours to a total of 5,297 deaths in the country, official IRNA news agency reported. Also, 1,297 new infection cases were registered overnight, bringing the total number to 84,802 in the country, said Kianush Jahanpur, head of Public Relations and Information Center of the Ministry of Health and Medical Education.

Russia has registered a total of 52,763 COVID-19 confirmed cases and 456 deaths, according to the Johns Hopkins University.

Confirmed cases of COVID-19 in Brazil increased to 43,079 with 2,741 deaths, Johns Hopkins reported.