A woman wears a painted protective facemask at the Syntagma square, in central Athens, on May 7 (Photo: AFP) 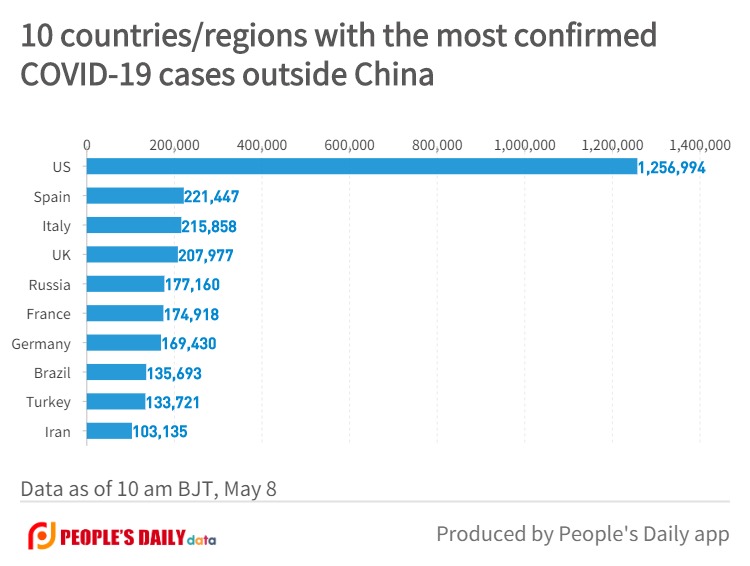 The outbreak has now claimed the lives of at least 75,661 people in the US, the most of any country. The US also leads the world in the number of confirmed infections with 1,256,994, according to a tally by Johns Hopkins University as of 9:32 am BJT on Friday.

The Ministry of Health, Consumer Affairs and Social Services said Thursday that the caseload in Spain has reached 221,447, with 754 new infections reported in a 24-hour period, and that the death toll had reached 26,070.

The coronavirus pandemic has claimed 274 more lives in Italy in the past 24 hours, bringing the nationwide toll to 29,958, according to the latest data released by the country's Civil Protection Department on Thursday. There were 1,401 new infections over the past 24 hours, bringing the total number of infections, fatalities and recoveries to 215,858 since the pandemic began in Italy on Feb. 21.

Another 539 COVID-19 patients have died in the UK, bringing the total coronavirus-related death toll in the country to 30,615, Foreign Secretary Dominic Raab said Thursday. The number of confirmed cases rose to 207,977, according to Johns Hopkins University.

Russia has reported a new daily record of 11,231 new confirmed cases of COVID-19 over the past 24 hours, taking the total to 177,160 as of Thursday, the country's coronavirus response center said in a statement. The death toll from the pandemic increased by 88 to 1,625, the statement said.

France on Thursday registered 178 new deaths from the novel coronavirus, taking the tally to 25,987, while new hospital admissions continued to slow as the government plans to ease anti-coronavirus lockdown on May 11, according to its Health Ministry. The number of confirmed cases rose to 174,918, according to Johns Hopkins University.

Turkey on Thursday reported 1,977 confirmed cases of COVID-19, bringing the total number of infections in the country to 133,721. The death toll from the virus in Turkey reached 3,641 after 57 more people lost their lives in the last 24 hours, Turkish Health Minister Fahrettin Koca tweeted.

The Iranian Health Ministry on Thursday confirmed 1,485 new COVID-19 cases, bringing the total number of cases in the country to 103,135, state-run IRNA news agency reported. Over the past 24 hours, 68 patients were confirmed dead from the virus, raising the death toll to 6,486, said Kianush Jahanpur, head of Public Relations and Information Center of the Ministry of Health and Medical Education.