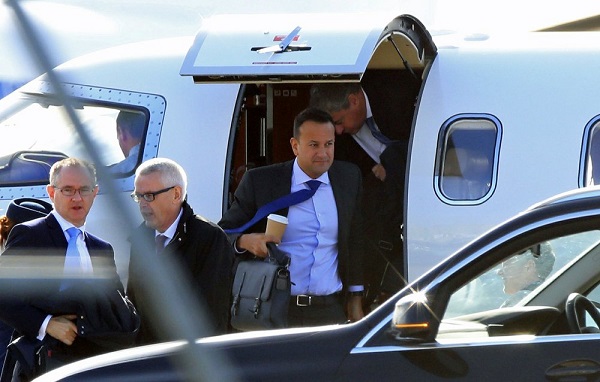 BRUSSELS - The Latest on Britain's departure from the European Union (all times local):

Barnier was to brief EU ambassadors and key legislators later Friday, amid a sense that there remains a glimmer of hope to get an amicable divorce deal with Britain. The deadline is Oct. 31 but there could also be an extension.

Three years since the U.K. voted to leave the EU, Barnier has learned to keep his cards close to his chest.

"Brexit is like climbing a mountain. We need vigilance, determination and patience," said the man who once organized the 1992 Winter Olympics in his region of France.

The pound has surged to its highest level in nearly a month as hopes rise of a Brexit deal between Britain and the European Union.

By mid-morning on Friday, the currency was up 0.8% on the day to $1.2537. The advance follow's one of the sharpest one-day rises this year on Thursday after British Prime Minister Boris Johnson and his Irish counterpart, Leo Varadkar, indicated there was a "pathway" to a Brexit deal.

Johnson has insisted that Britain will leave the EU at the end of the month on the scheduled Brexit date of Oct. 31 regardless of whether there is a deal or not. Fears that the country would crash out of the EU without a deal has weighed heavily on the pound in recent weeks.

Neil Wilson, chief market analyst at Markets.com, urged caution, saying the rally "looks very exposed to any negative — that is, realistic — news on Brexit in the next few days."

European Union Council chief Donald Tusk says that he has "received promising signals" from Irish Prime Minister Leo Varadkar that a Brexit deal is still possible and he has extended a deadline to continue talks with the United Kingdom.

Tusk, speaking in Nicosia, said "for the first time" Varadkar and British Prime Minister Boris Johnson saw a pathway toward a divorce deal for Britain's departure from the European Union. He said that "even the slightest chance must be used" to get a deal.

Originally, Tusk said he was planning to pull the plug on talks Friday, but because of the breakthrough he can now see talks going through the weekend. The EU has a two-day summit starting next Thursday.

Tusk said "there is no guarantee of success and the time is practically up" but insisted both sides should use every opportunity available ahead of Britain's scheduled Oct. 31 departure date.

France says a chaotic no-deal Brexit remains the most likely outcome despite the positive vibes emanating from a meeting Thursday of British Prime Minister Boris Johnson and his Irish counterpart Leo Varadkar.

De Montchalin said in an interview with France Inter radio that even Britain's scheduled departure date of Oct. 31 remains realistic since she does not see an obvious reason to grant a further extension to the U.K.

"I have a fundamental question: why give more time. If it is time for the sake of time? It has taken one year, even three years, and we don't really get it," she said.

The European Union and the United Kingdom are entering into fresh talks after a meeting between British Prime Minister Boris Johnson and Irish Prime Minister Leo Varadkar raised hopes a Brexit breakthrough might be looming.

Johnson's Brexit envoy, Stephen Barclay, drove into EU headquarters for a Friday breakfast meeting with Michel Barnier at which he is expected to brief the EU negotiator on what, if any, fundamental breakthrough has been made.

Johnson said that there was a "pathway" to a belated deal to stave off a chaotic and costly no-deal Brexit on Oct. 31, while Varadkar said the meeting was "very positive."

The main stumbling block remains how the U.K.'s only land border, between Britain and Ireland, is dealt with.