A lady walks under a pier while the surf rises Wednesday, Sept. 12, 2018, in Kill Devil Hills, N.C., as Hurricane Florence approaches the east coast. (Photos: AP)

Hurricane Florence has been downgraded to a Category 2 storm but it is still considered an extremely dangerous and life-threatening storm.

But the National Hurricane Center said Wednesday evening that the storm is expected to bring life-threatening storm surge and rainfall to the Carolinas as it approaches the coast Thursday and Friday. 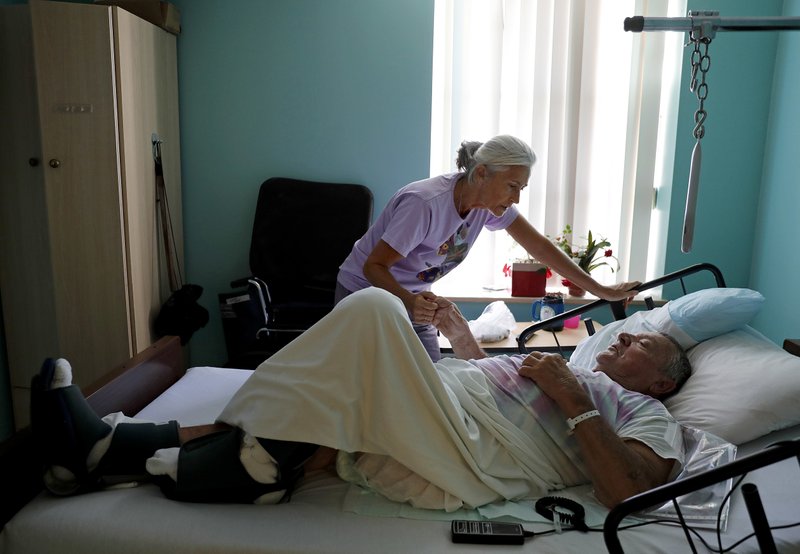 Marge Brown, 65, says goodbye to her father, George Brown, 90, before he is evacuated from a healthcare home in Morehead City, N.C., Wednesday, Sept. 12, 2018, as Hurricane Florence approaches the east coast. “I’d like to stay and see what happens. I’m 90 plus,” said Brown, a WWII veteran who says he’s survived a plane crash and severe burns from a laboratory fire where he once worked.

Vice President Mike Pence has canceled his planned trip to Georgia on Thursday because of the updated track of Hurricane Florence.

The vice president’s office says Pence will remain in Washington to monitor the federal response to the hurricane.

Pence had been scheduled to hold a campaign event for Georgia gubernatorial candidate Brian Kemp and stop by an American Red Cross disaster field supply center in Atlanta and address employees at the Delta TechOps facility.

President Donald Trump has canceled campaign events in Missouri and Mississippi this week because of the impending hurricane. 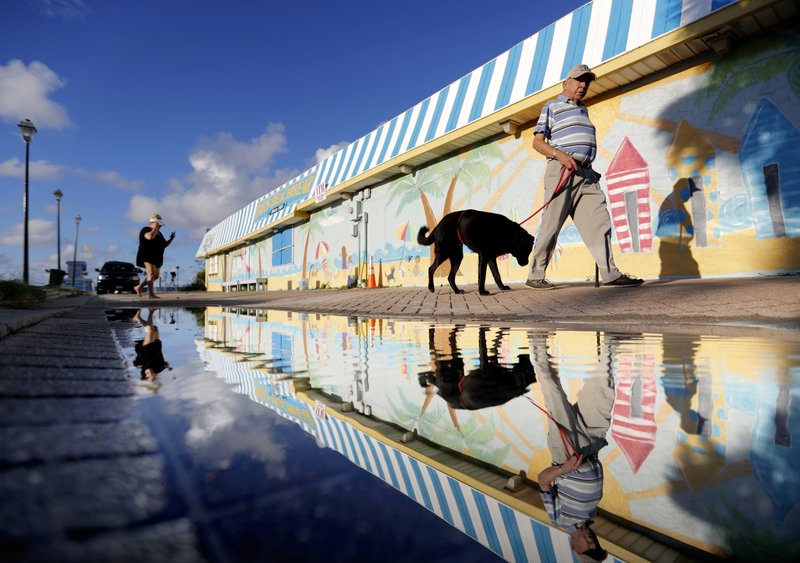 Beachgoers walk past a mural along the boardwalk as Hurricane Florence approaches the east coast in Atlantic Beach, N.C., Wednesday, Sept. 12, 2018.

A South Carolina city in the projected path of Hurricane Florence has put a curfew into place for residents who remain.

The Myrtle Beach Chamber announced on Twitter Wednesday that the city had declared a curfew from 10 p.m. Wednesday through 6 a.m. Thursday. Officials say other coastal communities including Surfside Beach have implemented similar curfews.

Gov. Henry McMaster has ordered the evacuation of much of South Carolina’s coast as the state waits for the storm projected to come ashore in the Carolinas later this week. 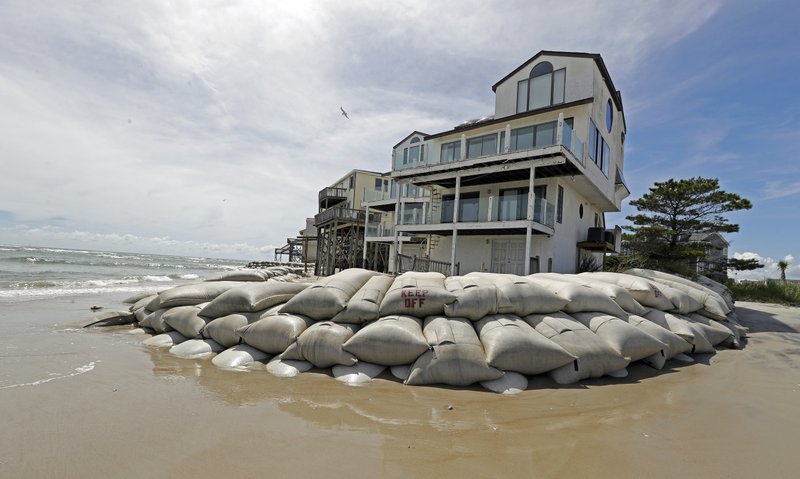 Forecasters say Hurricane Florence has slightly weakened but remains a potentially catastrophic Category 3 storm as it continues toward North and South Carolina.

The National Hurricane Center said Wednesday evening that the storm is expected to bring life-threatening storm surge and rainfall to the Carolinas as it approaches the coast Thursday and Friday.

As of 8 p.m., the storm was centered 335 miles (540 kilometers) southeast of Wilmington, North Carolina and was moving northwest at 16 mph (26 kph). Its maximum sustained winds have dropped slightly to 115 mph (185 kph).

The White House says Trump spoke with Sens. Lindsay Graham and Tim Scott of South Carolina and Sen. Richard Burr of North Carolina to convey that the full support of the federal government stands ready to assist their states.

Earlier Wednesday Trump warned people in the path of the storm to heed the advice of state and local officials. He says: “protection of life is the absolute highest priority.”

Trump is also boasting about the state of federal preparedness. He says: “They’re all ready and we’re getting tremendous accolades from politicians and the people.”

Many who live in Virginia Beach began to take major storms more seriously after the remnants of Hurricane Matthew deluged the region in 2016. Homes that never flooded before were inundated.

Thirty-three-year-old Brady Osborne has not forgotten the 16 inches of rain that poured into his garage and the flooding the hurt home values in his neighborhood. He said he had used a canoe to reach dry land to pick up groceries.

He shoveled sand into sandbags on Wednesday to fortify his home.

He says “Matthew taught us.”

The forecast for Hurricane Florence’s wrath was only improving Wednesday for coastal Virginia, which is more than 200 miles north of where the storm is expected to strike. But many who live in this low-lying and flood-prone region weren’t taking any chances.

Je’Nein Ferrell is a 44-year-old adjunct professor at Norfolk State University. She shoveled sand into sandbags Wednesday with images of Houston following Hurricane Harvey in her head.

Ferrell was among throngs of people who took the city of Virginia Beach up on its offer of free sand for sandbagging. More than 100 people had cycled through in two hours, circling around sand piles as they were dumped from a truck.

Ferrell planned to secure some areas around her mother’s Virginia Beach town home. She said she would then consider whether she would leave Norfolk, where she lives.

She added that the weather has become increasingly unpredictable with climate change.

She says, “We can’t base our present on our past.” 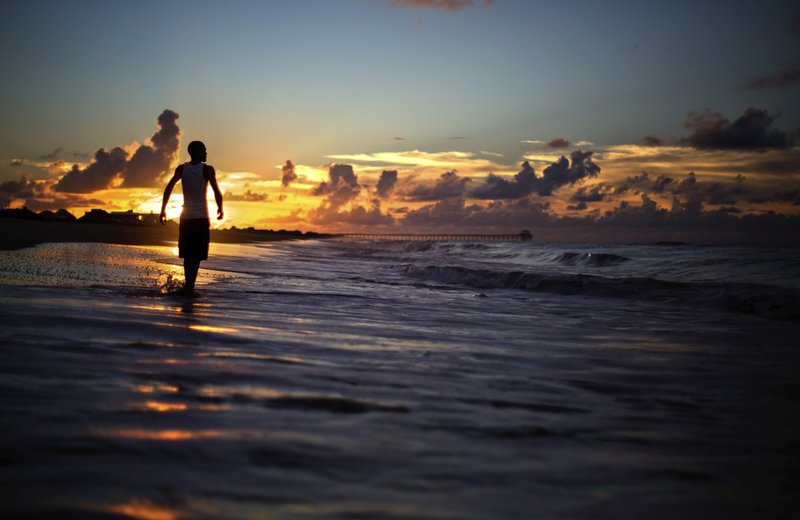 South Carolina is planning to end the reversal of some interstate lanes that were switched to help move people away from the state’s coast as Hurricane Florence approaches.

Department of Public Safety Director Leroy Smith told reporters that, starting Thursday at 6 p.m., officers will close Interstate 26 lanes that had been switched from eastbound to westbound to move people away from the Charleston area toward the center of the state.

Gov. Henry McMaster on Tuesday ordered much of the state’s coast evacuated and reversed eastbound lanes to help people leave. Smith says officers will begin closing down the reversed lanes and gradually switch traffic back to its regular patterns.

Many officers are on the road during lane reversals, manning each exit and ensuring drivers don’t drive around barricades. The change allows agencies like Smith’s to pull back their officers when tropical storm-force winds are expected to arrive in the state. 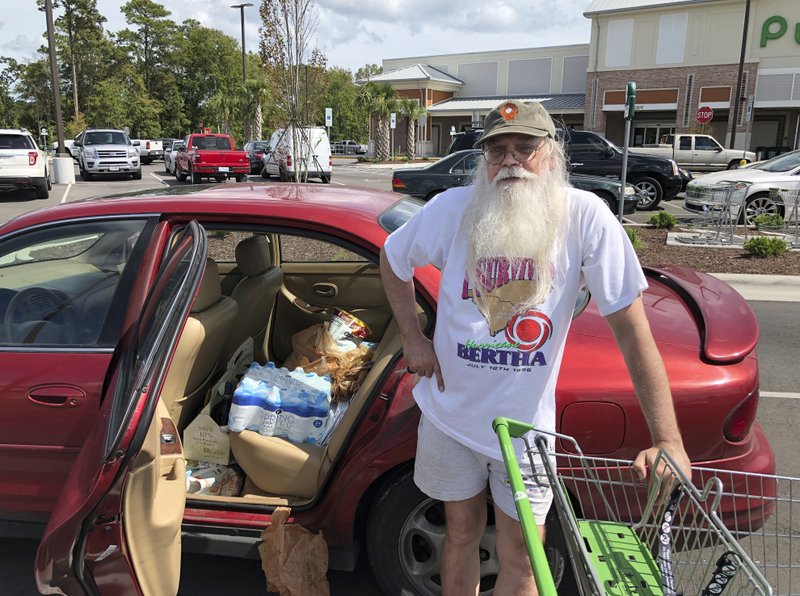 Steve Wareheim poses for a photo after making one last grocery run to prepare for Hurricane Florence at a grocery store in Ocean Isle Beach, N.C. on Wednesday, Sept. 12, 2018. Wareheim decided to ride out the storm at home after buying a generator this week.

West Virginia agencies are mobilizing to respond to problems arising from Hurricane Florence.

The governor’s office says in a news release the Division of Homeland Security and Emergency Management activated its emergency operations center Wednesday.

The statement says 50 National Guard members are prepared to assist in locations across the state. Nearly 70 tractor-trailer loads of supplies have arrived at the Guard’s 167th Airlift Wing in Martinsburg.

In June 2016, a series of thunderstorms pelted a wide swath of West Virginia. Nine inches of rain fell in 36 hours in some areas, leaving 23 dead statewide and destroying thousands of homes, businesses and infrastructure.

The National Weather Service forecast says up to 4 inches of rain is possible in parts of the state through next week. 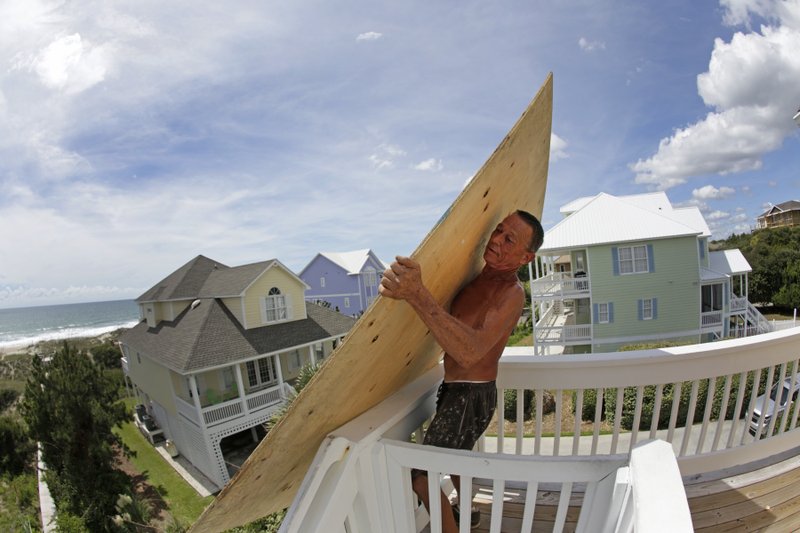 Tim Avery pulls boards to the third story of a home as he prepares for Hurricane Florence at a home in Emerald Isle N.C., Wednesday, Sept. 12, 2018.

President Donald Trump is urging those living in the path of Hurricane Florence to comply with all evacuation orders and emergency instructions.

Speaking Wednesday at the White House, Trump said “protection of life is the absolute highest priority.”

He warned that Florence could be “one of the biggest ever to hit the East Coast.”

The storm is still a Category 3 hurricane with winds of 120 mph (195 kph) as it approaches the North and South Carolina coasts.

Trump says his administration has been in “close contact” with the state and local governments soon to be impacted by the massive storm.

The National Weather Service is predicting that the hurricane will blow ashore as early as Friday afternoon along the North Carolina-South Carolina line, then push its rainy way westward, with a potential for catastrophic inland flooding.

(This item has been edited to clarify that forecasters are saying that the storm could reach land as early as Friday afternoon).

A sign posts a mandatory evacuation prior to Hurricane Florence in Emerald Isle N.C., Wednesday, Sept. 12, 2018.

Gov. Ralph Northam said Wednesday that the storm’s path is still unpredictable and residents who were ordered to evacuate beginning Tuesday should continue to stay away. The evacuation order applies to about 245,000 people in low-lying coastal areas.

Officials said 59 local shelters and two state-managed shelters are either open or about to open across Virginia. 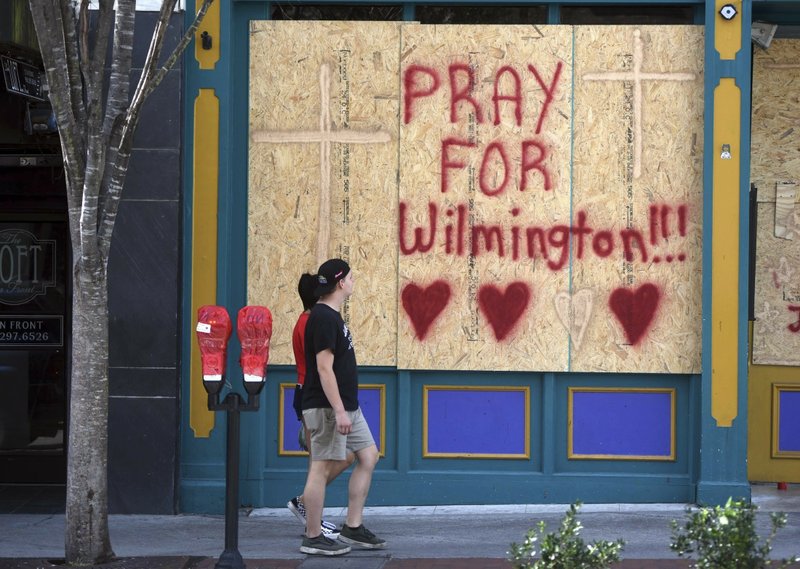 A spokeswoman for Love’s Travel Stops says demand for gasoline has doubled at many of the company’s truck-stop locations in the path of Hurricane Florence.

At least 1.7 million people in the Carolinas and Virginia have been warned to evacuate, and others are hunkering down. Tracking service GasBuddy says that has led to a run on gas stations that left about 5 percent of all service stations in North Carolina out of gasoline by Wednesday.

Love’s spokeswoman Kyla Turner says the company brought in drivers from other areas and increased deliveries to keep its locations stocked. She says it had not run out at any of its 27 locations in Georgia, the Carolinas and Virginia.

North Carolina’s top agriculture leader says farmers have made progress harvesting before Hurricane Florence arrives, thanks in part to loosened transportation rules before the storm. But he says several crops are still in the field and could be threatened by high winds and flooding.

Agriculture Commissioner Steve Troxler said Wednesday at a news conference that more than half of the state’s tobacco crop has been harvested, along with three-quarters of the corn in eastern North Carolina fields. But he says the sweet potato and peanut harvests are just getting started and all of the cotton crop is still in the field. North Carolina is the nation’s leading sweet potato producer.

Troxler says livestock is being moved to higher ground or sent to market earlier.

Officials in the Carolinas are closing down ports as Hurricane Florence approaches their coastlines.

North Carolina officials said Wednesday that they were closing the Ports of Wilmington and Morehead City to commercial truck traffic on Wednesday. Both facilities will be closed to traffic of any kind starting Thursday.

South Carolina State Ports Authority spokeswoman Erin Dhand says the Port of Charleston is closing to container traffic Thursday and may re-open on Sunday, depending on the storm’s track and overall conditions.