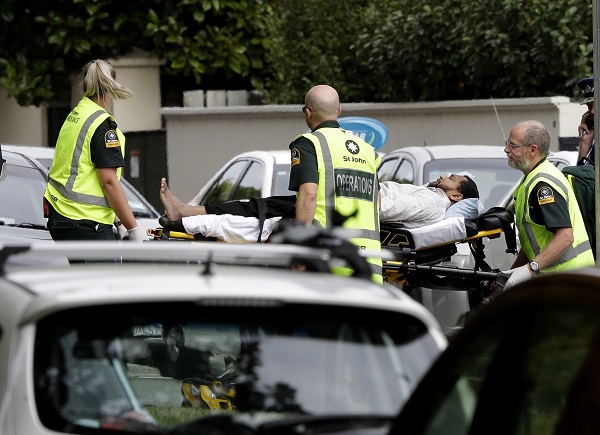 Ambulance staff take a man from outside a mosque in central Christchurch, New Zealand, Friday, March 15, 2019. A witness says many people have been killed in a mass shooting at a mosque in the New Zealand city of Christchurch. (Photos: AP)

The Latest on shootings at mosques in New Zealand (all times local):

Prime Minister Jacinda Ardern says the shootings at two mosques in New Zealand appear to have been a well-planned "terrorist attack."

Ardern said 40 people were killed at two mosques in the city of Christchurch and more than 20 seriously injured.

She said earlier Friday that migrants and refugees appeared to be most affected by the shootings.

A man who claimed responsibility for the attack said he was a 28-year-old Australian and described anti-immigrant motives in a manifesto.

Police earlier said four people were taken into custody, and one has been identified as Australian.

Ardern said in a news conference, "It is clear that this can now only be described as a terrorist attack. From what we know, it does appear to have been well planned."

Prime Minister Jacinda Ardern says 40 people have been killed in an attack at mosques in the New Zealand city of Christchurch.

Four people have been detained, and one is Australian.

Ardern said more than 20 people were seriously injured during the shootings at two mosques during Friday prayers.

Thirty fatalities occurred at the Masjid Al Noor mosque in central Christchurch. Seven of the dead were inside the suburban Linwood Masjid Mosque and three died outside the same mosque.

A man who claimed responsibility for the shootings said in a manifesto that he was a 28-year-old white Australian who came to New Zealand only to plan and train for the attack.

Australian Prime Minister Scott Morrison has confirmed that one of the four people taken into custody in New Zealand's mosque shootings is an Australian.

A man who claimed responsibility for the shootings said in a manifesto that he was a 28-year-old white Australian who came to New Zealand only to plan and train for the attack.

New Zealand police said they had arrested four people. Morrison on Friday confirmed one of those who were arrested was an Australian-born citizen. He said Australian authorities were assisting with the investigation.

Morrison said Australians were shocked, appalled and outraged by the attack. He described the gunman as "an extremist, right-wing, violent terrorist."

Indonesia's foreign minister says six Indonesians were at the Al Noor Mosque in New Zealand when a shooting occurred and three of them escaped.

Foreign Minister Retno Marsudi said, "We are looking for three other Indonesian citizens."

Police have described multiple fatalities in shootings at two mosques in the city of Christchurch and say four people are in custody.

The Indonesian Embassy in Wellington sent a team to Christchurch that is coordinating with New Zealand officials.

The foreign ministry says there are 330 Indonesian citizens in Christchurch, 130 of them students.

It said it strongly condemns the attack. "The government and the people of Indonesia convey deep condolences to the victims and their families."

New Zealand police say they're not aware of other suspects beyond the four who have been arrested after two mosque shootings but they can't be certain.

Police Commissioner Mike Bush did not elaborate on the suspects who are in custody.

The shootings occurred at two mosques in the Christchurch area during Friday afternoon prayers.

A witness described multiple deaths at the Masjid Al Noor mosque in central Christchurch. A witness who heard about five gunshots at the suburban Linwood Masjid Mosque said two wounded people were carried out on stretchers.

New Zealand police say they have taken into custody three men and one woman over the shootings at two mosques in Christchurch.

The shootings involved multiple fatalities but authorities have not said how many.

A man who claimed responsibility for the shootings left a 74-page anti-immigrant manifesto in which he explained who he was and his reasoning for his actions. He said he considered it a terrorist attack.

New Zealand Police Commissioner Mike Bush said anyone thinking of going to a mosque should stay put and close their doors.

Prime Minister Jacinda Ardern said at a Friday afternoon news conference that one suspect was in custody but "there could be others involved."

A man who lives near the Masjid Al Noor mosque in central Christchurch said many people were dead there. A witness to a second shooting told New Zealand media he saw two wounded people being transported by rescuers afterward.

Police said there were multiple fatalities and one person was in custody, but no details were immediately available.

Ardern said at a Friday afternoon news conference, "what has happened here is an extraordinary and unprecedented act of violence."

She said while many people affected may be migrants or refugees "they have chosen to make New Zealand their home and it is their home. They are us. The person who has perpetuated this violence against us is not."

New Zealand media say a shooting has occurred in a second mosque in the city of Christchurch.

No details were immediately available.

Earlier Friday afternoon, police had urged people to stay indoors as authorities responded to a shooting at the Masjid Al Noor mosque.

A neighbor described mass casualties inside the mosque and said he saw the gunman flee.

A witness says many people have been killed in a mass shooting at a mosque in the New Zealand city of Christchurch.

Police have not described the scale of the Friday shooting but urged people in central Christchurch to stay indoors.

Witness Len Peneha says he saw a man dressed in black enter the Masjid Al Noor mosque and then heard dozens of shots, followed by people running from the mosque in terror.

Peneha says he went into the mosque to try and help: "I saw dead people everywhere." 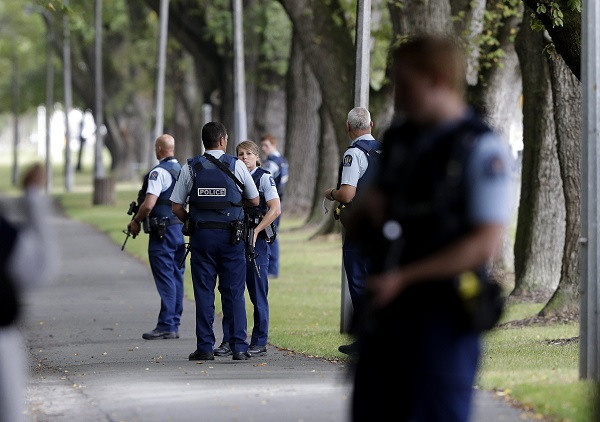 Police keep watch at a park across the road from a a mosque in central Christchurch, New Zealand, Friday, March 15, 2019.