The Latest on the Easter attacks in Sri Lanka (all times local): 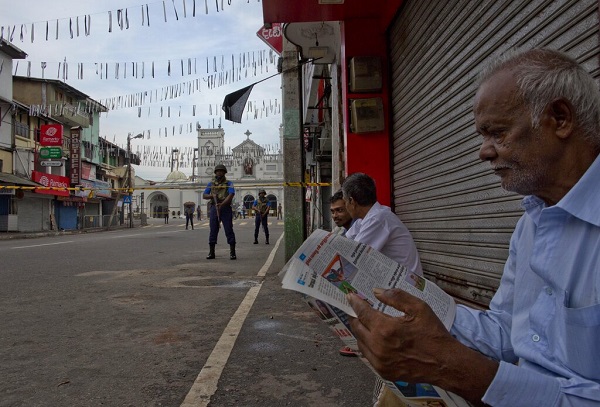 An official Sri Lanka police Twitter account has been deleted after it misidentified an American human rights activist as a suspected Sri Lankan serial bomber, causing a social media furor.

Late Thursday, police posted the names and photos of three women and two men on Twitter that they said were at-large suspects in the Easter Sunday bombing attacks that killed more than 250 people.

One of the names was of Muslim U.S. activist Amara Majeed, who quickly tweeted that she had been falsely identified.

Sri Lankan police replied with an apology for the "inconvenience."

Some mosques in Sri Lanka are holding communal Friday prayers despite the potential for attacks after the Easter suicide bombings.

At 12:10 pm, the call to prayer echoed through the Masjidus Salam Jumma Masjid mosque in Colombo.

The U.S. Embassy had warned Americans to stay away from all religious ceremonies this weekend over the attacks, which have been claimed by the Islamic State group.

Australia has warned travelers that "terrorists are likely to carry out further attacks in Sri Lanka."

The government updated its travel advice website on Friday to say "attacks could be indiscriminate, including in places visited by foreigners."

The warnings follow suicide bombings at churches and hotels on Easter that killed more than 250 people. Sri Lankan authorities say some suspects are still being sought.

Australia's threat level remained unchanged, advising travelers to "reconsider your need to travel" to Sri Lanka, one tier below the highest warning of "do not travel."

The U.S. Embassy has also warned Americans to avoid places of worship in Sri Lanka due to potential for more attacks, and Britain advised its citizens against traveling to the island country.

Sri Lankan authorities say the suspected leader of the Easter Sunday attacks that killed at least 250 people died in the Shangri-La Hotel bombing in Colombo.

Police said on an official Twitter account Friday that Mohamed Zahran died in the attack. He was the suspected leader of a local militant group known as National Towheed Jamaat, which officials say carried out the series of suicide bombings at hotels and churches.

Police also said they have arrested the group's second-in-command.

They said the militants received some of their weapons training overseas.

Australia's prime minister said earlier on Friday that it had been confirmed that the Sri Lanka attackers were supported by the Islamic State group.

Sri Lanka's president has appealed to the island nation not to view its minority Muslim community as terrorists in the wake of Easter Sunday attacks that officials say were carried out by a local Muslim extremist group.

President Maithripala Sirisena spoke to Colombo-based reporters on Friday. He says Sri Lanka has the capability "to completely control ISIS activities" in the country, referring to the Islamic State group, which has claimed responsibility for the bombings that killed at least 250 people.

Officials have acknowledged that some intelligence units were made aware of a plot to attack churches weeks in advance. Sirisena says he was kept in the dark and placed the blame squarely on Sri Lanka's defense secretary and police chief.

He says the defense secretary had resigned but would stay on until a replacement could be named, and that the police chief would soon step down, too.

Australia's prime minister says the Sri Lankan militants blamed for the Easter attacks in that country had support from the Islamic State group.

Morrison said the attacks demonstrated a new front in fighting terrorism, that militants who fought in Syria and Iraq had returned home with skills to carry out attacks while being part of a broader network that could provide money, training and target identification.

Heavy security is out on the streets of Sri Lanka's capital after warnings of further attacks by the militant group blamed for the Easter bombing that killed at least 250 people.

At St. Anthony's Church, one of those struck in the attacks Sunday, there were more soldiers than normal Friday. Shops nearby remained closed.

Gration Fernando crossed himself when he looked at the church after walking out of his shop there. Fernando says he, like other Sri Lankans, was worried about further attacks.

Authorities told Muslims to pray at home rather than attend communal Friday prayers that's the most important of the week.