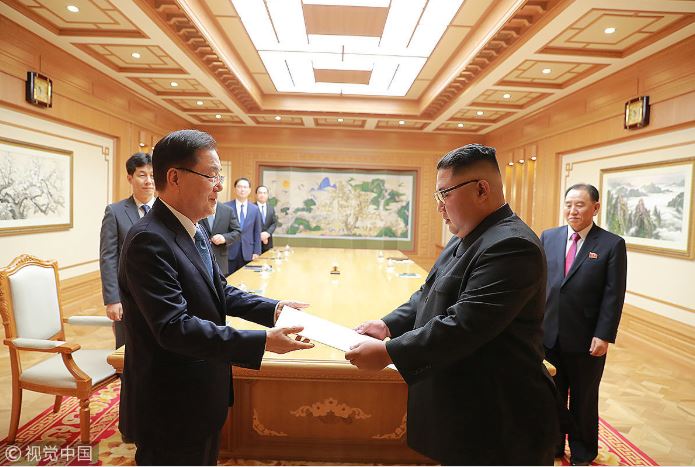 The two sides agreed to hold this summit during a high-level dialogue meeting earlier in August, after Kim and Moon first met in Panmunjom on April 27 and held a meeting again on May 26.

"First, the Seoul and the Pyongyang agreed to hold an inter-Korean summit in Pyongyang between Sept. 18-20, and to hold high-level negotiations early next week to prepare for the summit," Chung Eui-yong said of his one-day trip to the DPRK's capital.

It will be the third Moon-Kim summit after the first meeting in the border village of Panmunjom on April 27, then again on May 26.

Chung said the upcoming summit will review the implementation of the inter-Korean summit agreement reached at the leaders' first meeting in Panmunjom, Yonhap reported.

DPRK's top leader Kim Jong Un has renewed his commitment to the denuclearization of the Korean Peninsula as the country's state media reported on Thursday.

Kim made the remarks during his meeting with the delegation from South Korea on Wednesday.

"Chairman Kim Jong-un reaffirmed his firm commitment to complete denuclearization of the Korean Peninsula and expressed his willingness to closely cooperate with not only South Korea but also the United States to that end," the top security adviser to the South Korean president said.

"Noting that it is our fixed stand and his will to completely remove the danger of armed conflict and horror of war from the Korean peninsula and turn it into the cradle of peace without nuclear weapons and free from nuclear threat, he said that the north and the south should further their efforts to realize the denuclearization of the Korean peninsula," the DPRK's official Korean Central News Agency reported.

The talks have stalled since US President Donald Trump cancelled Secretary of State Mike Pompeo's trip to the DPRK last month.

"(The countries) agreed to discuss specific ways to build their mutual trust and prevent armed conflicts while continuing their ongoing talks on reducing military tension at the inter-Korean summit," Chung said.

The two also agreed to open their joint liaison office in the DPRK's border village of Kaesong before the third Moon-Kim summit, he added.