WORLD The second virus wave: How bad will it be as lockdowns ease?

The second virus wave: How bad will it be as lockdowns ease? 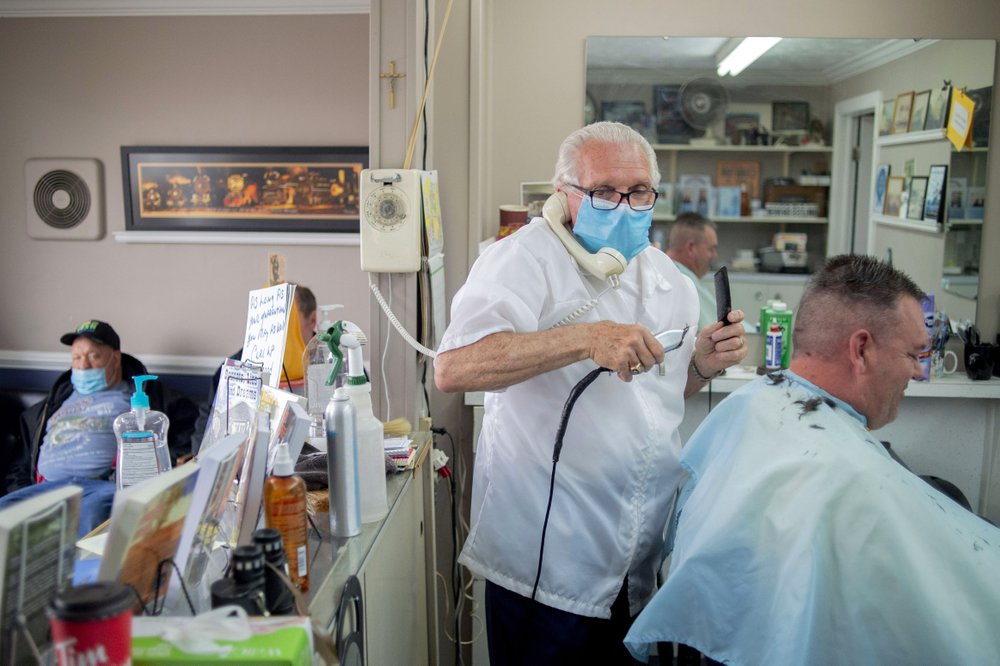 Karl Manke, 77, left, wears a mask while cutting hair, Tuesday, May 5, 2020 at Karl Manke's Barber and Beauty Shop in Owosso, Mich. Manke re-opened his doors on Monday in defiance of Gov. Gretchen Whitmer's executive order mandating salons, barbershops and other businesses to stay closed. He has already given nearly 100 haircuts, and fields more calls than that daily, all while continuing to cut hair. (Photo: AP)

From the marbled halls of Italy to the wheat fields of Kansas, health authorities are increasingly warning that the question isn’t whether a second wave of coronavirus infections and deaths will hit, but when — and how badly.

In India, which relaxed its lockdown this week, health authorities scrambled Wednesday to contain an outbreak at a huge market. Hard-hit New York City shut down its subway system overnight for disinfection. Experts in Italy, which just began easing some restrictions, warned lawmakers that a new surge of infections and deaths is coming, and they urged intensified efforts to identify victims, monitor their symptoms and trace their contacts.

German Chancellor Angela Merkel said after meeting with the country’s 16 governors that restaurants and remaining shops will be allowed to reopen in the coming weeks but that restrictions will be reimposed if new infections hit a certain level.

“There will be a second wave, but the problem is to which extent. Is it a small wave or a big wave? It’s too early to say,” said Olivier Schwartz, head of the virus and immunity unit at France’s Pasteur Institute. France, which hasn’t yet eased its lockdown, has worked up a “re-confinement plan” to ready for that second wave.

Many areas are still struggling with the first wave. Brazil for the first time locked down a large city, the capital of Maranhão state. Across the ocean, the number of confirmed coronavirus cases in Africa has shot up 42% in the past week. Infections were expected to surpass 50,000 there on Wednesday.

“Make no mistakes: This virus is still circulating in our community, perhaps even more now than in previous weeks,” said Linda Ochs, director of the Health Department in Shawnee County, Kansas.

The virus is known to have infected more than 3.6 million and killed more than 251,000 people, according to a tally by Johns Hopkins that all experts agree is an undercount because of limited testing, differences in counting the dead and concealment by some governments.

“Burying both parents at the same time? It’s hard,” said Desmond Tolbert, who lost his mother and father in rural Georgia. Because they had the virus, he couldn’t be with them when they died.

The researchers behind a widely cited model from the University of Washington nearly doubled their projection of deaths in the U.S. to around 134,000 through early August, in large part because of the easing of state stay-at-home restrictions.

President Donald Trump, with his eye on being reelected in November, is pushing hard to ease the social-distancing orders and resuscitate the U.S. economy, which has seen over 30 million workers lose their jobs in less than two months. Though the White House had signaled Tuesday that it would begin winding down the country’s coronavirus task force, Trump tweeted Wednesday that it would continue “indefinitely with its focus on SAFETY & OPENING UP OUR COUNTRY AGAIN.”

Underscoring those economic concerns, the European Union predicted the worst recession in its quarter-century history, and the U.S. unemployment rate for April, which comes out Friday, is expected to hit a startling 16 percent, a level last seen during the Great Depression of the 1930s.

A century ago, the Spanish flu epidemic’s second wave was far deadlier than its first, in part because authorities allowed mass gatherings from Philadelphia to San Francisco.

As Italy’s lockdown eased this week, Dr. Silvio Brusaferro, president of the Superior Institute of Health, urged “a huge investment” of resources to train medical personnel to monitor possible new cases. He said tracing apps — which are being built by dozens of countries and companies — aren’t enough to manage future waves of infection.

“We are not out of the epidemic. We are still in it. I don’t want people to think there’s no more risk and we go back to normal,” said Dr. Giovanni Rezza, head of the institute’s infectious-disease department.

Lothar Wieler, head of Germany’s national disease control center, said scientists “know with great certainty that there will be a second wave” of infections but said Germany is well-prepared to deal with it. The country has been hailed for testing widely and has had one-fourth the number of deaths in Italy or Britain, which have smaller populations.

Britain has begun recruiting 18,000 people to trace contacts of those infected. British officials acknowledge that they should have done more testing and tracing earlier and could learn from South Korea, which brought its outbreak under control by rigorously testing, tracing and isolating infected people.

South Africa, which has years of experience tracking HIV and other infections, has more than 30,000 experienced community tracers at work. Turkey has 5,800 teams of contact tracers who have tracked down and tested nearly half a million people.

India was concentrated on the immediate drama around the market in the southern city of Chennai, which is now tied to at least 1,000 virus cases. An additional 7,000 people connected to the now-shuttered Koyambedu market are being traced and quarantined. Experts are worried about a health catastrophe in a country of 1.3 billion people with an already stressed medical system.

New confirmed daily infections in the U.S. exceed 20,000, and deaths per day are well over 1,000, according to the Johns Hopkins tally. And public health officials warn that the failure to lower the infection rate could lead to many more deaths — perhaps tens of thousands — as people venture out and businesses reopen.

“The faster we reopen, the lower the economic cost — but the higher the human cost, because the more lives lost,” New York Gov. Andrew Cuomo sai d. “That, my friends, is the decision we are really making.”

New York City Mayor Bill de Blasio warned on CNN that some states may be reopening too quickly.

“My message to the rest of the country is learn from how much effort, how much discipline it took to finally bring these numbers down and follow the same path until you’re sure that it’s being beaten back,” he said, “or else if this thing boomerangs, you’re putting off any kind of restart or recovery a hell of a lot longer.”

Trump acknowledged the toll but argued that keeping the U.S. economy closed carries deadly costs of its own, such as drug abuse and suicides.