WORLD The Trump Show: What to watch at the hybrid Republican convention

The Trump Show: What to watch at the hybrid Republican convention 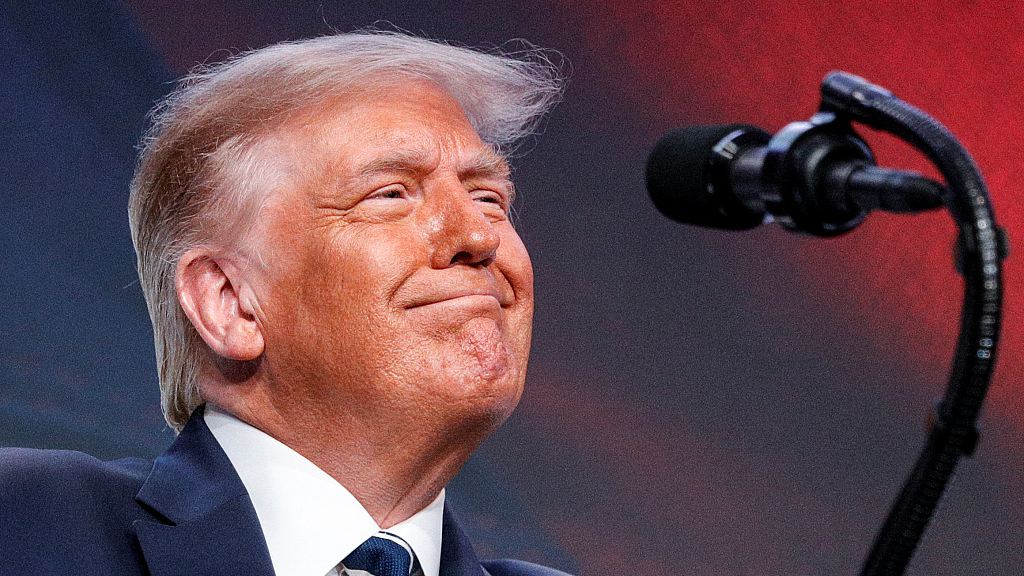 After a relatively slick and drama-free Democratic National Convention, the Republicans will begin their attempt at a mid-pandemic showpiece, during which Donald Trump will be formally nominated as the party's presidential candidate, on Monday.

The Republicans have promised a "nightly surprise," Axios reported, and Trump is expected to feature heavily in all four 150-minute TV broadcasts, organized in part by a former Celebrity Apprentice producer, as he aims to gain ground on Democratic nominee Joe Biden.

Whereas the Democrats committed early to a fully virtual convention, giving the party time to plan four two-hour TV spots featuring a mix of political and celebrity star power alongside stories from everyday Americans, the Republican preparations have been more chaotic.

The party initially intended to hold an in-person event in Charlotte, North Carolina but that was moved to Jacksonville, Florida in June after a dispute over COVID-19 restrictions. The Florida plans were scrapped in July after a sharp spike in infections, and now the four-day event is back in Charlotte – but also Washington and Maryland, and at least partially online.

Trump is, controversially, set to give his acceptance speech on Thursday from the South Lawn of the White House to an audience of congressional Republicans, with a firework display likely to follow. The use of federal government property for a party campaign event has raised some ethical eyebrows, and could yet have repercussions.

Several members of the Trump family, including First Lady Melania Trump, as well as the president's children, Ivanka, Tiffany, Donald Jr and Eric, are expected to feature.

A traditional-style roll call, a state-by-state nomination of the party's presidential candidate, will take place on Monday.

The Democratic version featured a virtual visit to each state, but the Republicans are bringing 336 delegates to a ballroom in Charlotte to formally nominate Trump. The president is expected to attend in person, alongside Vice President Mike Pence. 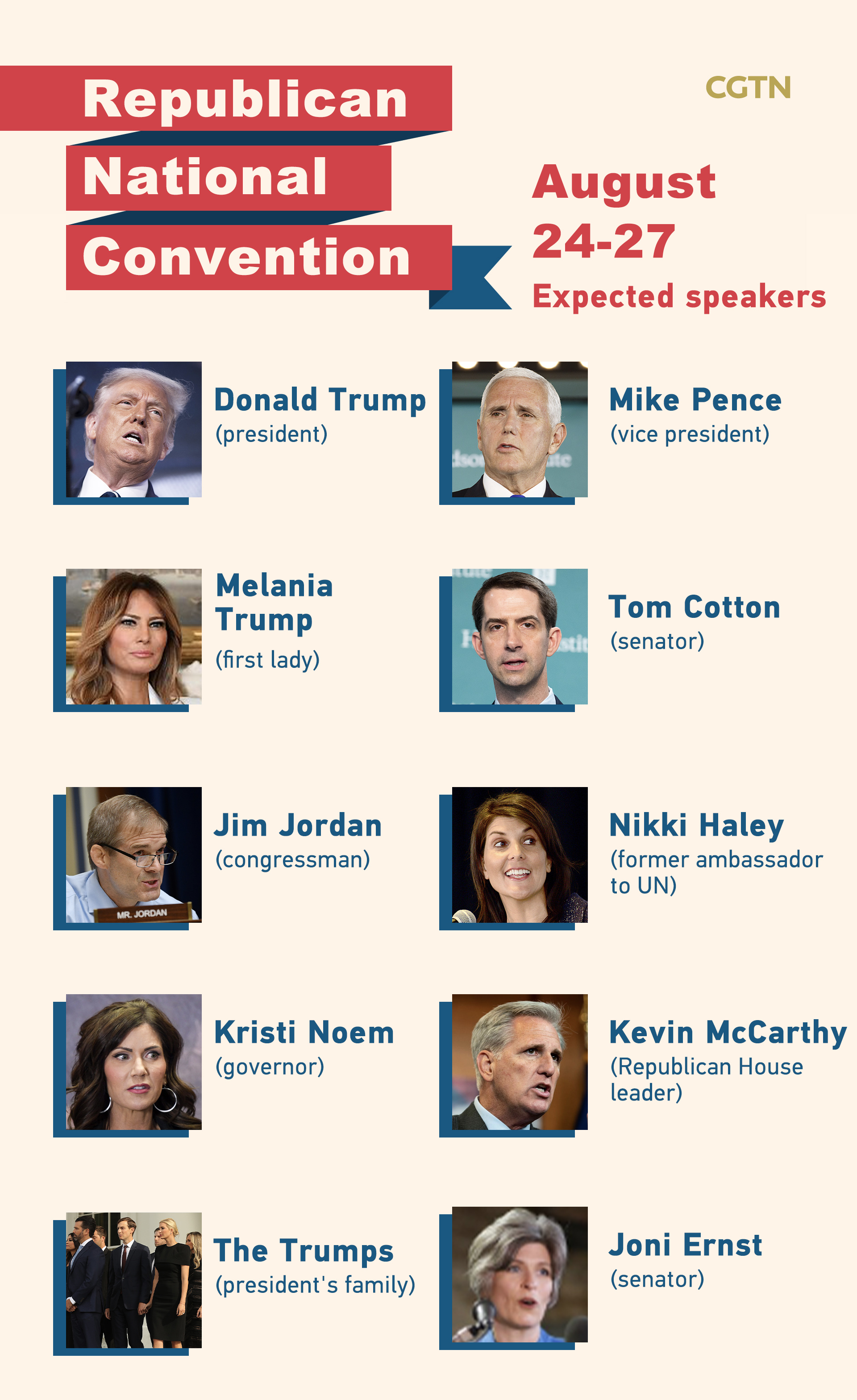 Proceedings will then move to the Mellon Auditorium in Washington, D.C., though the main speeches are expected to come from Fort McHenry in Maryland – where Pence will speak on Wednesday – and the White House, where Melania Trump will deliver an address on Tuesday.

The party has kept much of the schedule under wraps, though the list of speakers is likely to be dominated by staunch Trump supporters and everyday Americans rather than the party heavyweights seen at the Democratic event.

Every Democratic presidential nominee since 1992 lined up to back Biden and criticize Trump, but in a sign of a transformed Republican Party neither Mitt Romney nor George W. Bush are likely to have any role over the coming days. Cindy McCain, the widow of John McCain, the 2008 nominee who passed away in 2018, has lent her voice to a video in support of Biden.

Trump loyalists like Representative Jim Jordan are expected to be given speaking slots, alongside younger Republicans who may run for the presidency in 2024, such as former U.S. Ambassador to the UN Nikki Haley and foreign policy hawk Tom Cotton.

Holding the convention directly after the Democrats give the Republicans an advantage – the party can rebut the claims made by their rivals and also learn from the hits and misses of their virtual event.

With just 71 days until the November 3 election day and less than a month before voting begins in some states, Trump needs to take every opportunity possible to change the trajectory of the race and is banking on a TV show experience to cut through. 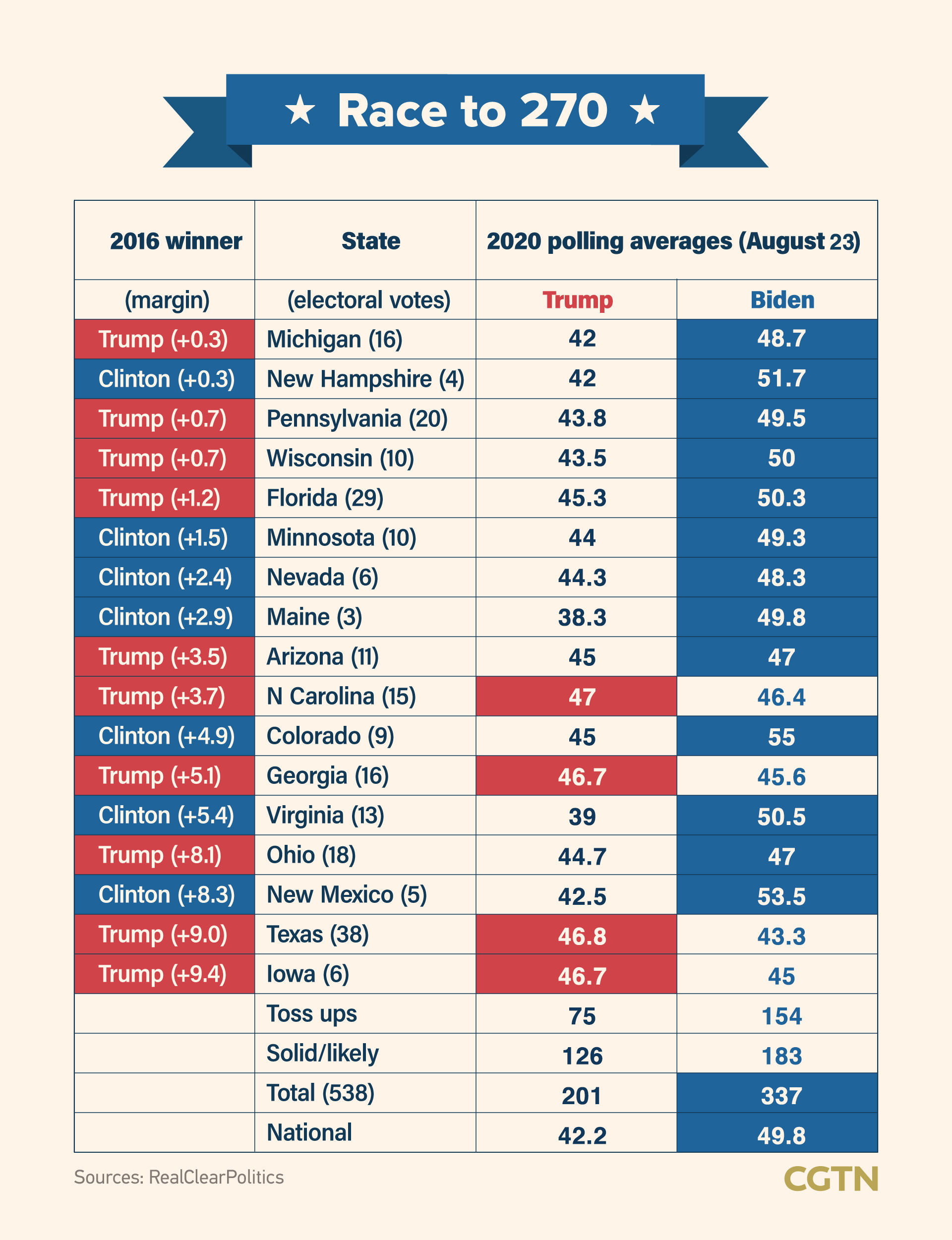 Biden is ahead of Trump in the polls in the battleground states and by an 7.6-point margin nationally, according to the latest RealClearPolitics average. A CGTN analysis of state-by-state polling data suggests the Democrats would comfortably win in the Electoral College, 337-201, if the election were held today.

However, there is some evidence that Trump is beginning to close the gap in swing states like Pennsylvania, and after several failed reboots, the president will be hoping the convention bounces him back into contention and give his campaign a fundraising boost.

The notoriously competitive president will also have an eye on beating the numbers the Democrats reported for their convention: The Biden campaign claims the party raised 70 million U.S. dollars during the event, and that it was watched by around 122 million people over the four days.

The Democrats are planning a series of virtual events to draw media attention away from the Republican convention and make their case, with House Speaker Nancy Pelosi as well as primary contenders Cory Booker and Pete Buttigieg among those scheduled to take part. 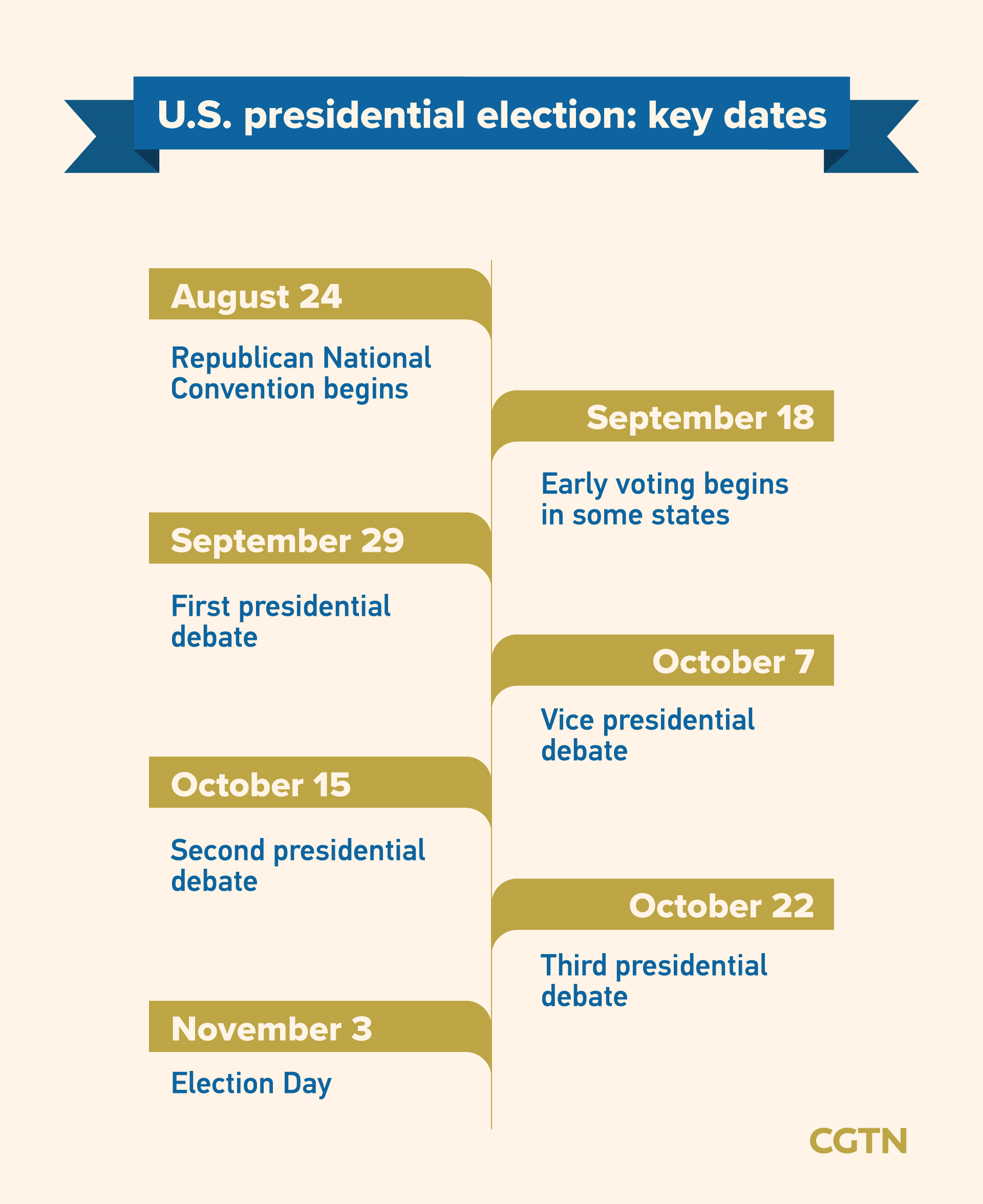