Blocks away from the wreckage of a Florida apartment tower that suddenly collapsed last week and left scores of people missing, Patrick Williamson sat with his German Shepherd, offering her company to whomever needed it. 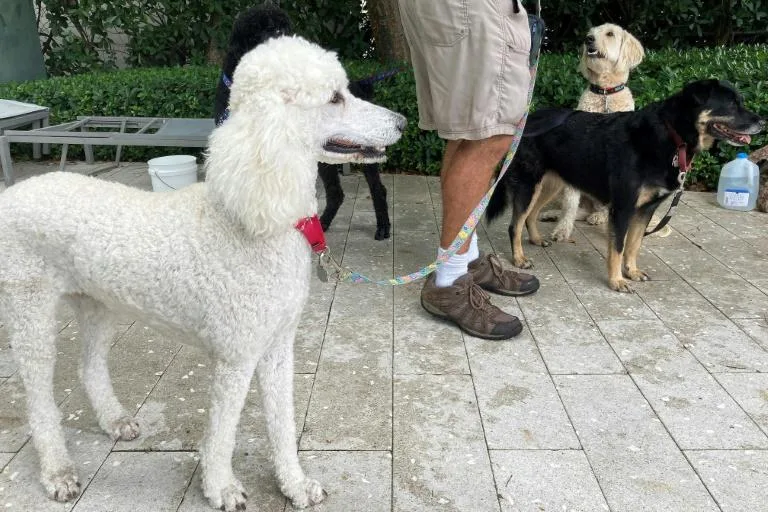 Dogs brought by volunteer Jay Harris to support those around the search-and-rescue operation after a building collapse in Surfside, Florida are seen June 28, 2021. (Photo: AFP)

Five-year-old Gracie has helped him cope with the trauma he experienced serving in the US Army in Iraq, and with 11 people confirmed dead and 150 missing after the oceanfront apartment block collapsed in the middle of the night, he hoped she could do the same for the people of Surfside, Florida.

As rescuers comb through the rubble of the 12-story building in hopes of finding survivors, aid workers from across the United States have traveled to the Miami-area town to offer everything from snacks to prayers to therapy.

Among them is the United Cajun Navy rescue group, which asked its volunteers to bring therapy dogs to help people cope with the trauma of the collapse.

"You start petting a dog, conversation happens and that is healing," said Jay Harris, a dog trainer who brought four of his clients' dogs -- three poodles and a mixed breed -- to Surfside to help whoever needed the sort of comfort only an animal can bring.

"It really helps with the stresses," he said.

The Cajun Navy is best known for its relief efforts after storms, but National Executive Director Jennifer Toby said around the time Hurricane Harvey devastated Texas and Louisiana, she came to realize that there was more to helping storm victims than providing supplies.

"When whole cities are wiped out and people in shelters for weeks at a time, it's really nice for emotional support animals to come in," she told AFP.

With Champlain Towers South reduced to rubble by an unexplained collapse that occurred over the course of seconds, the day-and-night rescue effort that brought engineers and specialists from as far away as Mexico and Israel has transformed Surfside.

Road closures and checkpoints now greet visitors to the community of pastel bungalows and beachside high-rise condominiums, leaving streets eerily empty, with the quiet punctuated only by convoys of police cars and buses carrying families of the missing and deceased.

Toney Wade, a veteran of search and rescue operations around the world, traveled from Louisiana with Hoeder, his three-year old Belgian Malinois, who specializes in finding the remains of drowning victims and once located bone fragments of a body that had been set ablaze.

But Wade was told there were enough rescuers and sniffer dogs engaged in the hazardous work of combing through the debris, which has seen workers use tools including heavy machinery, listening devices and even buckets to move rubble and locate people beneath.

On Monday afternoon, Wade sat under a canopy as one of the many rainstorms that had hampered the relief effort approached, hoping Hoeder could give those who needed it a moment of comfort.

"Dogs just show you pure love, nothing in between," said Wade, who is commander of the Cajun Coast Search and Rescue, another volunteer group.

A visit to family members of the victims was organized on Monday, but before the therapy dogs and their owners left their perch outside Surfside's community center, a relative of a victim ran up to Gracie, sharing a moment with Williamson's dog as tears welled in her eyes.

"Closure is key for everything," said Williamson. "These times we interact with people are going to be memories they can need if they find out they need more closure than they obtained."