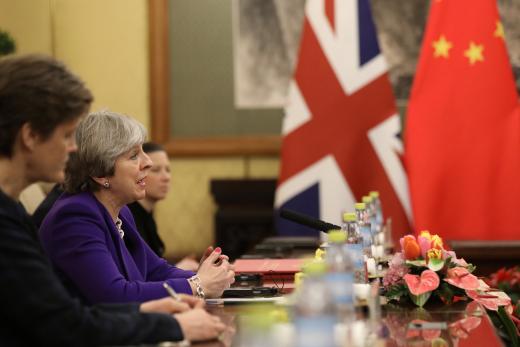 May attended an education and culture exchange at Wuhan University on arriving.

An intellectual concentration area, Wuhan has the most number of college students in the world.

"We've introduced our smart home system to the Prime Minister. All programming and designing were done by ourselves. The system can realize remote control. People can do what they want from home or via their smart phones and iPads. They can also use the app to see whether their TV set or air conditioner has been turned off. They can basically manage their entire home life," said Chen Qian, a student of No. 49 Middle School in Wuhan. Mrs. May with the Chinese actress Maggie Jiang at Wuhan University. REUTERS photo

"Culture and education exchange has played a key role in building a comprehensive strategic partnership between the two courtiers," May said.

Britain and China have made some cooperation in education. So far, there are more than 150,000 Chinese students enrolled at British universities. And the two countries have been learning from each other in elementary education, the Prime Minister noted.

The two countries will expand in math teacher exchange while more British primary schools will introduce Mandarin classes, it was added.

May also visited the Yangtze River and climbed to the top of Huanghelou (or Yellow Crane Tower) .

So far, 310 British-funded enterprises have invested in Wuhan, at a total investment of $5.25 billion. Seventeen universities in Wuhan and 12 universities in Britain have co-established 27 education projects.