WASHINGTON, Aug. 31 (Xinhua) -- More than 40 think tank scholars and former officials from China and the United States gathered in Washington and New York this week to discuss proper ways to solve current trade disputes and other issues concerning China-US bilateral ties in a constructive manner. 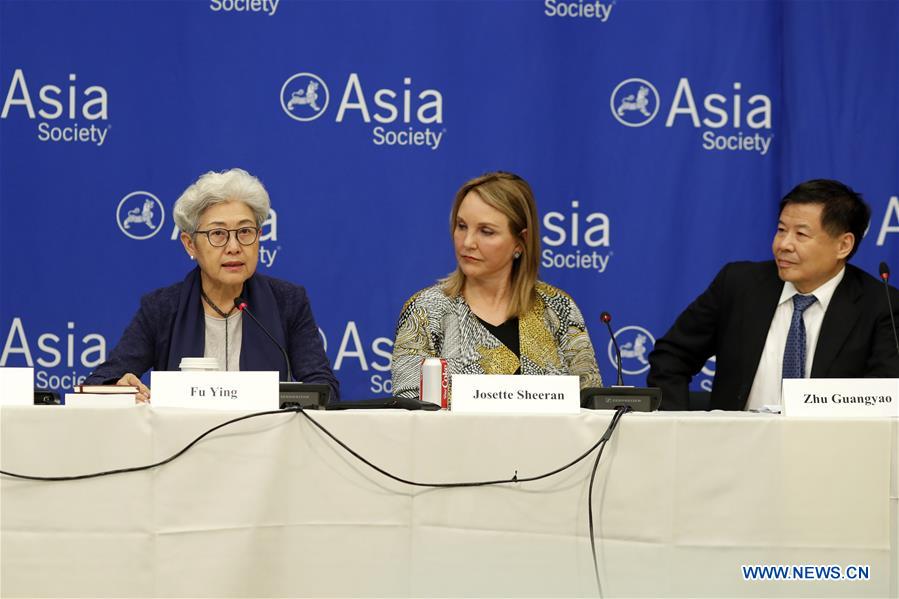 Fu Ying (L), a veteran diplomat and chair of academic committee of the National Institute for Global Strategy of the Chinese Academy of Social Sciences, Josette Sheeran (C), president and CEO of the Asia Society, and China's former Vice Finance Minister Zhu Guangyao attend a dialogue in New York, the United States, Aug. 29, 2018. More than 40 think tank scholars and former officials from China and the United States gathered in Washington and New York this week to discuss proper ways to solve current trade disputes and other issues concerning the China-US ties in a constructive manner. (Photo: Xinhua)

The two-day dialogues were hosted Wednesday and Thursday by Chongyang Institute for Financial Studies of Renmin University of China and several US think tanks, including the Asia Society Policy Institute, the Center for Strategic and International Studies, and the Brookings Institution.

In their exchanges, participants of the two sides agreed that at this critical juncture, candid dialogue between Chinese and US think tanks are crucial for both nations to communicate on their concerns and clear up misunderstandings, so as to enhance the government-to-government understanding, properly settle bilateral trade disputes and secure China-US relations at large.

Attendees noted during the dialogues that economic and trade relations remain an important basis of the China-US ties, which are one of the most important bilateral relations in the world.

They said that the current trade friction between the two countries have not changed the mutually beneficial and win-win nature of China-US trade ties, and their trade has boosted the economic development in the two nations.

As to the US government's relentless moves to escalate its trade friction with China, Chinese scholars said that the United States needs some major overhaul to address profound challenges under the pressure of socio-political division and transformation, and that Washington could not solve their problems by making China a scapegoat.

China stands firmly against US trade bullying, and China will not and cannot yield to bullying tarifs, they said.

Chinese scholars also said that they don't think the idea of "decoupling" China from the United States or the world economy is realistic at all.

China is an integral part of the global economy, and its increasingly mature market is an indispensable source of future global economic growth. Any "decoupling" attempt will seriously hurt the world economy, including that of the United States, they said.

US scholars said they believed that Washington eventually would have to solve its trade disputes with China through negotiations.

They suggested that the two nations should deal with their ties properly through expanding cooperation areas, managing differences and engaging in constructive dialogue, all in a bid to prevent the two nations from sliding towards confrontation.

Chinese and US participants also discussed short-term and long-run policy solutions to ease the current trade tensions between the two countries.

They hoped that the two governments could stay rational and strengthen communication, so as to stop imposing additional tariffs against each other and avoid further escalation of bilateral trade disputes.