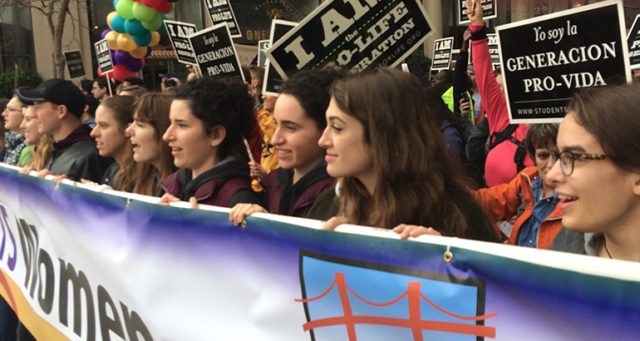 About 30,000 people demonstrated at Civic Center in San Francisco on the US west coat in an annual Walk for Life campaign against abortion.

The protesters holding a huge banner, which reads "Abortion HURTS Women," walked down Market Street in downtown San Francisco in the US western state of California.

The rally is part of a nation-wide event organized by the Walk for Life Organization in protest of abortion with strong support for the lives of unborn children and their families.

The demonstration is held every Jan. 22 on the anniversary of Roe v. Wade, the US Supreme Court decision that legalized abortion.

The Supreme Court legalized abortion nationwide in a landmark ruling 45 years ago.

In 1973, the Supreme Court issued the famous Roe v. Wade decision with a 7-2 vote that affirmed the legal right of women to have an abortion under the 14th amendment to the US Constitution.

The organizer of the annual event, the Walk for Life Organization, said on its website that the rally is held "to reach out to women harmed by abortion" and "to inform society of the damage done to women by abortion."

A week ago, US President Donald Trump attended the 45th March for Life in Washington, D.C. and proclaimed Jan. 22, 2018 as National Sanctity of Human Life Day.

"We are protecting the sanctity of life and the family as the foundation of our society," he said at the rally.