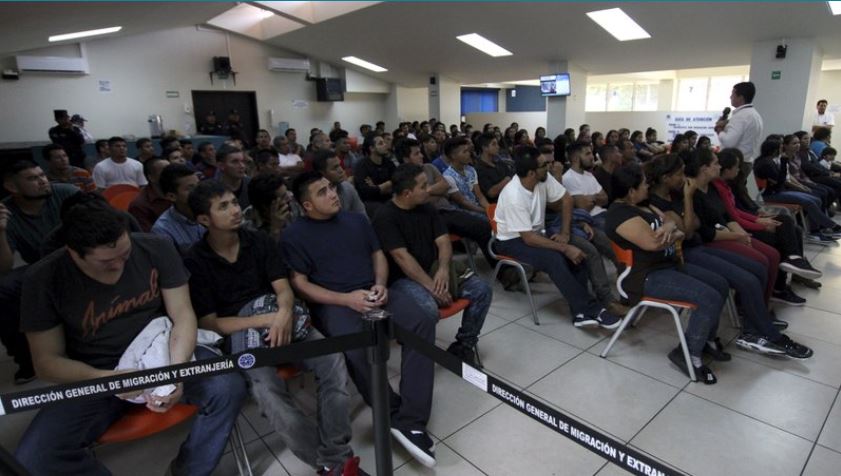 In this June 28, 2018 photo, Salvadoran deportees arriving from McAllen, Texas, listen to instructions from an immigration officer at La Chacra Immigration Center in San Salvador, El Salvador. Very few gang members try to get into the US. In fiscal year 2017, the US Border Patrol carried out 310,531 detentions of people who were in the US illegally, but only .09 percent of them belonged to the gangs operating in Central America, according to US Customs and Border Protection statistics. (Photo: AP/Salvador Melendez)

Why did she do it? Why did she travel more than a thousand miles by bus and then ford the Rio Grande with a small band of desperate voyagers? Why did she endure the arid Texas landscape, with nothing but her common-law husband’s black cap to shield her from the sun?

It was simple, the woman said.

She had already lost two children in the gang-ridden horror that is El Salvador. Her fear, she said, was that the killers “wanted to wipe out the whole family.”

So the couple set out for the US on May 13, hoping to reach Houston and her only surviving child, who had slipped across the US border a year ago.

They did not make it. Barely an hour after they crossed into Texas, they were captured by the Border Patrol, separated and locked up. On Thursday, the mom, her wrists and ankles in chains, was flown with about 100 other would-be migrants back to El Salvador.Thousands of others are in the same situation, having fled from ultraviolent gangs in El Salvador, Honduras and Guatemala, only to be caught near the US border and sent back under the Trump administration’s zero-tolerance policy.

US President Donald Trump tweeted in June that “illegal immigrants, no matter how bad they may be ... pour into and infest our Country, like MS-13.”

Yet very few gang members try to get into the US. In fiscal year 2017, the US Border Patrol carried out 310,531 detentions of people who were in the US illegally, but only 0.09 percent of them belonged to the gangs operating in Central America, according to US Customs and Border Protection statistics.

Instead, it’s often people fleeing gangs who are trying to get into the US.

In 2000, US border patrol agents caught 1.6 million immigrants on the southwest border. Of those immigrants, 98 percent were Mexican, and only about 29,000 came from other countries.

Contrast that with 2017, when nearly 163,000 immigrants from El Salvador, Guatemala and Honduras were caught on the border — and roughly 128,000 Mexicans.

“These are people who are, for the vast majority, fleeing violence,” said Kathy Bougher, an American researching the human toll of migration. “And they need safety.”

They are people like the woman who found herself in the immigration center for “returnees,” plunged once again into the nightmare of being back in one of the world’s most violent countries.

“I’m afraid,” she said as she waited to be processed for re-entry. A government official called the names of other returned migrants who were sitting in orange plastic chairs so their possessions in small mesh plastic bags could be returned to them.

Because of safety concerns, the woman spoke with The Associated Press only on condition she not be identified. Her long hair twisted into a bun, wearing tight jeans and a white T-shirt smudged across the stomach from the chains she wore on the deportation flight, she said she had no option but to return to her house.

She dreaded returning to a town where a cold-blooded gang exerts control, to a place where gang members routinely force young women into being sex slaves, and kill those who refuse.

Even suspicion of being loyal to a rival gang is a death sentence. Many victims of gangs are often buried in mass graves, never to be found.

One day last November, the woman’s 19-year-old daughter stepped out of their home. She was meeting a girlfriend, she said.

The woman said she went to the police and prosecutors, but they never followed up.

Four months later, her 15-year-old son told her he was going to the store. He too never returned, and the mother resolved to leave before she and her partner disappeared, as well.

But along the avenues are narrow streets leading into low-income neighborhoods of shacks with corrugated metal roofs, many built by refugees from the country’s 1980-1992 war. Those are places where young men who joined gangs in Los Angeles, or formed their own to protect themselves and their community of war refugees, took root after they were deported from the US back to El Salvador.

Today, youths loiter at these entrances with cell phones to send an alert if police or strangers enter. They’re called “posteros,” named after the cement utility poles, or posts, that are ubiquitous in San Salvador.

Even La Chacra, the neighborhood or “colonia” where the immigration center sits behind high stone walls, is controlled by Mara Salvatrucha.

MS-13, as the gang is also known, and the rival Barrio 18 gang have working-class neighborhoods divided up like a checkerboard. They extort money from those doing business in the neighborhoods. Those who refuse to pay are killed.

Uber driver Jose Antonio Avalos knows better than to drive into one of these colonias.

“I pick up a girl every morning in front of the colonia,” Avalos said, pointing at a narrow opening into a section of La Chacra as he drove by on a main road. “I can’t enter because they will ask for my ID card. If they see from your address that you’re from a part of the city of a rival gang, they’ll think you’re spying on them and could kill you. If you’re lucky, they’ll tell you to leave and warn you they’ll kill you the next time.”

The problem is so pervasive that a lawmaker recently asked El Salvador’s Legislative Assembly for national identity cards to be issued without addresses “to save lives.”

Fifteen years ago, the Salvadoran government began a crackdown on gangs, resulting in thousands of members being imprisoned. Yet they continued to proliferate, even running operations with cell phones from behind bars. El Salvador’s defense minister said in 2015 there were 60,000 gang members in the country, compared to a combined police and army strength of 50,000.

Members of those security forces contribute to the violence that is causing the northward migration. Police and soldiers, operating both officially and in some cases with clandestine “extermination groups,” are responsible for an estimated 10 to 15 percent of the threats and violence, according to non-governmental organizations. Mere suspicion of belonging to a gang is enough to bring trouble.

“Being young in a neighborhood is a crime,” said Armando De Paz of Cristosal, a rights group focusing on Central America.

In January, police stopped Henry Cubias, 22, as he cycled home one night from his job as a night-shift doorman at an arts facility. The police, some wearing hoods, took Cubias to a darkened area, jerked his head back by grabbing his long hair and told him they could make him disappear if he didn’t inform on gang activities, Cubias said in an interview. He had nothing to tell them because thus far, he’s managed to keep his distance from the gang that controls his neighborhood.

“I was afraid, because I was alone,” Cubias recalled of his encounter with the police. “I asked God to help me.”

Then, a lucky break. His aunt happened to walk by. She alerted Cubias’ parents. His father and his mother — who was sick with cancer and had only one month left to live — confronted the police, who let him go, Cubias said.

There are few options for those threatened by gangs. Moving to another town is usually only a short-term solution in El Salvador, which is smaller than the state of Massachusetts. Eventually, members of a gang are likely to ask the young person where they came from. It could be the same gang that controls the person’s former neighborhood or village. Or it could be the rival gang.

“This is a small country, and there isn’t anywhere to hide,” Bougher said.

It is estimated that 90 percent of people who were deported from the United States try to immigrate again within days, said Mauro Verzeletti, a Brazilian priest who runs the Pastoral Center for Migrants, which provides shelters for immigrants here and in Mexico.

The woman who was flown back Thursday said she didn’t know if she’d try it again. First, she needed to find out when her partner would be coming back. He was still detained in Texas.

She borrowed a mobile phone to call a friend to get a ride to her small brick house that she thought she had left forever, a house containing the memories of her missing children, in a town under the grip of a gang.

Asked who was waiting for her there, she looked bereft and answered weakly: “No one.”