CHEMNITZ, Germany (AP) — Thousands of people are expected to attend a concert Monday evening in the eastern German city of Chemnitz against far-right protests. 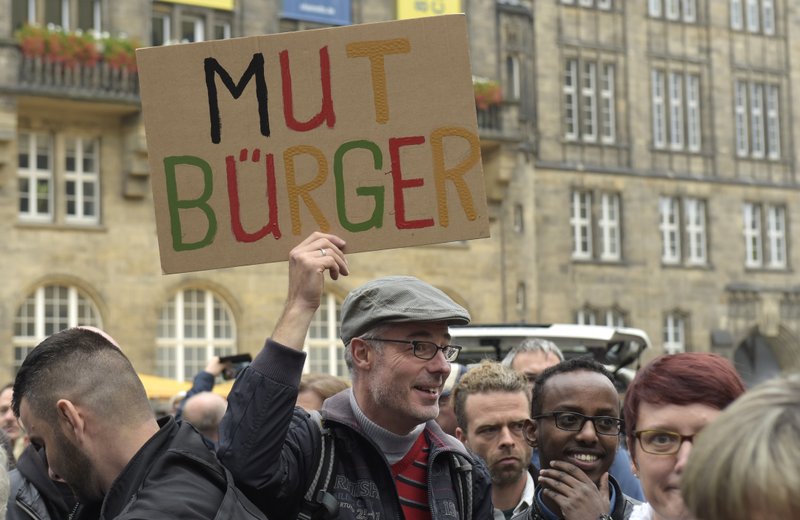 A man holds a poster reading ‘courage citizen’ during a demonstration for democracy and against extremism in Chemnitz, eastern Germany, Sunday, Sept. 2, 2018. A week earlier a 35-year-old man had been killed in a stabbing sparking various protests. (Photo: AP)

The performances, by some of Germany’s most popular bands, come in reaction to a week of sometimes violent rallies by far-right groups against migrants — and leftist counter protests.

The nationalists’ protests were triggered by the fatal stabbing of a 35-year-old German man in Chemnitz on Aug. 26, allegedly by two migrants from Iraq and Syria.

The tension that has built up over the past week in Chemnitz reflects the growing polarization over Germany’s ongoing efforts to come to terms with an influx of more than 1 million refugees and migrants to the country since 2015.

The concert, which is being promoted under the #WeAreMore hashtag, is part of an effort by German civil society to position itself against the growing far-right movement in parts of Germany.

Former Foreign Minister Sigmar Gabriel on Monday harshly criticized the political establishment for being too passive when it comes to fighting far-right groups in Germany and asked them to make a stronger showing in places with simmering discontent and anti-migrant sentiment.

“I think it would be good if as many representatives as possible — not only in Chemnitz but everywhere — go to places where we think the citizens are not agreeing with our state,” he said.

But, Gabriel added, there was a clear line between angry citizens and those inciting the people with hatred.

“We have to go with toughness after these terrorists,” he said in an interview with Bild Television adding that, “there won’t be any discussions with people who make the Hitler salute. There will only be the rigidity of the state.”

Gabriel’s comments followed Saturday’s demonstrations by about 4,500 far-right protesters in Chemnitz, who were rallying against migration. Around 4,000 leftist protesters also marched through the city in a counter-protest, and 1,800 police officers were deployed to keep the groups apart.

Scenes earlier that week of vigilantes chasing foreigners in the city’s streets and showing the Hitler salute have shocked people in others parts of Germany and beyond.

Gabriel also called on the domestic intelligence service to start watching the Alternative for Germany, or AfD, party, which was voted into national parliament last year.

In the past, the nationalist AfD has officially distanced itself from radical far-right groups, but over the weekend it joined ranks for the first time with the more radical Patriotic Europeans Against the Islamization of the West, or PEGIDA, and Pro Chemnitz group and marched through the city together with them.

Also on Monday, the widow of Chemnitz victim Daniel H., spoke out for the first time, saying that, “Daniel would have never wanted” the protests triggered by his killing. Their full names weren’t given, in line with German privacy laws.

“Daniel was neither left nor right,” widow Bianca T. said adding that she was shocked by how the far right was exploiting his death. “I looked at the events on Saturday night — this was not about Daniel at all.”

“All we want to do right now is mourn him in peace,” she said.