Thousands of people fled their homes in Vietnam Saturday as Typhoon Vamco barrelled towards central regions already pummelled by weeks of successive storms. 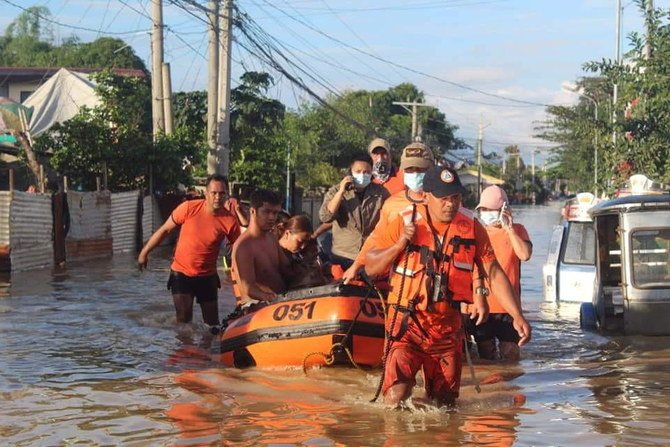 Airports have been shut, beaches closed and a fishing ban put in place, as the country braces for winds of up to 100 kilometres (60 miles) per hour when the typhoon makes landfall on Sunday, likely close to Hue.

Thousands of people have been evacuated from their homes in four central provinces, according to the disaster management authority, while state media said hundreds of thousands more may have to flee.

A series of storms have hit central Vietnam over the past six weeks, causing flooding and landslides that have killed at least 159 people, authorities said, while 70 others are missing.

The severe weather has also damaged or destroyed more than 400,000 homes, according to the International Federation of Red Cross and Red Crescent Societies.

Roads and bridges have been washed away, power supplies disrupted, and crucial food crops destroyed, leaving at least 150,000 people at immediate risk of food shortages, it added.

"Each time they start rebuilding their lives and livelihoods, they are pummeled by yet another storm."

Typhoon Vamco has already caused devastation in the Philippines.

Emergency response teams were dispatched to the northeast on Saturday where more than 340,000 people have been affected by severe flooding following Vamco that killed at least 33 people across the country, disaster agencies said.

Twenty of the deaths were recorded in the provinces of Cagayan, Isabela and Nueva Vizcaya, which have become the focus of rescue efforts.

Hundreds of people were trapped on rooftops in the hardest hit areas along the Cagayan river with rescuers unable to reach them due to the strong current, said the spokesman for the regional Office of Civil Defense.

Vast swathes of the region were under water in what officials have described as the worst flooding in living memory.

The release of water from Magat dam has exacerbated the impact.