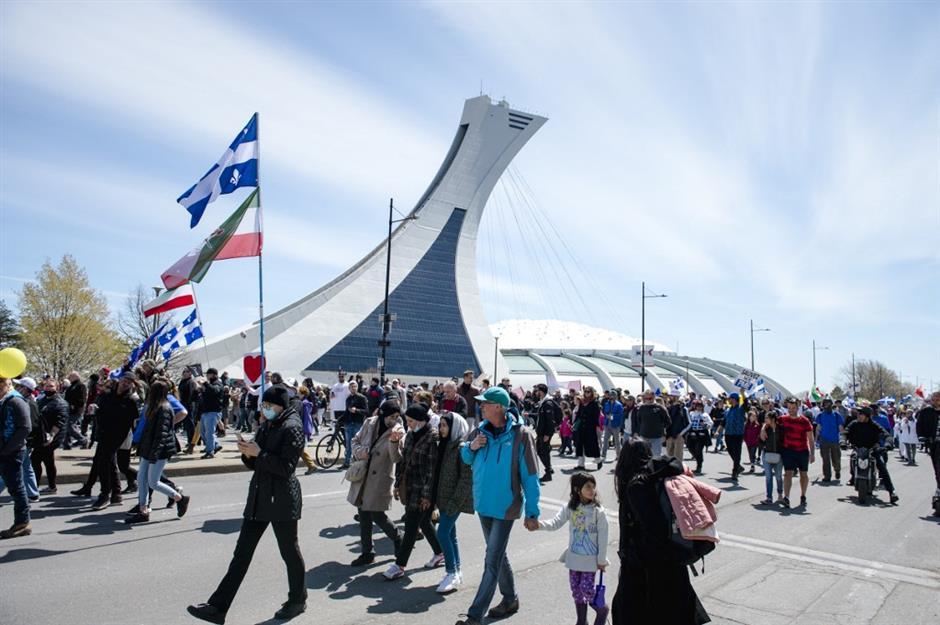 Demonstrators march past the Olympic Stadium in a protests against new COVID-19 anti-mask and anti-curfew restrictions, in Montreal on May 1, 2021. The new restrictions issues by the Canadian the government include the mandatory wearing of masks when gathering outside; a mandatory 20h00 curfew, which will moved to 21h30, on May 3, 2021; and restrictions on gatherings.

Tens of thousands of protesters marched Saturday at Montreal's Olympic Stadium, rallying against restrictions imposed by the government to stem a third wave of the coronavirus pandemic in Canada.

Some demonstrators were arrested at the start of the march, according to an AFP journalist, with signs in the crowd expressing opposition to masks, curfew and health passports.

A heavy police presence was on hand, although the event proceeded largely in a festive atmosphere to the rhythm of drums.

Police refused to provide a crowd estimate, but Canadian media said the turnout was about 30,000, making it the largest rally against COVID restrictions in Quebec in recent months.

They criticized compulsory mask-wearing for outdoor gatherings and a provincial curfew that was imposed at the beginning of January — a move not seen on a provincial scale in Canada since the Spanish flu outbreak a century ago.

Due to slowing rates of infection, the Quebec government said that starting Monday, the start of the curfew in Montreal would be pushed back to 9:30 pm, from 8 pm.

"We are simply asking for an end to the health measures," Daniel Pilon, who said he was an organizer of the event, told AFP.

"The irony here is that by gathering, people are putting each other at risk, spreading further cases of COVID-19, and extending the time in which we will have to be faced with restrictions and public health measures," he said.

Montreal's Olympic Stadium is one of the country's biggest vaccination sites, and had to be shut down on Saturday due to the demonstration.

Canada has recorded more than 1.2 million cases of coronavirus and 24,200 deaths, more than half of them in Ontario and Quebec.