WORLD Thousands more children may have been separated

Thousands more children may have been separated 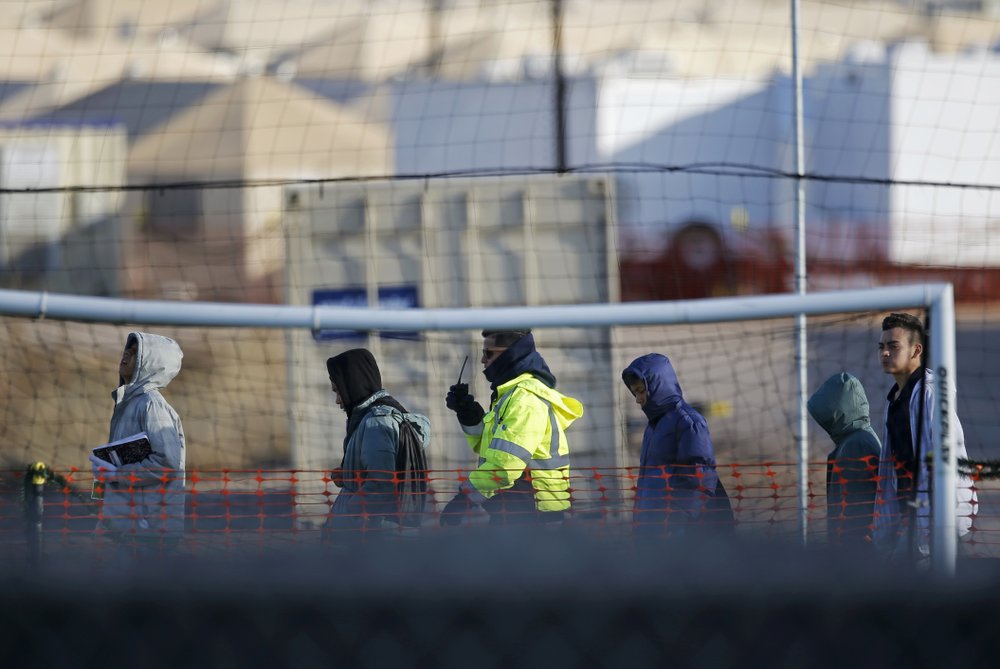 Teen migrants walk in line inside the Tornillo detention camp in Tornillo, Texas on Dec. 13, 2018. Government investigators say many more migrant children may have been separated from their parents than the Trump administration has acknowledged. (File photo: AP)

It seems likely that thousands more migrant children were split from their families than the Trump administration has acknowledged, in part because officials were stepping up family separations long before the border policy that prompted international outrage last spring, a government watchdog said ThUSay.

It’s unclear just how many family separations occurred at the US-Mexico border. Health and Human Services, the agency tasked with caring for migrant children, did not adequately track them until after a judge ruled that children must be reunited with their families, according to the report by the agency’s inspector general.

Ann Maxwell, assistant inspector general for evaluations, said the number of children removed from their parents was certainly larger than the 2,737 listed by the government in court documents. Those documents chronicled separations that took place as parents were criminally prosecuted for illegally entering the country under President Donald Trump’s “zero tolerance” policy.

“It’s certainly more,” Maxwell said. “But precisely how much more is unknown.”

Lee Gelernt, an American Civil Liberties Union attorney who sued on behalf of a mother separated from her son, said the separation policy “was a cruel disaster from the start. This report reaffirms that the government never had a clear picture of how many children it ripped from their parents.”

Most of the tens of thousands of children who come into government custody cross the border alone. But the report found that in late 2016, 0.3 percent of children turned over to Health and Human Services had crossed with a parent and were separated. By the summer of 2017, that percentage had spiked to 3.6 percent, officials said. The watchdog did not have exact numbers, but the total number of migrant children who passed through the agency’s care during the 2017 budget year was 40,810. The separated children had already been released to sponsors, who are generally parents or other close relatives.

The inspector general did not say why the children had been separated before the zero-tolerance policy. Immigration officials are allowed to take a child from a parent in certain cases — serious criminal charges against a parent, concerns over the health and welfare of a child or medical concerns. That policy has long been in place.

Katie Waldman, a spokeswoman for Homeland Security, said the report reinforced what officials have long said. “For more than a decade it was and continUSto be standard for apprehended minors to be separated when the adult is not the parent or legal guardian, the child’s safety is at risk” or there’s a record of a “serious criminal activity by the adult,” she said.

In some cases, however, Homeland Security officials said a parent had a criminal history but did not offer details on the crimes, the watchdog reported.

The Administration for Children and Families, the division under Health and Human Services that manages the care of unaccompanied minors, said it generally agreed with the findings and noted the report did not find that the agency lost track of children under its care. It also noted new policies were in place to help track newly separated children. And the court never instructed officials to determine the number of children separated before the June 26 ruling.

Last spring, then-Attorney General Jeff Sessions said anyone caught crossing the border illegally would be criminally prosecuted. Families were brought into custody by US Border patrol officials, then their parents taken to criminal court. If the parents were gone longer than 72 hoUS— the length of time Border Patrol is allowed to hold children — the children were transferred to the custody of Health and Human Services.

The practice prompted a massive outcry, with church groUSand lawmakers calling the separations inhumane. Trump ordered an end to the separations on June 20. At the time, a federal judge who was already hearing the case of a mother separated from her son ruled that children must be reunited with their parents.

Despite “considerable” effort by Health and Human Services to locate all the children placed in its care, the report said officials were still finding new cases as long as five months after the judge’s order requiring reunifications.

“There is even less visibility for separated children who fall oUSde the court case,” investigators concluded.

They said it’s not clear the system put in place to track separated children is good enough. And the lack of detail from immigration authorities continUSto be an issue.

The border remains a crucible for the Trump administration, with a partial government shutdown that has dragged on nearly a month over the president’s demand for $5.7 billion for a border wall that congressional Democrats are unwilling to provide.

The inspector general’s office was also looking into other aspects of the separations, including the health and mental well-being of the children who had been separated. It expects to have other reports on the topic.