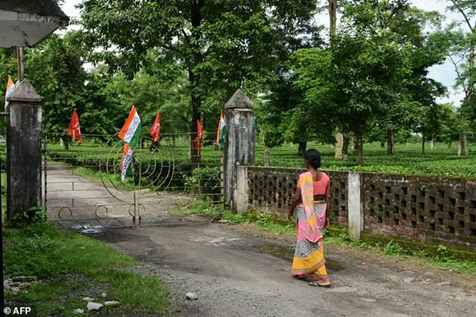 The strike in the Himalayan foothills of West Bengal state has stopped work at most tea estates in the region. (Photo: AFP)

Hundreds of thousands of tea plantation workers in eastern India went on a three-day strike Tuesday demanding a 50 cent increase in their daily wage from the government and estate owners.

The strike in the Himalayan foothills of West Bengal state, close to the picturesque Darjeeling hill station, stopped work at most tea estates in the region.

"More than 400,000 workers from around 370 tea gardens are participating in the three-day strike," Aloke Chakraborty, president of the central committee of united union of plantation workers, told AFP.

The striking workers have so far not disrupted work at the Darjeeling plantations, famed for their eponymous tea which is exported across the world.

Media reports said the strike was being supported by around two dozen local labour unions.

The unions hope to exert maximum pressure as disruption of work around the ongoing Indian monsoon -- when production peaks -- means bigger financial losses for the owners.

"We are sympathetic to the issue and are trying to find a solution to the long-standing demand of raising the minimum wages of tea workers," regional minister Gautam Dev told journalists.

A vestige of British-ruled India, the tea plantations in parts of eastern and northeastern India often make national headlines over wage disputes and poor working conditions for the workers.