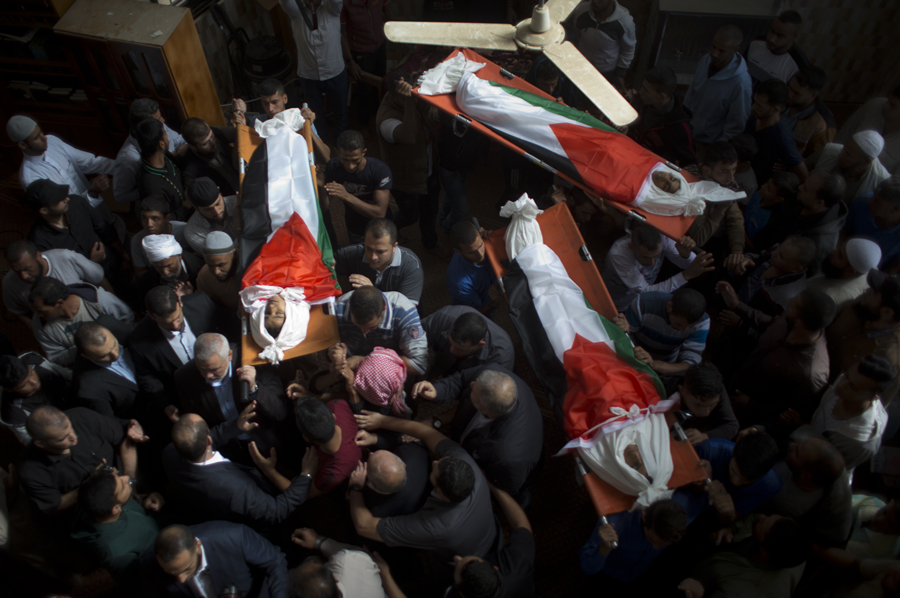 GAZA, Oct. 29 (Xinhua) -- Thousands of outraged mourners buried on Monday three Palestinian children who were killed on Sunday night in an Israeli airstrike on the border area between eastern Khan Younis town in southern Gaza Strip and Israel.

The mourners took the bodies of the three children from al-Aqsa Hospital in the town of Deir el-Ballah, carried their bodies on their shoulders amid chanting of Allaho Akbar (God is Great).

Ibrahim al-Satari, 45 years old, father of Mohamed al-Satari, said with grief that the last ever thing he expected is to hear that his 13-year-old kid gets killed by a missile fired from a warplane.

"This shows how brutal the Israeli army is and shows that this army has no morality, because armies of countries don't kill children," said the father as he stood near the body of his son for a last glance together with his wife and four children as well as relatives and neighbors.

Abdul Aziz Abu Dhaher, father of Abdul Hamid Abu Dhaher, said he has a brother and a sister who were killed in the first Israeli war waged on Gaza in 2009, adding "today my son is getting killed."

The mourners took the bodies of the three children to their homes for the last goodbye and then carried them to the mosque for prayers before they were taken to the central Gaza Strip graveyard for burial.

Ismail Haniyeh, chief of Hamas, Ahmad Bahar, deputy speaker of the Palestinian Legislative Council (PLC), members of the PLC and thousands of people joined the funeral.

"This crime is not strange for the occupation to commit it, because it is the nature of this occupation to kill children and women," Bahar told the mourners," adding "the three children were killed in a cold blood before the eyes and ears of the entire world."

Bahar, who is also a senior Hamas leader, held Israel responsible for killing the three children and all the Palestinians in the marches of return which started in March 30.