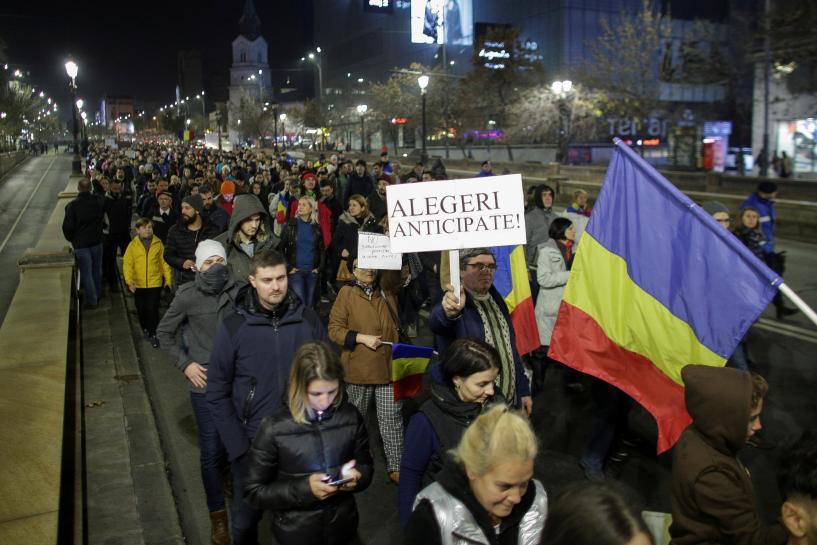 Tens of thousands of Romanians rallied in the capital Bucharest and dozens of other cities on Sunday, protesting against a widely criticized plan by the ruling Social Democrats to overhaul the judiciary.

The PSD-led coalition, which holds a robust majority in parliament, is drafting an overhaul that the European Commission, foreign diplomats and thousands of magistrates have criticized as placing the justice system under political control, potentially weakening an anti-corruption drive.

A special parliamentary commission started debating the bill last week, with the ruling party aiming to have it approved by the end of the year.

The commission is headed by Florin Iordache, who resigned as justice minister in February after a decree on corruption that he drafted triggered the biggest street protests since the 1989 anti-communist Romanian revolution.

That decree, which was eventually rescinded, would have effectively shielded dozens of public officials from prosecution for corruption.

“Thieves, Thieves,” shouted thousands of protesters in front of the government’s headquarters on Sunday. “We want justice, not corruption. PSD is the red plague.”

An estimated 30,000 people marched to parliament in Bucharest, while roughly 20,000 held rallies in about 70 cities.

“How do you trust wolves to make laws at the sheepfold,” former technocrat prime minister Dacian Ciolos said on his Facebook page before going to the protests in Bucharest.

The most contested judicial changes include those to an inspection unit that oversees magistrates’ conduct, the way in which chief prosecutors are appointed and the president’s right to veto candidates.

Romanian prosecutors have investigated hundreds of public officials, including former prime ministers, in an anti-corruption drive over the past decade.

Transparency International ranks Romania among the European Union’s most corrupt states, though Brussels has praised magistrates for their efforts.

Prosecutors froze personal assets belonging to the leader of the PSD, Liviu Dragnea, this month as part of an investigation into suspected theft of cash from state projects, some of them Brussels-funded.

Dragnea has denied any wrongdoing.

In a report published on Nov. 15, the European Commission said that justice reform has stagnated in Romania this year and challenges to judicial independence remain a persistent source of concern.