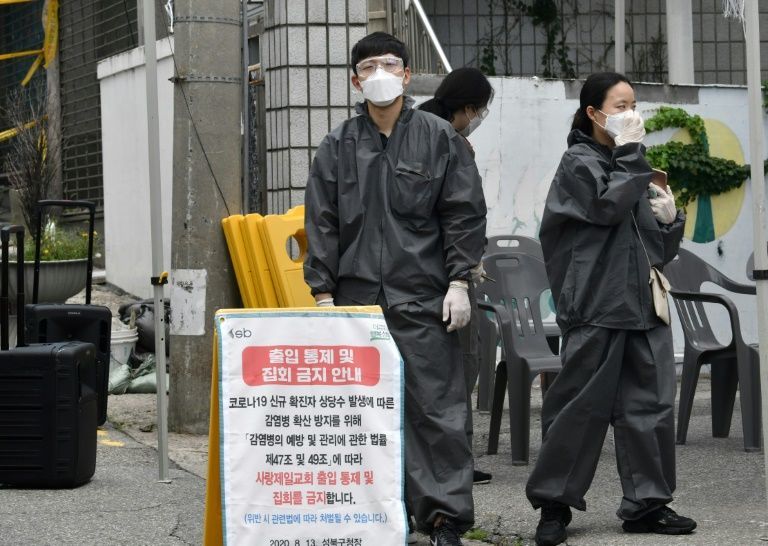 Thousands of members of a Protestant church linked to a coronavirus cluster in Seoul have been asked to quarantine, South Korean authorities said Monday, as they accused the group's firebrand conservative leader – who has reportedly tested positive – of obstruction.

The country's "trace, test and treat" approach has been held up as a global model in how to curb the virus, but it is now battling several clusters linked to religious groups.

Over the weekend the capital and neighboring Gyeonggi province – between them home to nearly half the population – banned all religious gatherings and urged residents to avoid unnecessary travel after a burst of new cases sparked fears of a major second wave.

South Korea reported 197 new infections on Monday, taking its total to 15,515, its fourth consecutive day of triple-digit increases after several weeks with numbers generally in the 30s and 40s.

The largest current cluster is centered on the Sarang Jeil Church in Seoul, headed by Jun Kwang-hun, a controversial conservative pastor who is a leading figure in protests against President Moon Jae-in.

Cases traced to Sarang Jeil Church in the northern ward of Seongbuk reached 319 as of Monday noon local time, up 70 cases from the previous day, according to the country's Central Disease Control Headquarters, and around 3,400 members of the congregation had been asked to quarantine.

Despite repeated warnings from the government, over 10,000 members of the church, one of which was led by conservative pastor Jun Kwang-hoon and other members of Sarang Jeil Church in Seoul, attended a mass Liberation Day rally in central Seoul on Saturday.

"Of the 4,000 churchgoers whom authorities have identified as of midnight, 3,400 have been placed in quarantine and 2,000 have been screened. Of the total, 312 have tested positive, which translates to a high positive rate of 16.1 percent and calls for swift testing and quarantine," the Vice Health Minister Kim Ganglip said in a regular press briefing.

Around one in six of the church members tested so far had been positive, "requiring rapid testing and isolation," said vice health minister Kim Gang-lip.

But a list of members provided by the church was "inaccurate", he said, making the testing and isolation procedure "very difficult".

Another Christian sect, Shincheonji Church of Jesus, was at the center of the country's largest outbreak of COVID-19 infections in February. More than 5,000 of the church's member were infected by COVID-19, which makes up 36 percent of South Korea's total cases.

The situation amounted to an "early stage of a large-scale outbreak", said Jung Eun-kyeong, director of the Korea Centers for Disease Control and Prevention.

"If the outbreak is not controlled right now, the number of confirmed cases will increase exponentially, leading to collapse of the medical system and enormous economic damage," she said.