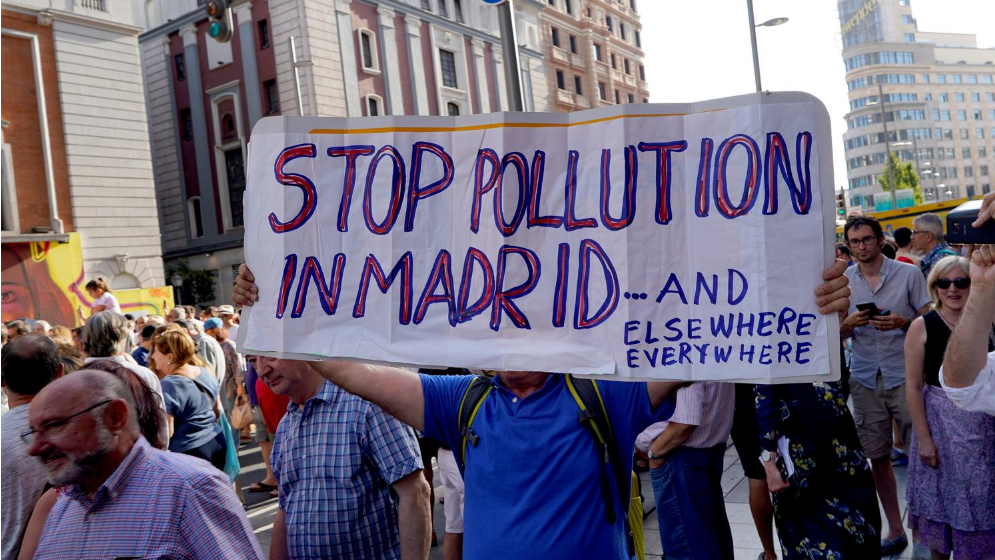 Braving the scorching heat, thousands of people swarmed the streets of Madrid on Saturday, protesting against the rollback of curbs on polluting cars.

The public outcry comes after the newly elected mayor, José Luis Martínez-Almeida, shelved the ban on petrol and diesel run cars from entering central areas of Madrid, raising fears of intense air pollution in the city in coming months.

Last year, the government implemented a policy called ‘Madrid Central’ which restricted vehicular traffic in the city. The policy aimed at reducing the high levels of nitrogen dioxide emitted from petrol and diesel run cars, to comply with the European Union (EU) air quality rules.

According to Madrid Air Quality Plan (2011-2015), vehicular traffic was found to be responsible for nearly 50 percent of all nitrogen dioxide emissions in the city. Diesel vehicles were a significant contributor, it said.

In 2105, the European Environment Agency (EEA) reported more than 38,600 premature deaths in Spain due to worsening air pollution. Alarmed at the consequences of the pollution, the EU also reprimanded city officials for not doing enough to control air pollution.

Fearing a spike in the air pollution after the suspension of the Madrid Central ruling, residents took to the street with banners that read “Fewer cars, better air,” or “the new city hall seriously harms your health” to oppose the new mayor’s decision, AFP reported.

“Madrid Central is a measure to improve the quality of the air we breathe and, therefore, cannot be politicized,” said Greenpeace Mobility Officer, Adrián Fernández. The decision would have a severe impact on people’s health, Fernández added.

In November, in a bid to control the deteriorating air quality, Madrid decided to follow the footsteps of leading European cities including London, Milan and Stockholm, by restricting traffic in its central areas. The city banned entry of fossil-fuel run car to enter its central area.

But the Madrid Central rules were comparatively stricter; other cities allowed drivers to pay to enter the restricted zone. Madrid had no such provision. Instead, it imposed fines on drivers entering such zones.

The new order effective from July 1 will allow cars to enter the restricted areas without paying any fines.

During his election campaigns, José Luis Martínez-Almeida criticized the Madrid Central policy by saying, the rule has resulted in chaos and has done little to curb air pollution. Scrapping the plan was one of the prominent agendas during the election.