Thousands marched to the US Supreme Court in Washington on Saturday to commemorate the late Justice Ruth Bader Ginsburg and protest President Donald Trump's rush to push through Amy Coney Barrett as her replacement. 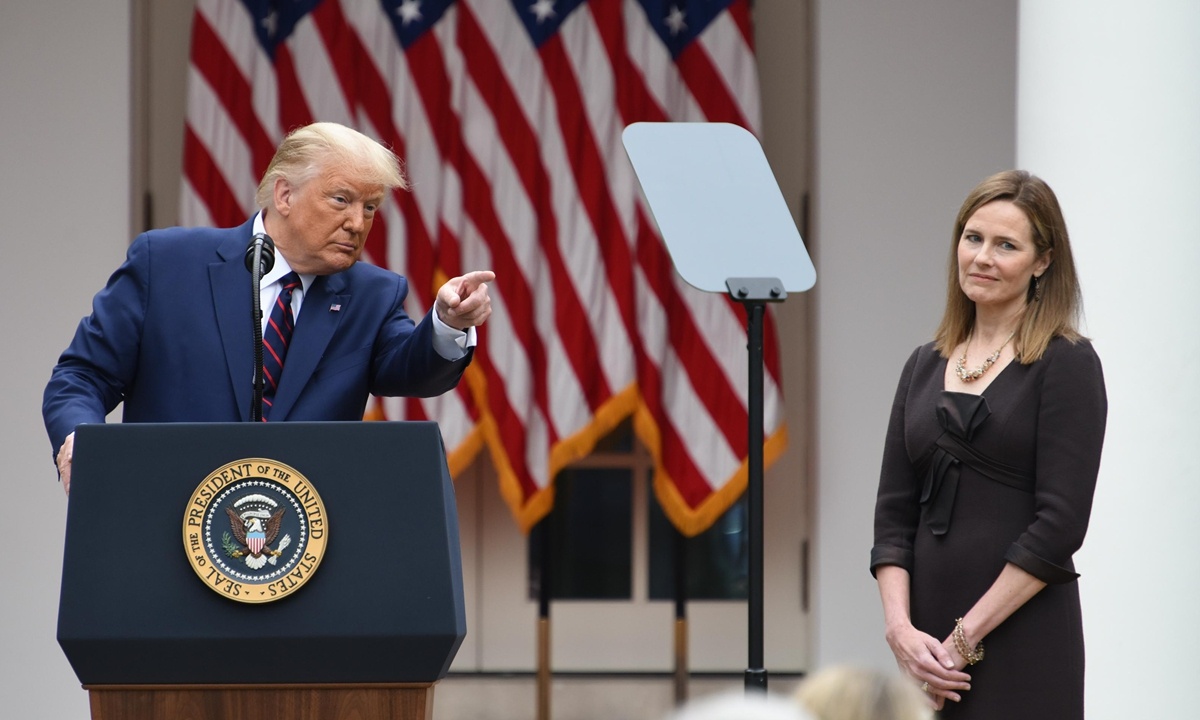 US President Donald Trump announces his US Supreme Court nominee, Judge Amy Coney Barrett (right), in the Rose Garden of the White House in Washington, DC, on Saturday US time. Barrett, if confirmed by the US Senate, will replace Justice Ruth Bader Ginsburg, who passed away on September 18. Photo: VCG

The US Senate Judiciary Committee has scheduled a Thursday vote on the nomination of Barrett, a conservative appellate judge, over objections from Democrats that the confirmation process comes too close to the November 3 presidential election.

More than 26 million Americans have already cast their ballots for who they want to sit in the White House for the next four years, Trump or his Democratic rival Joe Biden.

Demonstrators at the Women's March said they were angry that Republicans appear ready to confirm Barrett's nomination so close to Election Day after refusing to move forward Merrick Garland, the pick of former president Barack Obama, a Democrat, more than six months ahead of the 2016 election.

"The fact of the matter is that we are powerful and they are afraid," said Sonja Spoo, the director of the reproductive rights campaigns at UltraViolet, a feminist advocacy group, one of the speakers at the protest. "They are on the ropes and they know it and we are about to give the knock-out punch."

Ginsburg, a liberal champion of women's rights, died on September 18.

Prudence Sullivan, 49, from Lake in the Hills, Illinois, near Chicago, and her sister Kelli Padgett, 47, from Jacksonville, Florida, flew in to join what they described as an energizing and empowering event.

"We've had losses from COVID[-19] and we've clashed with family members over racism, Black Lives Matter," Sullivan said. "So this is something where I can put my money where my mouth is."

Sullivan said she and her husband, an IT expert, were looking at options for moving overseas if Trump was reelected.

The protesters marched through downtown Washington to the Supreme Court steps.

Hundreds of marches and demonstrations were planned at city halls, parks and monuments across the country.

In confirmation hearings this week, Barrett side-stepped questions about presidential powers, abortion, climate change, voting rights and Obamacare, saying she could not answer because cases involving these matters could come before the court.

If Barrett takes a seat on the Supreme Court, conservatives would have a 6-3 majority.