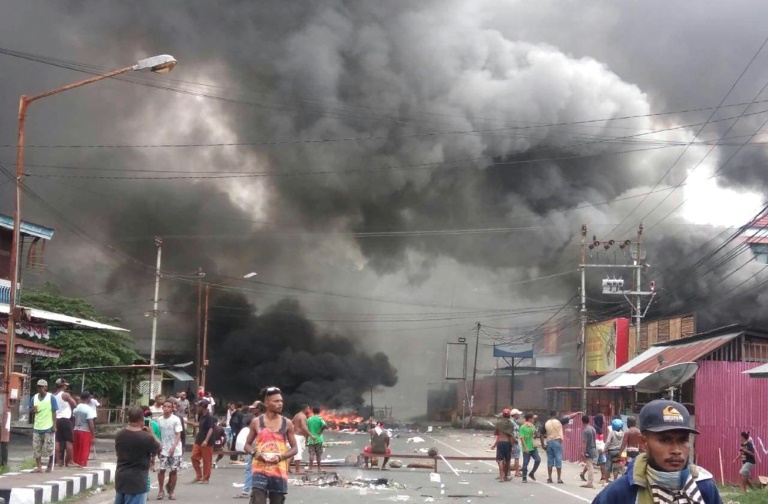 Protesters in Manokwari, Papua, have set fire to shops and vehicles, knocked down street signs, and thrown rocks at government buildings. (Photo: AFP)

Riots broke out and a local parliament building was torched in Indonesia's restive Papua region on Monday, as thousands protested against the weekend detention of dozens of Papuan students.

Demonstrators took to the streets of Manokwari, the capital of West Papua province, bringing the city of some 130,000 to a standstill as its civic building was nearly reduced to ashes.

Some protesters set fire to shops and vehicles, knocked down street signs, and threw rocks at government buildings, according to an AFP reporter at the scene, who estimated several thousand demonstrators were present.

Indonesia's security minister Wiranto, who goes by one name, appealed for calm and said there would be an investigation of the incident that triggered the unrest in Manokwari as well as protests in several other Papuan cities on Monday.

"This has clearly disrupted our unity as a nation," he said.

The riots marked the latest flashpoint in a region hit by a decades-old insurgency against Indonesian rule and allegations that its security forces committed widespread rights abuses against its ethnic Melanesian population.

A former Dutch colony, it declared itself independent in the early Sixties, but neighbouring Indonesia took control of the resource-rich region following a UN-sponsored independence referendum that was widely viewed as a sham.

In Manokwari, three police officers were injured by rock-throwing protesters, authorities said. It was not immediately clear if any demonstrators were injured. Local schools were shut for the day.

Local media and Papuan activists said police in riot gear stormed into a dormitory to force out students who allegedly destroyed an Indonesian flag.

Police said the students were briefly questioned and set free.

Television footage on Saturday also showed a different group of protesters demonstrating against the students and shouting racial slurs about Papuans.

The unrest comes after two Indonesian security personnel were killed over the past month in clashes with separatist rebels.

Last year, the National Liberation Army of West Papua, part of a grouping of rebels fighting for Papuan independence, killed at least 19 construction workers at a remote jungle camp in Papua.

The employees of a state-owned contractor had been building bridges and roads as part of efforts to boost infrastructure in the impoverished region.