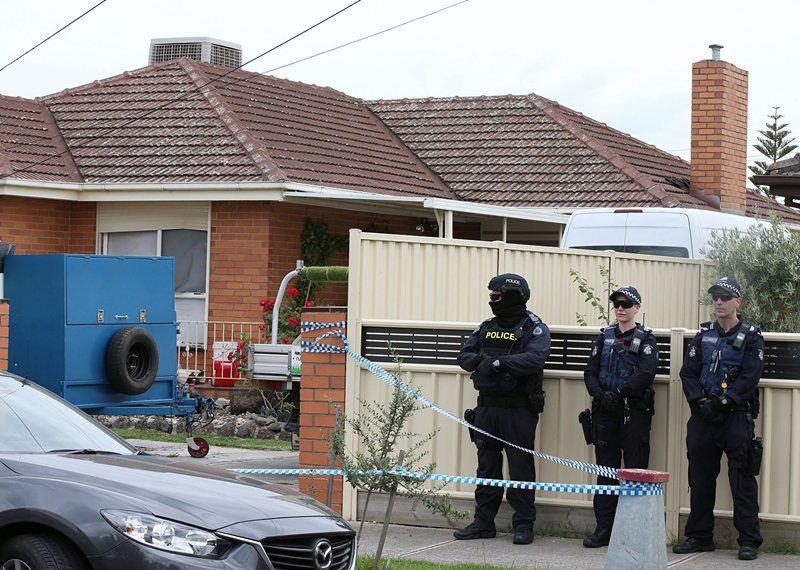 Police are seen outside one of the houses involved in counter-terrorism raids across the north-western suburbs in Melbourne, Australia, November 20, 2018. (File photo: VCG)

The trio, all Australian nationals of Turkish descent, were detained by counter-terror police in overnight raids as they escalated preparations to attack crowded areas of Melbourne, according to police.

The three, two brothers aged 31 and 26 and 21-year-old, were later charged with planning a terrorist action, which carries a maximum penalty of life in prison, officials said.

Victoria Police Chief Commissioner Graham Ashton said the men were "certainly inspired by ISIS", the Islamic State group, but had no known links to a specific organisation.

They had been under investigation since March but had become "more energised" since the IS-inspired stabbing attack in Melbourne on November 9, he said.

The men had sought to purchase semi-automatic .22 calibre rifles and police were concerned they could target upcoming Christmas season events that will see huge crowds gathering in the city.

"There was a view towards a crowded place, a place where maximum people would be attending, to be able to kill, we allege, as maximum an amount of people as possible," Ashton told reporters.

The group had not yet picked a specific target or time for the attack, and Ashton added that police were confident Tuesday's arrests had "neutralised any threat to the... community from this group".

In the November 9 attack, a Somali-born Australian, Hassan Khalif Shire Ali, stabbed and killed one man and wounded two others in a central shopping area before being shot dead by police.

Coincidentally, the victim of that attack, Sisto Malaspina, 74, was honoured by a state funeral in Melbourne on Tuesday.

Hundreds of Melbournians and dignitaries attended a service at Melbourne's St Patrick's Cathedral to bid farewell to Malaspina, the beloved owner of a local Italian cafe and a well-known figure on the city's vibrant restaurant scene.

The three arrested men were identified by local media as Ertunc and Samed Eriklioglu, aged 30 and 26 respectively, and Hanifi Halis, 21. Court officials could not immediately confirm their identities.

"If we had not acted early in preventing this attack, we'll allege the consequences would have been chilling, with... a potential significant loss of human life," said Ian Mccartney, a federal counter-terror police spokesman, in announcing the arrests.

Australian police have charged 90 people in relation to 40 counter-terrorism investigations since 2014, when the country's terror alert level was raised to "probable".

Melbourne has been the target for a number of attacks and plots.

In addition to the November 9 knife rampage, a 28-year-old man was convicted on six counts of murder last week for mowing down dozens of people in the same street in January 2017, and Shire Ali's brother is in jail awaiting trial for a plot to cause mass casualties last New Year's in the city's Federation Square.

Shire Ali, like the three men arrested Tuesday, had his passport cancelled to keep him from joining ISIS in the Mideast, and Ashton said this may have led to their actions at home.

"Unfortunately, the ISIS propaganda machine and that of al-Qaeda promotes this type of activity so when people are prevented from travelling or it's difficult to get to the conflict zone, often the view will be to change tack and commit an act in the country in which they live," he said.

Police said the probe which led to Tuesday's arrests had been complicated by the suspects' use of encrypted messaging applications, prompting the government to renew calls for urgent action on controversial legislation that would allow authorities to break the encryption.

Home Affairs Minister Peter Dutton said nine out of 10 of the high priority intelligence investigations currently underway were being undermined by suspects' use of encrypted messaging.

"That's an unacceptable risk in this environment," he said.