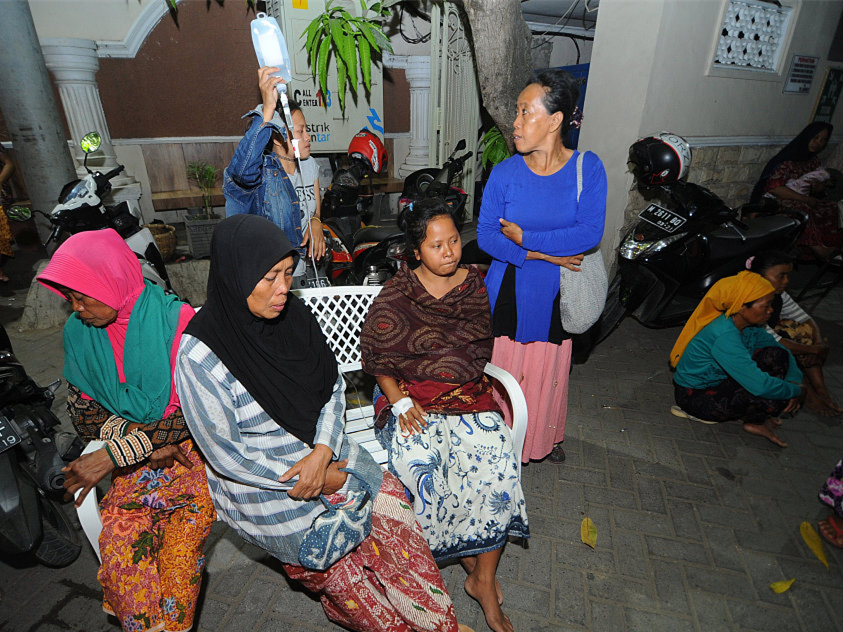 An earthquake Thursday killed three people in Indonesia and rattled hotels where IMF delegates are attending a major summit, a fortnight after a quake-tsunami killed more than 2,000 elsewhere in the archipelago. (Photo: VCG)

The 6.0-magnitude earthquake struck off the coast of Indonesia's Bali and Java islands in the early hours, jolting residents awake and sending them rushing into the streets.

Some attendees in Bali for the International Monetary Fund and World Bank annual meetings this week evacuated their hotels as the quake shook the island.

"I felt the quake for at least 30 seconds and I panicked. At first I didn't want to go out but then I decided to leave," Katharina Sudiyono, an Indonesian attendee at the summit, told AFP.

"Many summit participants woke up and asked questions, but we immediately sent out information to them that there had been an earthquake and the impact in Nusa Dua," he told AFP.

There were no immediate reports of damage or injuries in Bali and the summit proceeded Thursday uninterrupted.

"We send our condolences to those affected by the earthquake. Here in Bali, the earthquake has not caused significant damage nor any disruption to the meetings," an IMF spokesman said.

The conference centre was designed to withstand seismic events, and participants had been told to remain there in the event of a quake.

In case of tsunami risk, attendees would be evacuated to a nearby building.

Holidayers in the island's popular tourist districts also rushed into the streets as buildings swayed.

"Wow, that was really strong and it lasted a long time," said one woman who took refuge in a hotel parking lot in Nusa Dua, a few kilometres from where the IMF and World Bank are holding their meetings.

"The quake was very big. I immediately woke up and took my little kids out of the house," Ni Komang Sudiani told AFP.

"All my neighbours were also running, said the mother of two.

Dwikorita Karnawati, the head of Indonesia's geophysics agency who was also in Nusa Dua for the IMF summit, said no tsunami warning was issued.

"I felt the quake too," she told AFP. "We are also still gathering data from our team in East Java.'

In East Java, three people were crushed to death in their sleep when the quake brought down buildings in Sumenep district and sent people fleeing their homes.

"Everybody panicked and the entire village ran outside. We have never experienced an earthquake as strong as last night," Zainurrohman, a 21-year-old from the district told AFP.

"We stayed outside until dawn," he said. Many Indonesians go by one name.

The tremor's epicentre was in the Bali Sea around 40 kilometres (25 miles) off the eastern end of Java island, according to the United States Geological Survey.

The tremor comes after a 7.5-magnitude quake and subsequent tsunami struck off the Indonesian island of Sulawesi last month -- around 1,000 kilometres northeast of the latest quake's epicentre -- killing more than 2,000 people.

Thousands more remain missing since the twin disaster ravaged the city of Palu and surrounding areas. The search for the dead is expected to end Thursday.

A string of earthquakes in Lombok in eastern Indonesia killed more than 550 people over the summer.

Indonesia, one of the most disaster-prone nations on earth, straddles the so-called Pacific "Ring of Fire", where tectonic plates collide and many of the world's volcanic eruptions and earthquakes occur.