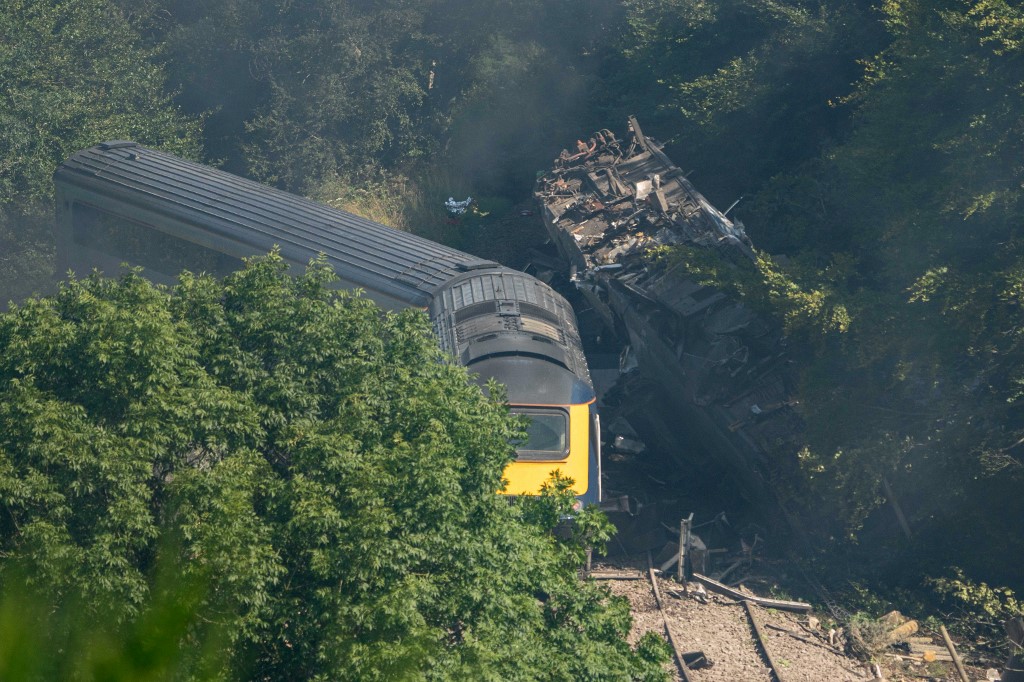 Derailed carriages are seen at the scene of a train crash near Stonehaven in northeast Scotland on August 12, 2020. (Photo: AFP)

The crash occurred in the morning close to the town of Stonehaven, around 25 kilometres (15 miles) south of Aberdeen. Smoke could be seen rising from the scene in pictures broadcast on television news channels.

"Very sadly despite the best efforts of paramedics, we can confirm that three people have been pronounced dead at the scene," British Transport Police said in a statement.

The driver is believed to be one of the fatalities, according to police, with six other people hospitalised, although none of their injuries are thought to be serious.

The Rail, Maritime and Transport (RMT) union also told the domestic Press Association agency that the train conductor was another victim.

Union TSSA said the train was the 06:38 (05:38 GMT) service travelling from Aberdeen to Glasgow.

Scotland's First Minister Nicola Sturgeon initially told the Scottish Parliament that there were "early reports of serious injuries" after noting on Twitter the crash was "an extremely serious incident."

Sturgeon said it occurred in an area where it was difficult for emergency services to access.

Some 30 emergency vehicles were attending the scene of the derailment which happened at 9:40am (08:40 GMT).

British Prime Minister Boris Johnson said: "I am saddened to learn of the very serious incident in Aberdeenshire and my thoughts are with all of those affected. My thanks to the emergency services at the scene."

Photos posted on social media by local authorities showed heavy flooding in the nearby town of Stonehaven early Wednesday.

Network Rail Scotland, the company which looks after the rail infrastructure, said it was working alongside emergency services.

"It is too early to confirm the exact nature and severity of the incident and more details will be made available once known," it said.

Moments after the emergency services had been notified of the accident, Network Rail reported there had been a landslip close by.

The local arm of Britain's National Health Service said it was setting up "major incident support" in Aberdeen for relatives and friends of anyone involved in the incident.

The BBC reported that one casualty was airlifted by helicopter to a nearby hospital.

Local MP Andrew Bowie said a "major emergency service response" was underway and he had spoken to the British transport minister, Grant Shapps, about the incident.

Shapps added on Twitter that he was in touch with Network Rail and other agencies and vowed "the UK Government will provide every support".

Britain's last major rail derailment was in 2007 in Cumbria, in northwest England, when a train on the main west coast line left the tracks, killing one passenger and seriously injuring 30 others.