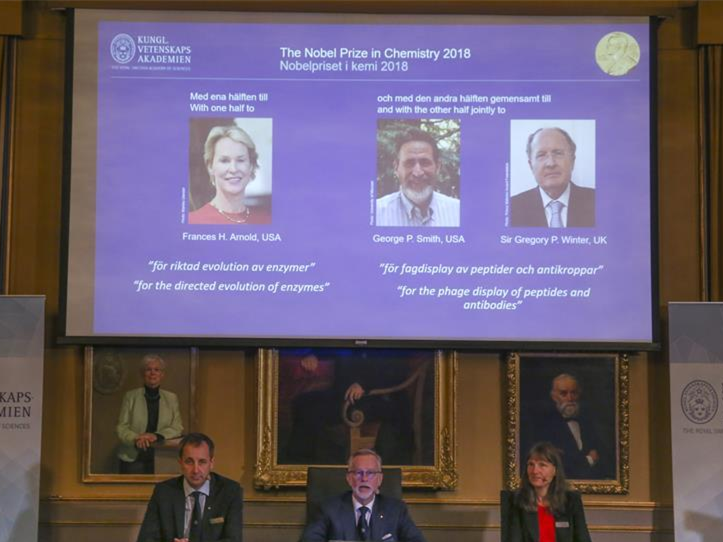 Photo taken on Oct. 3, 2018 shows a screen displaying the portraits of awarded scientists Frances H. Arnold of the United States (L), George P. Smith of the United States (C) and Sir Gregory P. Winter of the UK (R) for the 2018 Nobel Prize in Chemistry during a press conference at the Royal Swedish Academy of Sciences in Stockholm, Sweden. (Photo: Xinhua)

STOCKHOLM, Oct. 3 (Xinhua) -- The 2018 Nobel Prize in Chemistry has been awarded to three scientists who have taken control of evolution and used the same principles to develop proteins that solve humankind's chemical problems, the Royal Swedish Academy of Sciences announced Wednesday.

The Academy has decided to divide the prize with one half given to Frances H. Arnold, "for the directed evolution of enzymes", and the other half jointly to George P. Smith and Sir Gregory P. Winter, "for the phage display of peptides and antibodies".

Woken up to the news, Arnold said in a telephone interview at the press conference that she did "not quite yet have a coffee in the middle of the night". Unfortunately she was unable to finish her answers due to poor phone signals during the press conference.

Goran Hansson, secretary general of the Royal Swedish Academy of Sciences, told reporters during the press conference that all laureates were "very happy and enthusiastic" on receiving the prize, they "are happy to share the Prize" and that they "are looking forward to come to Stockholm" in December to receive the prize.

The power of evolution is revealed through the diversity of life. The 2018 Nobel Laureates in Chemistry have taken control of evolution and used it for purposes that bring the greatest benefit to humankind. Enzymes produced through directed evolution are used to manufacture everything from biofuels to pharmaceuticals. Antibodies evolved using a method called phage display can combat autoimmune diseases and in some cases cure metastatic cancer, according to a statement released by The Royal Swedish Academy of Sciences.

Smith developed a method known as phage display, where a bacteriophage -- a virus that infects bacteria -- can be used to evolve new proteins.

"What they have achieved are already having a huge impact on human society. For example, dish washer detergents, and many other consumer products we use daily, are manufactured by Arnold's discovery on enzymes. And we are only seeing the beginning of the pharmaceutical that come out of the technology, developed by Smith and Winter -- more that 11 of the 15 most sold pharmaceuticals today are based on that technology, developed by Smith and Winter. " Peter Somfai, member of the Chemistry Class,the Royal Swedish Academy of Sciences, told Xinhua in an exclusive interview after the press conference.

This year's prize is 9 million Swedish krona (about $1 million), with one half to Frances H. Arnold and the other half jointly shared by George P. Smith and Sir Gregory P. Winter.