Three junior British ministers quit Monday over Brexit, defying Prime Minister Theresa May to support a plan to give MPs a bigger say over leaving the EU. 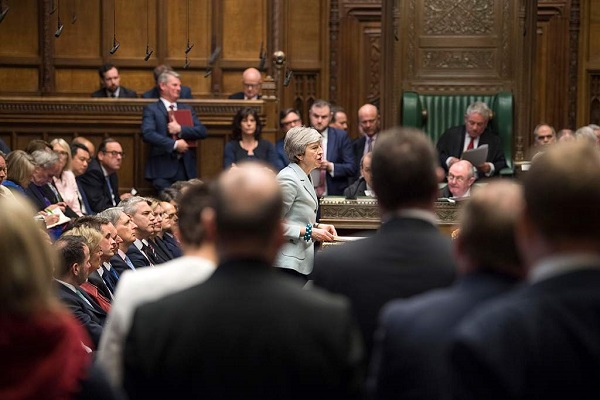 A handout photograph released by the UK Parliament shows Britain's Prime Minister Theresa May making a statement in the House of Commons in London on March 25, 2019 outlining the next steps that parliament will take in the Brexit process. (Photo: VCG)

They were among 30 members of May's Conservative party who defied her to vote in favour of a motion giving MPs control of parliamentary business later this week to try to come up with an alternative Brexit plan.

In his resignation letter, Harrington said the government's approach was "playing roulette with the lives and livelihoods of the vast majority of people in this country".

He said he would do "all I can" to avoid Britain leaving the EU with no deal.

"As the UK's industry minister, the clear message I have been receiving from the business community is that the failure to secure a deal and to rule out a hard Brexit is resulting in cancelled investment decisions, business being placed abroad, and a sense of ridicule for British business, across the world," he wrote.